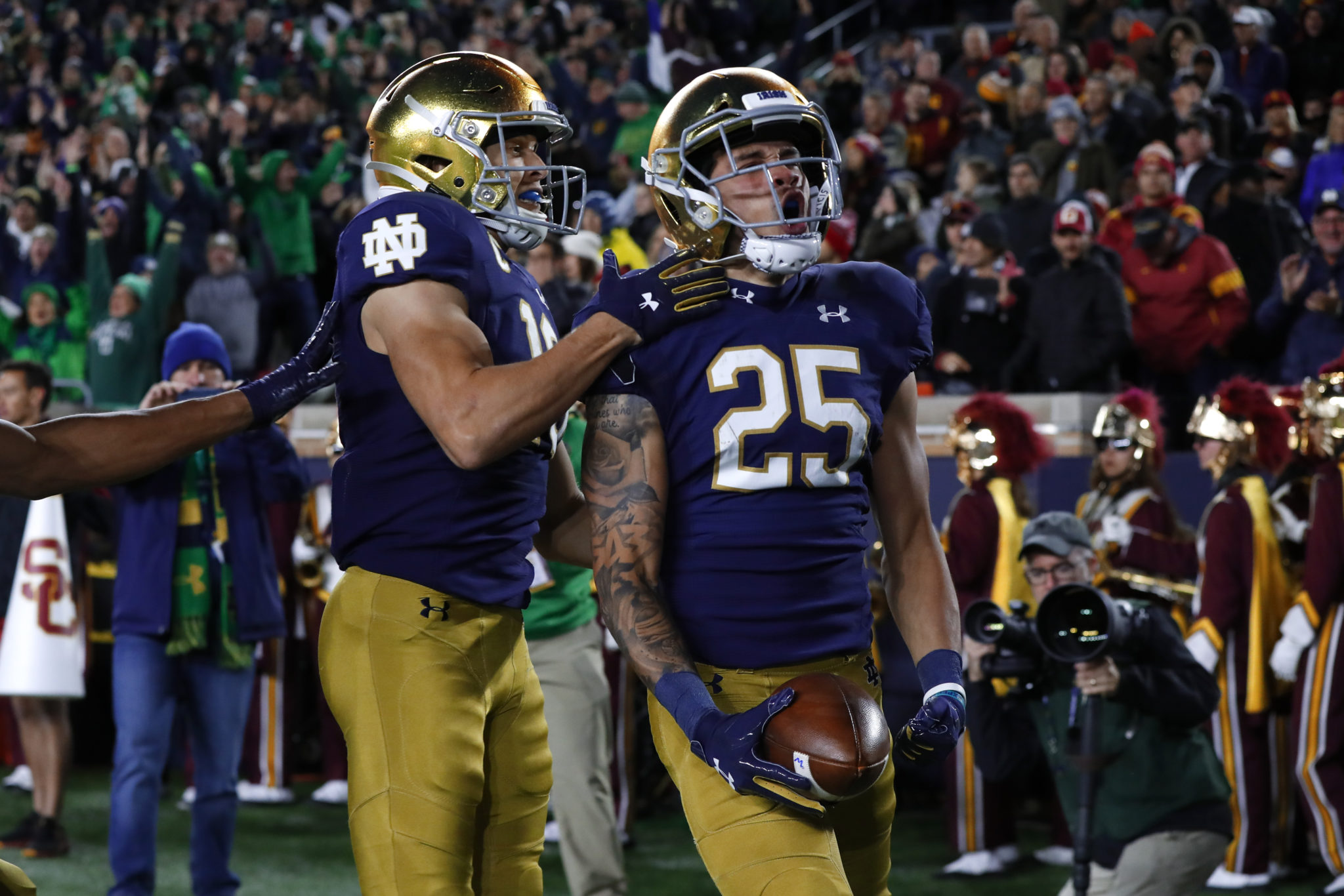 “An exciting football game,” coach Brian Kelly said. “Our guys prepared so well for this game. They (USC) were coming off a bye week and we knew there were some things we’d have to adjust to. We took USC’s best shot.”

Book, who rushed for 49 yards and added 165 yards through the air on 17-of-32 passing, credited offensive coordinator Chip Long for “great play calling. They were bringing pressure off the edge, so I just wanted to bring it up the middle. The line did a good job.”

The Trojans’ Markese Stepp, who ran for 82 yards, scored from the 2 with 1:04 left to make it 30-27. But Notre Dame’s Brock Wright recovered the onside kick, and the Irish ran out the clock.


“Notre Dame is a good football team and we are, too, and I can’t wait to watch the next six games,” said USC coach Clay Helton, who fell to 1-4 against Notre Dame.

The Irish led 17-3 at half after Book threw a 10-yard TD pass to Cole Kmet, wide receiver Braden Lenzy ran 51 yards on a reverse and Doerer kicked a 43-yard field goal. The half ended with the teams engaging in some pushing and shoving before they headed to their locker rooms.

Doerer added field goals of 52 and 43 yards in the second half to keep the Irish ahead.

USC freshman Kedon Slovis completed 24 of 35 passes for 255 yards in his first game back from a concussion three weeks ago.

Slovis threw touchdown passes of 38 yards to Amon-Ra St. Brown in the third quarter and 5 yards to Tyler Vaughns in the fourth.

USC: Slovis completed 10 of 17 passes for 74 yards in the first half but was sacked three times and hurried on four other occasions by Notre Dame’s defense, which switched between three- and four-man fronts. After intermission, Slovis was 14 of 18 for 181 yards and two touchdowns.

Notre Dame: The Irish punted on their first three series but finished the half with 196 yards on the ground. Jones carried the load, bursting up the middle for 43 yards on a nine-play, 97-yard scoring drive that gave his team a 7-3 lead.

Notre Dame: The Irish likely won’t move up even with South Carolina’s 20-17 double-overtime victory at No. 3 Georgia. That’s because the Irish lost 23-17 at Georgia last month.

Notre Dame has an open date before an Oct. 26 visit to No. 16 Michigan.