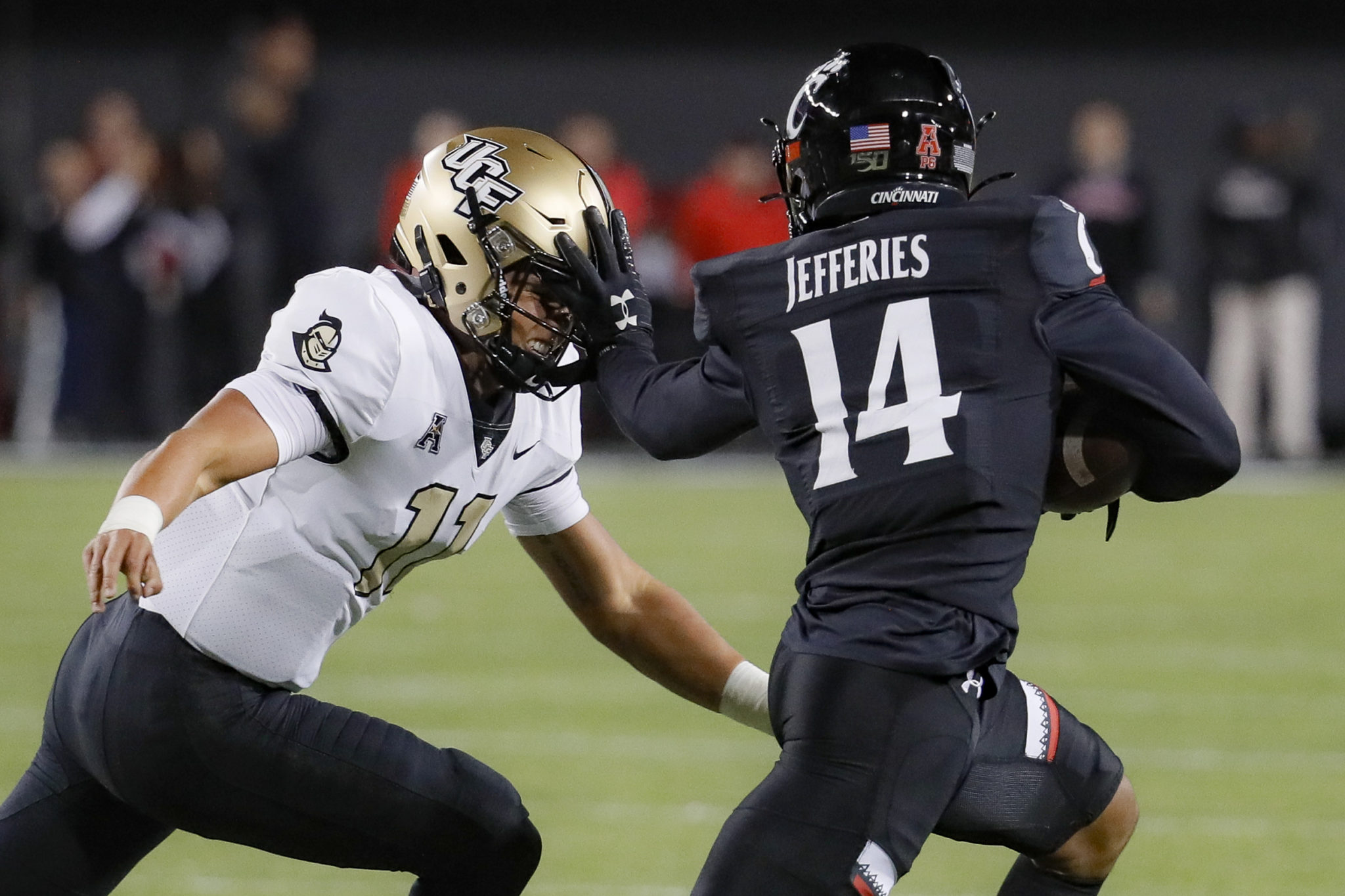 As a reward for his game-turning interception, freshman cornerback Ahmad Gardner was invited to address teammates in the locker room as Cincinnati Bearcats celebrated a breakthrough win.

Nothing shy about this freshman, on the field or in front of the team.

“We brought him up to say a few words, and we had to cut him off,” coach Luke Fickell said.

There was plenty to talk about after the Bearcats finally beat the team that had dominated them, taking control of the American Athletic race with quite a defensive performance.

Gardner returned an interception for a go-ahead touchdown and Cincinnati clamped down on freshman quarterback Dillon Gabriel and No. 18 UCF’s high-scoring offense Friday night for a 27-24 victory that ended the Knights’ streak of 19 conference wins.


After getting blown out their last two games against the two-time defending American Athletic champs, the Bearcats (4-1, 1-0) gave themselves an early edge in the race by finding a way to finally keep up with UCF (4-2, 1-1). They rotated cornerbacks and safeties to keep them fresh against UCF’s quick-snap offense.

That approach made the difference in front of a capacity crowd that stormed the field. The Bearcats had lost their last 13 straight games against ranked teams since 2009.

“The biggest win for this school in a long time,” tight end Josiah Deguara said.

In addition to Gardner’s 16-yard interception return, the Bearcats picked off Gabriel’s passes at the Cincinnati 2 and 6 as they took control and closed it out, taking advantage of his inexperience.

“He’s a freshman,” Gardner said. “We were going to try to get into his head. That’s what the adjustment was. It worked.”

UCF’s Tre Nixon turned a short pass into a 45-yard touchdown that cut it to 27-24 with 3:11 to go, but the Bearcats ran out the clock, converting a fourth-and-1 at midfield in the closing seconds.

“I guess there’s no sweeter way to seal the deal against a team that’s the best in the league, been the best the last two years,” said Fickell, who didn’t hesitate to call the quarterback sneak. “The only way you’re going to knock off the best is to continue to be aggressive. The only way you beat the best is to take those chances.”

It was a deflating performance for the Knights, who had several cherished streaks snapped.


Gabriel came in leading the AAC in passing efficiency, but finished 25 of 46 for 297 yards with three decisive interceptions against a pressing defense that dared him to throw deep. The true freshman also botched a handoff at the UCF 19 that set up the first of Desmond Ridder’s two touchdown passes and got the crowd chanting “Overrated!”

“Three turnovers are unacceptable,” Gabriel said. “I didn’t do my part.”

The Knights had scored at least 30 points in each of their last 31 games, the longest such FBS streak since 1936. The four turnovers made the difference.

Ridder was 17 of 31 for 149 yards. He also threw an interception that set up Greg McCrae’s 1-yard touchdown run with 58 seconds left in the half that put UCF ahead 16-10 lead.

Gardner changed the game by stepping in front of a sideline pass and returning an interception 16 yards untouched in the third quarter, and Gabriel couldn’t rally the Knights.

Michael Warren II had a 61-yard run that set up Ridder’s second touchdown pass early in the fourth quarter for a 27-16 lead.

UCF: The Knights’ lack of experience at quarterback cost them their long streaks of conference wins and 30-point games.

Cincinnati: After giving up 51 and 38 points in its last two losses to UCF, the Bearcats started preparing for their quick-snap offense during camp. After UCF opened the game with a field goal drive, the Bearcats’ defense settled in and took control.

UCF’s second straight road loss leaves the Knights in a tenuous spot. They were ranked No. 15 when they lost at Pittsburgh 35-34 on Sept. 21.

The Knights have a rushing and a passing touchdown in their last 32 games, the longest current streak in the FBS.

UCF is off next week before hosting East Carolina on Oct. 19.

Cincinnati plays at Houston on Oct. 12.