Herbert rallies No. 12 Oregon past No. 25 Washington 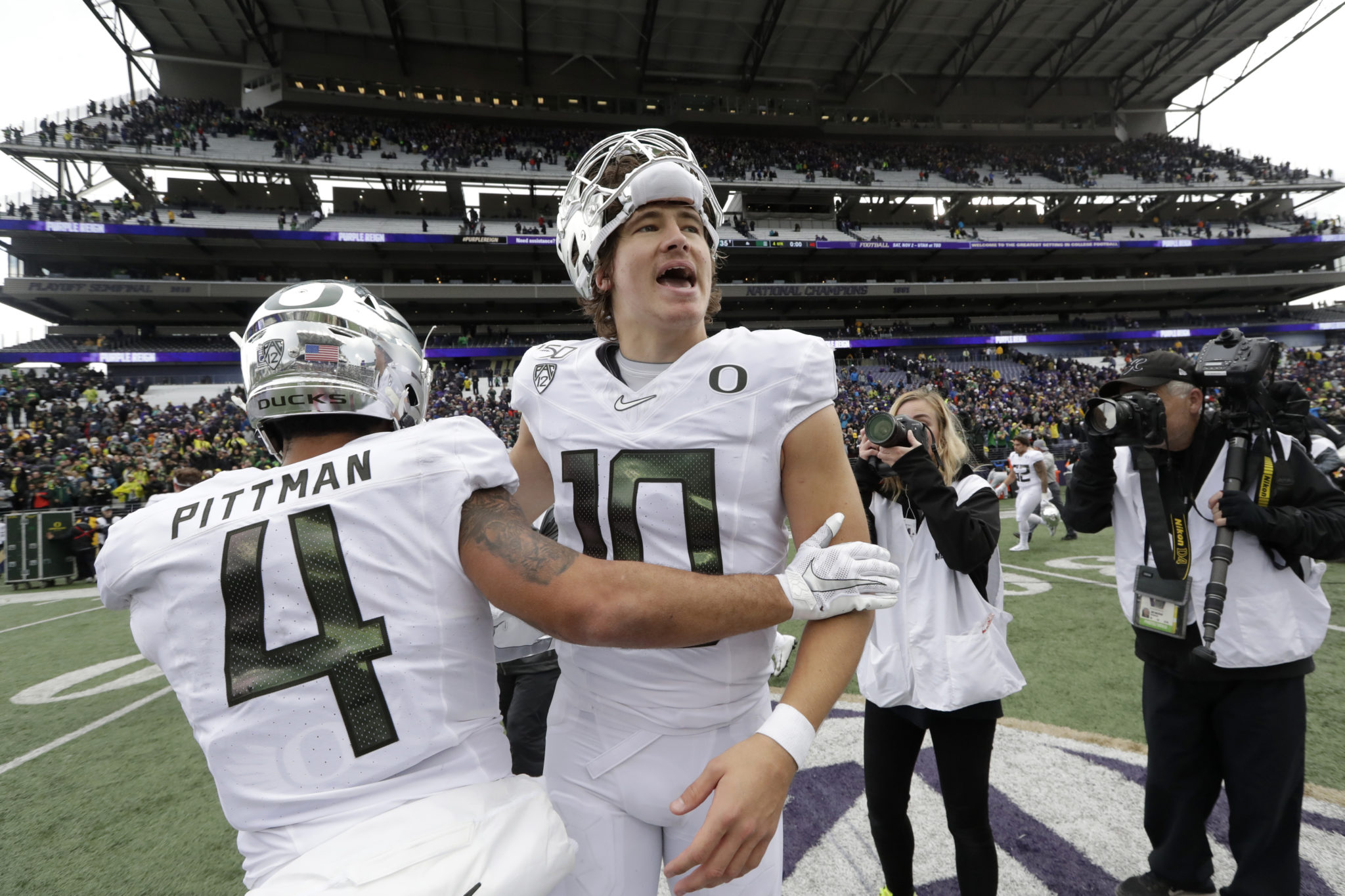 For all he’s accomplished in his Oregon career, Justin Herbert had never faced the challenge of rallying from this much of a deficit, on the road and against the Ducks’ most hated rival.

Doing so would all but lock up the Pac-12 North, keep Oregon on the very fringes of the College Football Playoff conversation and put a nail in Washington’s hopes of repeating as conference champs.

“I don’t even think we did that in high school. It was a lot of fun today and glad we got the win,” Herbert said.

Herbert capped Oregon’s rally from a 14-point second-half deficit with a 5-yard TD pass to Jaylon Redd with 5:10 left, and No. 12 Oregon rallied to beat No. 25 Washington 35-31 on Saturday.


What was expected to be a defensive showdown turned into an offensive shootout with both Herbert and Washington quarterback Jacob Eason taking the spotlight.

Down 28-14 after Puca Nacua caught a 33-yard TD pass from Eason on the opening drive of the second half, Oregon’s touted defense finally showed up and gave Herbert a chance to rally the Ducks. The Ducks pulled within 31-28 on the final play of the third quarter when a well-designed screen pass on fourth-down found Mycah Pittman, and the freshman raced untouched 36 yards for the score.

The Ducks’ defense forced consecutive three-and-outs, and Oregon marched its way to the go-ahead score. Between Travis Dye and Cyrus Habibi-Likio, the Ducks went 70 yards in 3 ½ minutes, and Herbert found Redd in the flat for the final 5 yards and the lead. It was the last of Herbert’s four TD tosses.

“We talk about the harder it gets the better we play and that showed up in the second half,” Oregon coach Mario Cristobal said.

The victory gave Oregon (6-1, 4-0 Pac-12) complete control in the North Division. Four of the five other teams already have three conference losses, with Oregon State at 2-2 the closest to the Ducks.

Washington (5-3, 2-3) reached the Oregon 38 with 2 ½ minutes left, but Eason was sacked on second and 6 by Popo Aumavae and lost 12 yards. It was the first sack of the game by either team.

The Huskies faced third and 23 after a false start but got 20 yards back on a pass to Marcus Spiker. On fourth and 3, Eason’s pass for Nacua was high and the Ducks celebrated a second straight win over their rivals. Washington argued there should have been pass interference on the throw to Nacua.

“What did it look like to you guys? You guys got a better vantage than me. I think we know,” Washington coach Chris Petersen said.

Whether it was interference on not, Washington helped give away the game with its stagnant fourth-quarter on offense. After exposing Oregon’s defense in ways it hadn’t during its five-game win streak since dropping its season opener to Auburn, the Huskies had just 52 yards of offense and two first downs in the fourth quarter.

Eason was 23 of 30 for 289 yards and three touchdowns. He was nearly perfect for a stretch of the second and third quarters when he threw TD passes 48 yards to Jordan Chin, 5 yards to Andre Baccellia and his strike to Nacua through a tiny passing window.


But the Ducks made the plays it needed to in the fourth quarter to get Washington off the field and the ball back in Herbert’s hands.

“Our defense ended up playing well at the end. I don’t think our defense played poorly,” Cristobal said.

Habibi-Likio had 81 yards rushing and a 14-yard touchdown . Oregon finished with 154 yards rushing, with 108 coming in the second half.

Salvon Ahmed rushed for 140 yards and a score for Washington. The Huskies tried direct snaps to running backs on three third-and-short situations, and all came up short.

Washington was without second-leading rusher Sean McGrew for “health reasons,” according to the school. McGrew rushed for 106 yards in the win over Arizona and had 110 yards earlier this season against BYU. Washington was already without Richard Newton (foot).

Washington also played the majority of the game without leading receiver Aaron Fuller, who was in briefly in the first quarter and never returned. Petersen said Fuller was banged up. Washington WR Chico McClatcher, who has suffered several leg injuries in his career, limped off the field after being tackled awkwardly on a screen pass in the third quarter.

Oregon cornerback Deommodore Lenoir was injured midway through the second quarter and went immediately to the locker room.

Oregon: The Ducks’ defense that allowed four touchdowns all season gave up three in the first half to Washington. Oregon had allowed one touchdown in its previous 63 opponent drives entering the game, but Washington scored TDs on consecutive first-half possessions. The Huskies’ 414 total yards were the most allowed this season.

Washington: The Huskies averaged 6.5 yards per play but were just 3 of 13 on third downs.