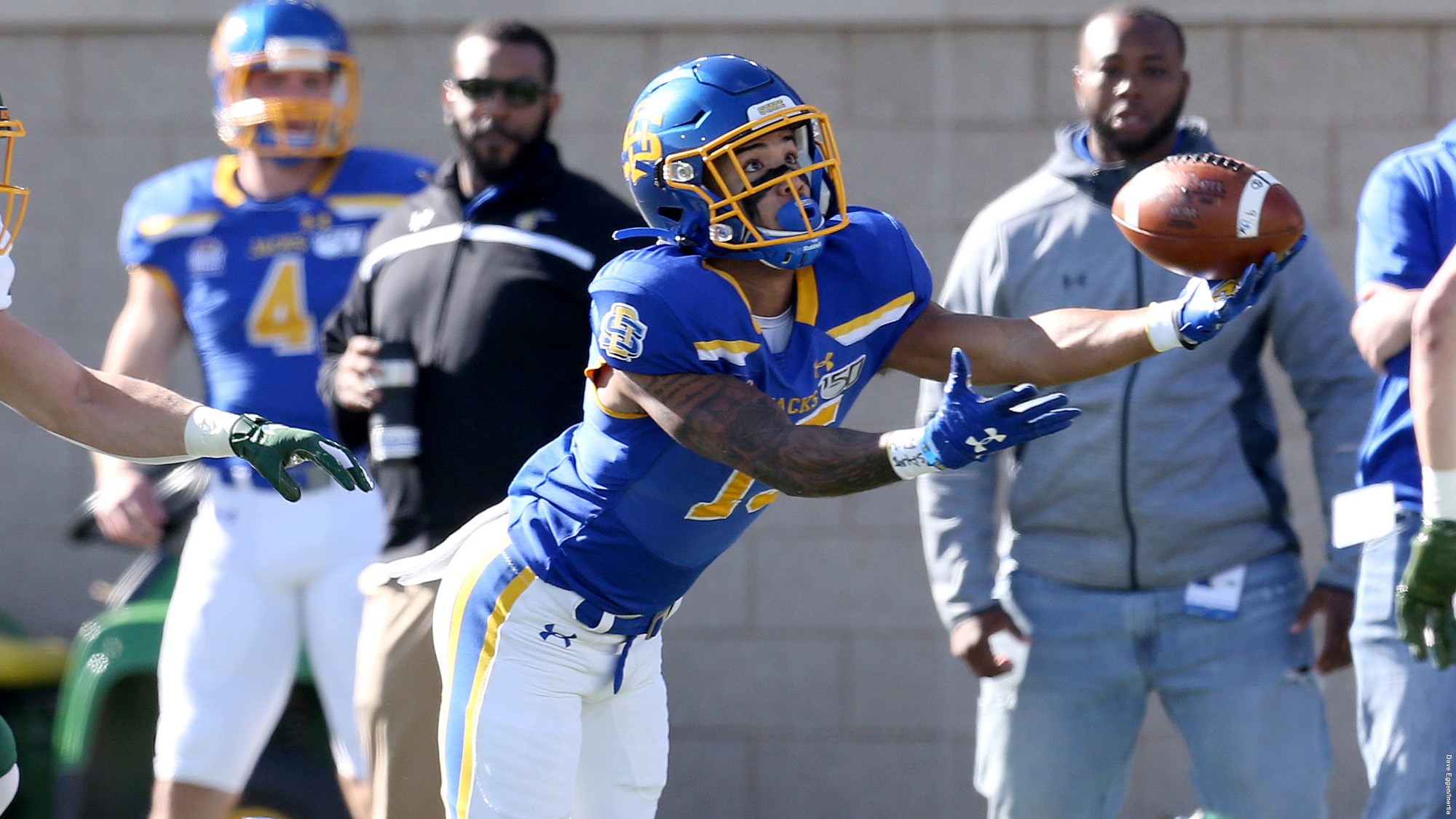 With the game tied, a gutsy decision to go for it on fourth-and-a-foot from their own 29-yard line in the closing minutes of the fourth quarter proved to be the difference as North Dakota State (8-0) narrowly defeated South Dakota State 23-16 on Saturday before a stunned crowd of 19,371 at Dana J. Dykhouse Stadium in Brookings, S.D. — site of ESPN’s College GameDay broadcast earlier in the day.

Needing less than a yard for a first down, North Dakota State’s Adam Cofield broke free around the right tackle and raced 71 yards for the game-winning touchdown, giving the top-ranked defending national champions their 29th straight victory — four shy of its own FCS record of 33 straight wins from 2012-14.  NDSU’s last defeat came at the hands of South Dakota State on Nov. 4, 2017.

With the victory, the Bison, winners of seven of the last eight Football Championship Subdivision national titles, claimed the coveted Dakota Marker for the third consecutive year.

Despite losing starting quarterback J’Bore Gibbs to a knee injury in the opening period, South Dakota State led 6-3 at halftime, courtesy of a pair of field goals by Chase Vinatieri, a nephew of NFL kicker Adam Vinatieri.  Vinatieri added a third field goal from forty yards late in the third quarter to put the Jackrabbits within striking distance of their biggest rival.


The injured Gibbs, a redshirt freshman from Chicago, watched the rest of the game from the sidelines wearing a brace and a large icepack on his right knee.  Gibbs, who threw ten touchdown passes and rushed for four more in his five previous starts this season, completed three of five passes for seventy yards before exiting the game.

The Jacks completed only four of twelve passes for forty yards following the game-ending injury to Gibbs.

Trailing 16-9, third-string quarterback Keaton Heide scored on a three-yard keeper, capping a nine-play, eighty-yard drive that knotted the score at 16-16 with 7 minutes and 22 seconds remaining in the game.  Heide, a true freshman from Wayzata, Minnesota, had replaced backup quarterback Kanin Nelson midway through the game-tying 80-yard drive.

The Jackrabbits had a chance to pull ahead in the final five minutes, but a pass from Heide was intercepted by cornerback Josh Hayes at the North Dakota State 15-yard line, setting the stage for Cofield’s dramatic game-clinching sprint a few plays later.

With the victory, North Dakota State moved into sole possession of first place in the Missouri Valley Football Conference, a game ahead of SDSU, which saw its fifteen-game home winning streak come to an abrupt end, Illinois State and Northern Iowa.  Having already defeated all three teams, North Dakota State would have to lose two of its remaining conference games to be overtaken in the MVFC.

The loss was hugely disappointing for the South Dakota State faithful and especially for head coach John Stiegelmeier, but the 23-year mentor remains optimistic.  Acknowledging that it was a painful loss, Stiegelmeier believes his team will learn from the experience.  “I think these guys are going to respond like champions.  I know they will,” he said in a post-game interview.

“At some point,” he continued, “we want to prove we’re the better team.”

There’s a good chance his team will get another shot at the reigning national champions during the FCS playoffs, where South Dakota State is likely to be highly seeded despite Saturday’s disappointing setback.

The Jackrabbits, who had won six consecutive games after a narrow 28-21 season opening loss to Minnesota — one of only nine remaining undefeated teams in the FBS — travel to Springfield, Missouri, next weekend to face Missouri State while North Dakota State will look to extend its winning streak to thirty games when it travels to Ohio to take on the pesky Penguins of Youngstown State.