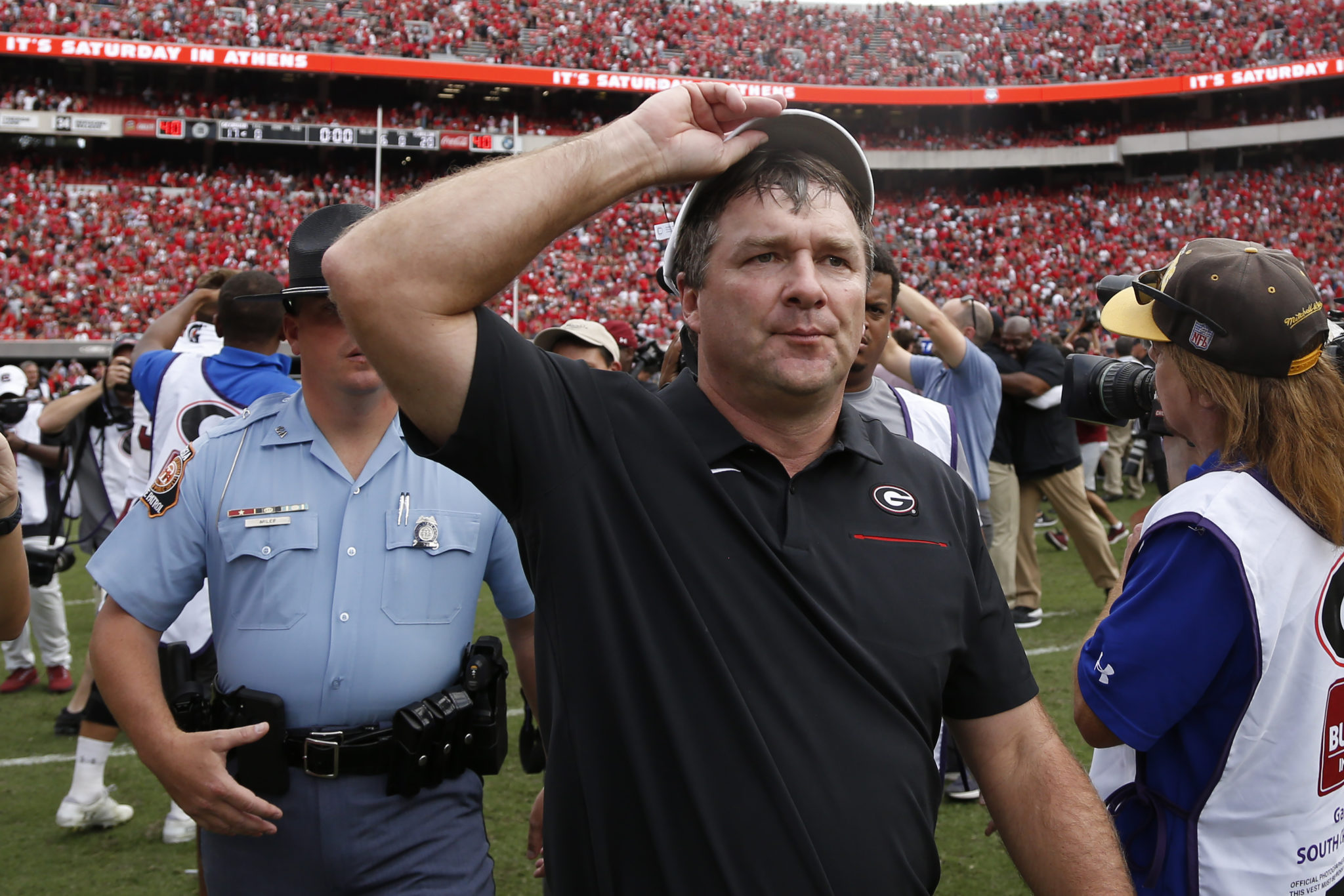 The first warning signs came in slow starts against Notre Dame and Tennessee.

Georgia’s full-fledged reality check arrived when another slow start ended with a double-overtime loss at home to unranked South Carolina.

Coach Kirby Smart’s new reality: Georgia isn’t as dominant as it appeared when it was 5-0 and No. 3 in the Top 25.

The shocking 20-17 loss to South Carolina on Saturday provided the proof. Jake Fromm’s first three interceptions of 2019, packaged with Rodrigo Blankenship’s first two missed field goals, only made the bitter result more inescapable in a game where the Bulldogs were favored by 24½ points. Georgia dropped to No. 10 in the Top 25 released Sunday.

The Bulldogs (5-1, 2-1 Southeastern Conference) won’t be mentioned in national conversations with Clemson, Alabama and Ohio State this week. That’s OK with Smart. For now, the coach wants his team to keep its focus internal.

“This is when you find out about yourself,” Smart said. “You look in the mirror and say ‘What can I do better?’ As coaches and leaders of the team, we’ve got to do what helps our guys.”

Georgia, which plays Kentucky in another home game on Saturday, can still try to win the SEC East for the third straight year. But for any fans — or players — looking ahead to Georgia’s game against Florida on Nov. 2 in Jacksonville, Smart warned that Kentucky could be as dangerous as South Carolina.

There will be much talk about turnover margin this week. Four turnovers on Fromm’s three interceptions and fumbled snap were too much to overcome in almost any scenario, especially when South Carolina had no giveaways.

There also will be talk about playing more physical. The Bulldogs’ offensive line, widely praised as the biggest and perhaps most dominant in school history, was unable to wear down South Carolina’s defensive front.


“I think they finished better than we did,” Georgia guard Ben Cleveland said of the Gamecocks. “Our defense as a whole played lights out the whole game. We couldn’t pull through on the offensive side of the ball a couple times.”

Smart issued a postgame challenge to the line.

Smart said he’s not worried about Fromm, a three-year starter. The junior had completed 78% of his passes without an interception through five games. The big difference Saturday was the increased pressure Fromm faced when the running game sputtered.

“I believe in Jake Fromm,” Smart said. “Jake Fromm is a leader of men.”

Georgia ran for 173 yards, well below its SEC-leading average of 250. Expect the Bulldogs to emphasize the ground game this week in hopes of returning to that average — and eliminating the turnovers.

“We didn’t execute real well,” Smart said. “We didn’t play clean. We didn’t do a good job protecting the ball. If you turn the ball over, you will get your butt beat.”

For Georgia to dominate, it must be a run-first team managed by Fromm instead of a pass-happy offense. D’Andre Swift posted acceptable totals of 113 yards rushing on 23 carries, but Zamir White and James Cook combined for only 54 yards on 14 carries. Brian Herrien, who led Georgia in rushing in a win over Tennessee, was held out with back spasms.

“We had some rushing yards, but it wasn’t the dominant line of scrimmage we like to have,” Smart said.