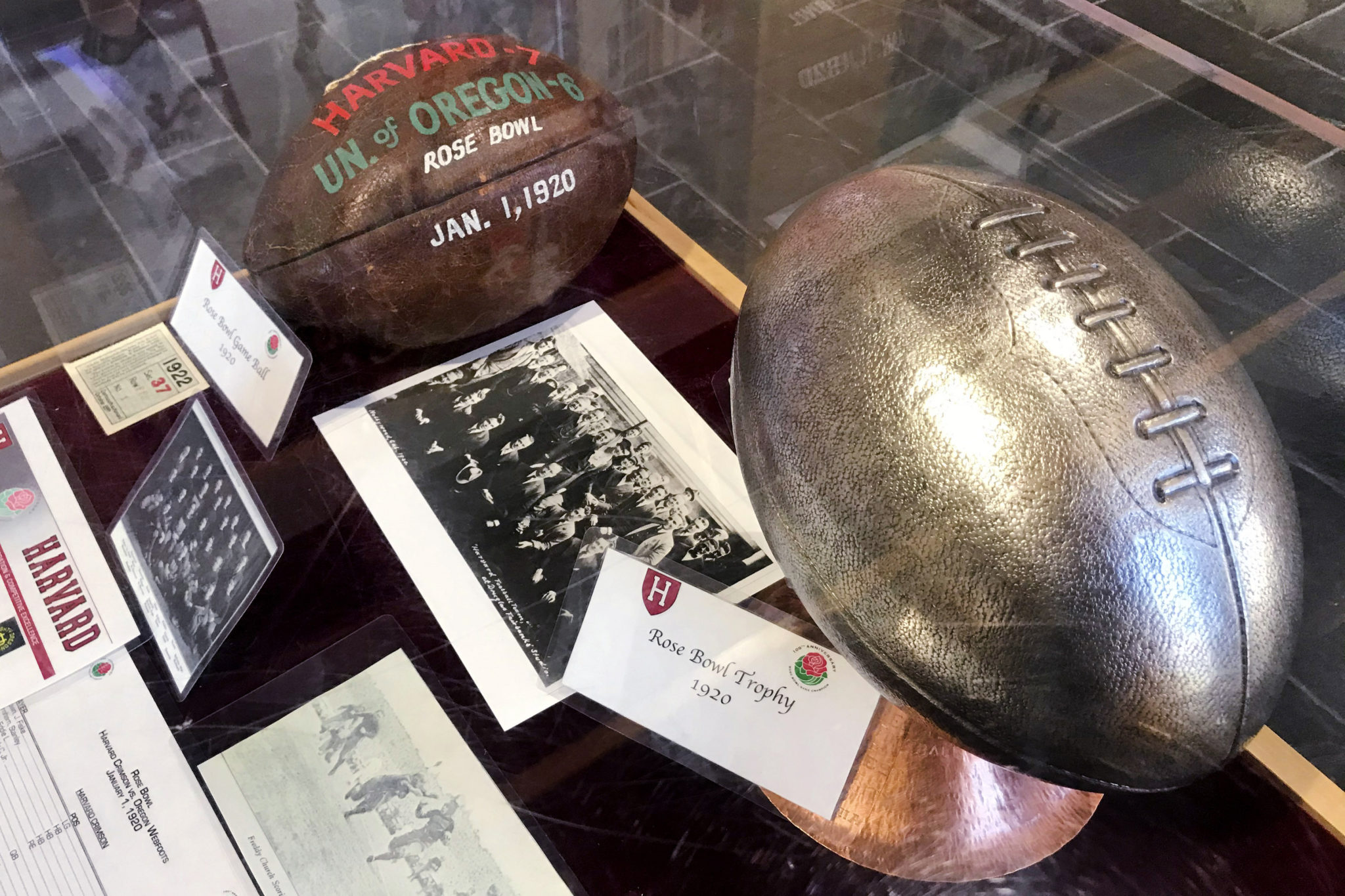 Potential Harvard football players can expect to be sold on the school’s elite academics and a history that includes eight U.S. presidents, more than 150 Nobel laureates and too many CEOs to count.

What often surprises them when they walk into Harvard Stadium for the first time is seeing the seven national championships celebrated along the colonnade — the last in 1919 — and even a Rose Bowl banner from when The Granddaddy of Them All was still just a baby.

“Going through the generations, from millennials to Gen X, Y and Z, most of the kids in the 21st century that we’ve recruited are kind of surprised that Harvard won a Rose Bowl,” coach Tim Murphy said this week as the school prepared to celebrate the 100th anniversary of its only postseason appearance. “There’s a little bit of shock and awe that, ‘Wow, Harvard was playing those types of games?’ And the answer was, ‘Yes.'”

Long before Notre Dame and Alabama emerged as football powers, before the NFL was founded, before Michigan and Ohio State became rivals or Oklahoma even became a state, the heart of the sport was in the Northeast, among the schools that would form what is now the no-scholarship, Football Championship Subdivision Ivy League.


Leather-helmeted two-way players from Yale and Princeton ran and kicked their way — the forward pass would come later — to 23 of the first 25 unofficial national championships. Harvard won the other two, adding five more from 1898-1919.

And they had playing fields worthy of their rank.

New stadiums at Harvard and Princeton held more than 40,000 fans at a time that baseball’s biggest park, New York’s Polo Grounds, fit 34,000. The Yale Bowl opened in 1914 with 70,000 seats, making it the largest stadium in the world; its design would be copied by the Tournament of Roses in 1922 when it sought a larger home for its showcase game, and its shape gave birth to name “Rose Bowl,” which spilled over to the game itself, along with similar football spectacles all the way up to the Super Bowl.

“At the time, Harvard, Yale and Princeton were like Alabama, Clemson and LSU are now in terms of their status in college football,” said Richard Johnson, the curator of the New England Sports Museum. “We’re talking about teams that were absolutely at the pinnacle.”

With a roster replenished by students returning from World War I, Harvard won its first six games in 1919 by a combined score of 179-0 and then rallied for a tie against Princeton 10-10 that was as momentous for the time as the famous 29-29 “victory” in The Game 50 years later. It took a trick play to beat Yale 10-3 and finish the season unbeaten.

Out in Pasadena, California, the Tournament of Roses Association was hoping to give its football game the 20th century equivalent of a reboot after the inaugural game between Stanford and Fielding Yost’s Michigan in 1902 was such a blowout that the westerners quit in the third quarter, trailing 49-0.

“The game didn’t meet a lot of our standards and goals. It was kind of chaotic,” said Scott Jenkins, the current chairman of the Rose Bowl Management Committee. “We gave it up until 1916.”

And then came the war.

“It wasn’t easy finding teams. A number of military teams were brought in,” Jenkins said this week. “This was kind of a return toward normalcy. That was the feeling of January 1920: to get beyond World War I.”

Unbeaten Oregon, known as the Webfoots, was the top team in the West. Harvard had been invited before but declined because the school’s Christmas break was too short for the transcontinental train ride that would take them five days, one-way.

This year, the schedule worked out.

The 22-man team boarded the train west, stopping in Detroit, Chicago, Omaha, Reno, Green River (Wyoming) and Oakland, with alumni groups greeting them along the route. Players exercised on station platforms when the train stopped to refuel; according to the book “Crimson in Triumph,” a history of the school’s athletic program, coach Bob Fisher held practices on the streets of small towns along the way.

“How cool is that?” Johnson said. “They became the darlings of the community out there. I’m surprised no one’s written a movie script about it.”

The crowd for the sixth Tournament East-West Football Game, on New Year’s Day 1920, overflowed the 30,000-seat capacity at Tournament Park into the standing room — the biggest attendance for the event yet. Fred Church scored the game’s only touchdown on a 13-yard run in the second quarter. Oregon made it a one-point game before the half, then missed three drop-kick field goal attempts in the second.

Eddie Casey was responsible for more than half of Harvard’s total 205 yards of offense, with 49 yards rushing and 59 yards receiving. The 155-pound halfback and defensive back, who spent the previous two years in the Navy, was the game’s MVP.

“Certainly a lot of the rules have changed. And the nature of the athletes have changed,” Jenkins said. “Back then having a school like Harvard in our game, those people typically weren’t there to go on to professional sports. They were there for the academics.”

Jenkins was in Boston this week to help Harvard commemorate the only bowl berth in its 145-year football history. The Crimson are wearing Rose Bowl patches on their uniforms and commemorative helmet stickers this season; at halftime of Saturday’s game against Dartmouth, the bowl delegation presented the school with a plaque.

Casey will be inducted into the Rose Bowl Hall of Fame this year, and Murphy will represent Harvard in Pasadena.

“We were at the forefront of football for a long time. We take a lot of pride in that,” said current Harvard captain Wesley Ogsbury, a defensive back and economics major who is listed at 185 pounds.

But, since 1920, the history hasn’t included any other postseason play.

Harvard, Yale and Princeton voted a few years later to turn down bowl invitations. Future Ivies continued to rank among the best in the nation into the 1920s before the sport’s balance of power shifted south and west.

The conference, which was formalized in 1954, also sits out the FCS playoffs, meaning Harvard’s all-time postseason record is still 1-0 and likely to remain that way.

That gives Murphy mixed emotions: He is the only coach among Harvard’s 42 varsity teams that can’t play for a national championship, but he also knows that a postseason would diminish the importance of the season-ending grudge match against Yale, known as The Game.

“Every year we end our season with a bowl game. Whether at Harvard Stadium or the Yale Bowl, that is by far the biggest game we play, even if we went to the playoffs,” he said.

“For me, nothing is better than that.”