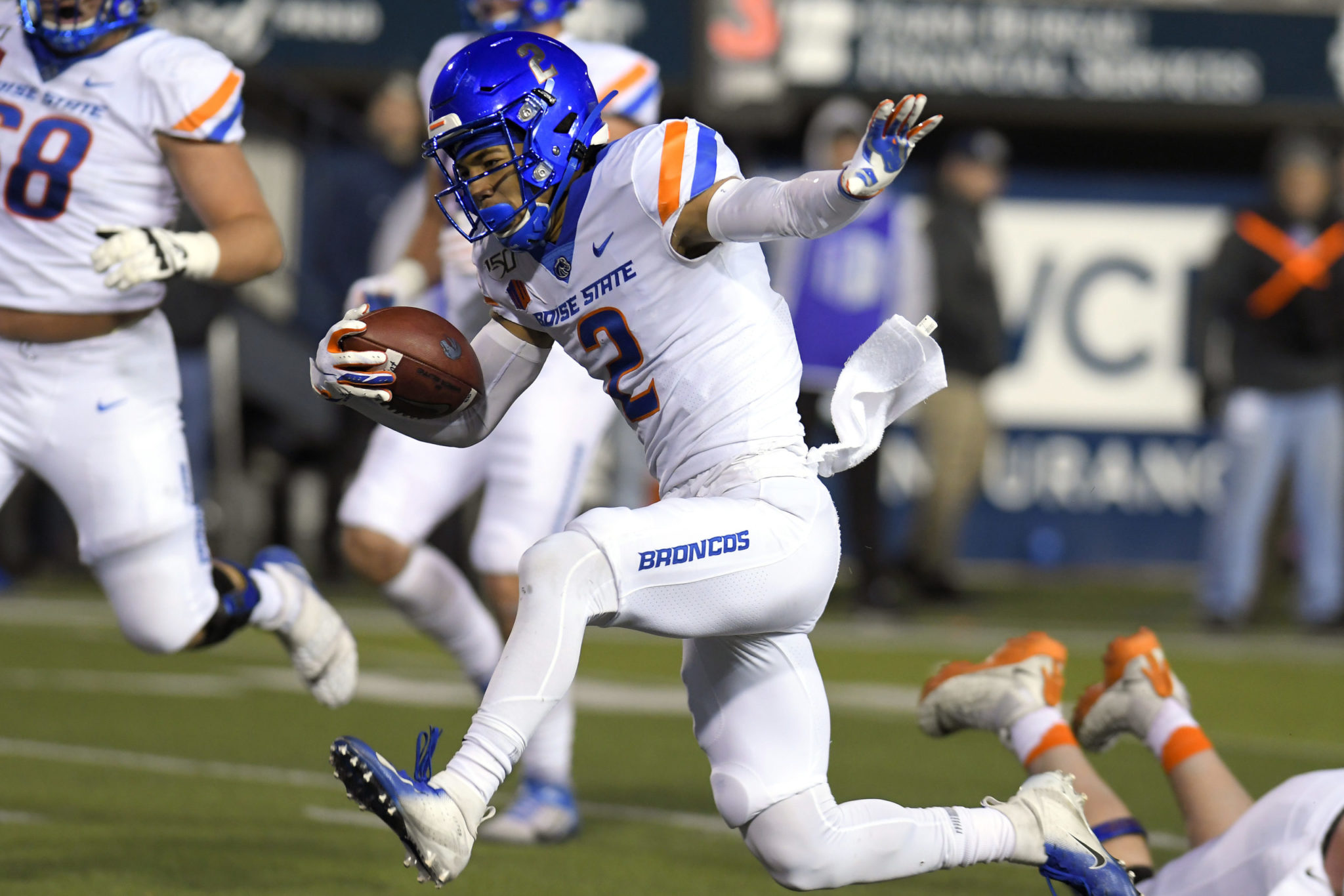 George Holani ran for a career-high 178 yards and two touchdowns, powering No. 20 Boise State to a 56-21 victory over Utah State on Saturday night.

Jaylon Henderson threw for 187 yards and three scores in his second start as Boise State (10-1, 7-0 Mountain West) clinched a share of the Mountain Division title and a berth in the Mountain West Conference championship game for the third straight season.

Jordan Love threw for 229 yards and a touchdown to lead the Aggies (6-5, 5-2), who lost to the Broncos for a fourth consecutive season.

Holani averaged 11.1 yards per carry to pace a Boise State rushing attack that churned out a season-best 297 yards on the ground. The Broncos averaged 6.5 per carry.


Holani burned Utah State for big gains starting in the first quarter. The freshman opened each of Boise State’s first three drives with a run exceeding 10 yards. Holani’s first carry turned into a 35-yard gain. He also scored on a 5-yard Statue of Liberty play on his final attempt of the quarter.

It added up to 115 yards on eight carries for Holani in the first quarter alone. That set the tone for a game filled with big plays by the Broncos.

Boise State needed only four plays to score on its opening drive. John Hightower shedded tacklers on a 30-yard catch-and-run to put the Broncos ahead 7-0. Utah State evened the score on a 7-yard catch by Caleb Repp.

Then the dam burst, and Boise State consumed the Aggies on both sides of the ball.

Jalen Walker returned an interception 15 yards with 5:14 left in the first quarter to put the Broncos ahead for good. Holani followed with his Statue of Liberty touchdown late in the period — which he set up with a 36-yard run a play earlier.

Boise State kept it rolling into the second quarter. Holani and Robert Mahone each scored on a 1-yard run and Khalil Shakir hauled in a 14-yard pass from Henderson with 19 seconds left in the half to make it 42-7.

Avery Williams added an exclamation point by returning a punt 74 yards early in the third quarter to extend Boise State’s lead to 49-7.

Boise State could climb a spot or two in both the AP and CFP rankings after an emphatic road victory.

Boise State: It doesn’t seem to matter who the Broncos plug in at quarterback because their offense keeps running over opponents at full steam. Boise State averaged 7.5 yards per play in the first half and rolled up 383 total yards by halftime.

Utah State: An inability to stop Boise State’s ground game doomed the Aggies to their most lopsided loss since the 2017 season opener at Wisconsin. Utah State also struggled to answer on offense, punting six times and turning the ball over once through the first three quarters while the Broncos ran off 49 straight points.