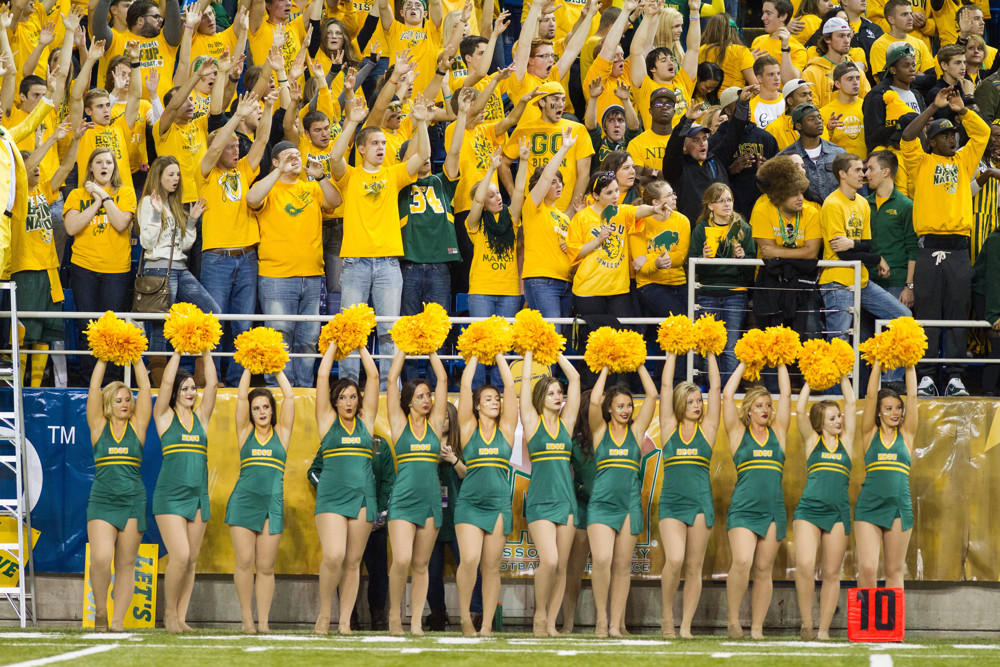 Top-ranked North Dakota State (11-0) and second-ranked James Madison (10-1) were among a half-dozen teams that won their regular season conference titles and automatic bids to the 24-team Football Championship Subdivision playoffs with victories on Saturday.

In winning its thirty-second consecutive game and clinching the Missouri Valley Football Conference for the ninth straight year, North Dakota State gained 700 total yards — the third most in program history — while running roughshod over the University of South Dakota Coyotes 49-14 before a crowd of 17,844 at the Fargodome yesterday afternoon.

Eight different NDSU running backs amassed 419 yards on 52 carries and starting quarterback Trey Lance completed 12 of 15 passing for 249 yards and a pair of touchdowns in the lopsided contest.

Scoring on its first four possessions, the Bison jumped out to a 28-0 lead midway through the second quarter and coasted to victory.


James Madison University, which entered Saturday’s action with a two-game lead in the Colonial Athletic Association, clinched the conference title and its automatic bid with a resounding 48-6 win over visiting Richmond (5-6).

It was JMU’s tenth straight victory after losing narrowly to FBS West Virginia in the season opener.

RMU had entered the game tied with Central Connecticut at a perfect 5-0 in NEC action.

CCSU, which nearly defeated FBS Eastern Michigan earlier this season, was led by senior quarterback Aaron Winchester, who rushed for four touchdowns and passed for another.  The Blue Devils set a new school record in posting their tenth win of the season.

Wofford (7-3) claimed the Southern Conference championship and its automatic berth in the FCS playoffs by defeating league-leading Furman 24-7 at Gibbs Stadium in Spartanburg, S.C.  The victory gave the 20th-ranked Terriers a share of the conference title, but Chattanooga’s 34-33 thriller over Citadel later in the day gave Wofford the outright regular season championship.

It was Wofford’s third straight conference title and seventh since joining the Southern Conference in 1997.

Monmouth (9-2), which defeated preseason favorite Kennesaw State 45-21 a couple of weeks ago, clinched its first Big South championship in history with a surprisingly easy 47-10 win at Campbell (6-4).

Trailing 7-0 midway through the second quarter, Monmouth completely dominated the Camels the rest of the way as junior running back Pete Guerriero established a new program record with 303 all-purpose yards, including a career-high 237 rushing yards, while scoring four touchdowns.


The University of San Diego (8-2), which opened the 2019 season with back-to-back losses to Cal Poly and UC Davis, won its eighth straight game and clinched the Pioneer League championship yesterday with a 52-20 rout of Morehead State (5-6).  It was USD’s 36th consecutive conference victory.

It was the thirteenth straight time that the Toreros had defeated Morehead State.

By winning the league championship — its sixth in a row (San Diego and Dayton shared the title in 2015) — and the league’s automatic bid, USD will be making its fourth straight FCS playoff appearance and its fifth in the last six seasons.

The remaining four automatic qualifiers in the Football Championship Subdivision — the Big Sky, Ohio Valley, Patriot and Southland Conference — will be determined next Saturday in the final week of regular season action.