In Minnesota, everyone’s aboard the Gophers boat 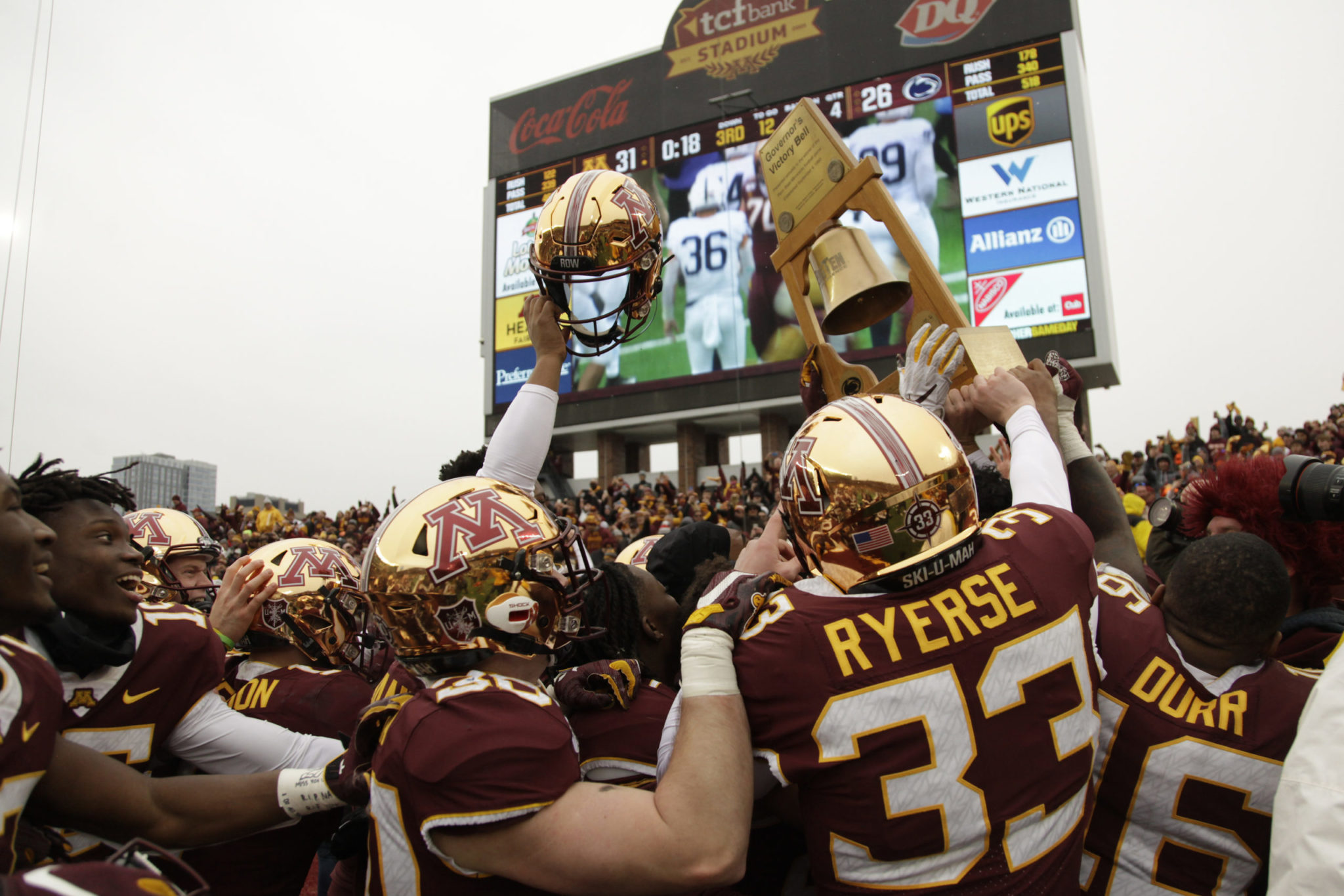 At 73, Allan Vergin has been waiting a long time for his Golden Gophers to make it to a meaningful bowl game. When Minnesota beat Penn State earlier this month — giving the Gophers their first 9-0 record since 1904 — tears rolled down Vergin’s face as he told a friend: “I’m smelling roses!”

While last week’s tight loss to Iowa took a tiny bit of bloom off the team’s Rose Bowl hopes, Vergin and the rest of a long-beleaguered fan base are enjoying a red-hot revival of their 11th-ranked Gophers under coach P.J. Fleck.

“I think this coach has brought a group of guys together as a team that’s stronger than I’ve ever seen,” Vergin said, choking up again as he recounted the high of the Penn State win, which came at home. “These are a bunch of kids that love each other. And I think they love the coach and the coach loves them, and that makes it even more emotional.”

Minnesota’s stirring run has some wondering if the Gophers could be in the mix for the College Football Playoff, which ranks them at No. 10. The Gophers would need to win the rest of their games — including an expected Big Ten championship game against No. 2 Ohio State — to have any chance to make the CFP field of four. A trip to the Rose Bowl would be the next best thing.


Fans were euphoric after the Gophers beat Penn State 31-26 in Minnesota’s first win over a top-five team in 20 years, rushing the field in a blissful sea of maroon. One fan took a rally towel to place at her father’s gravesite after the win. Online traffic on a fan website doubled, online sales of Gophers merchandise picked up and fans started booking hotel rooms in Pasadena (just in case) and planning trips to the Big Ten title game in Indianapolis next month.

“Gopher fans have gone through the apathy phase before and right now it’s a complete polar opposite,” said Nadine Babu, co-owner of GopherHole.com, a website for fans. Despite Minnesota’s 23-19 loss to Iowa, she said, Fleck has changed fans’ mindset to believe in winning.

“People are just coming out of the woodwork and rowing the boat,” Babu said.

The Gophers have a one-game lead over Wisconsin in the Big Ten West and control their own destiny, with games Saturday at Northwestern and Nov. 30 at home against the rival Badgers.

Many bowl projections put the Gophers in the Rose Bowl if they win the West, and plenty of fans are daring to dream of returning for the first time since 1962.

Denny Schulstad, a senior in high school at the time, didn’t attend that one. He thought he would have another chance once he went to Minnesota. Instead, it’s been more than 50 years of mediocrity, interspersed with the occasional trip to also-ran bowls. The 75-year-old Schulstad has been a super fan through it all (Goldy Gopher attended his 50th wedding anniversary this year, and he has a five-foot tall statue of the mascot in his yard). This year, he said, has been a marvelous ride.

“The stars have lined up just right,” he said.

Aaron Richards, a 36-year-old fan who grew up watching the Gophers with his family, said this is the season he has waited for.


“For years, all I have wanted is for Minnesota to be relevant. I have wanted to go into a season assuming we would make a bowl — thinking we have a chance to pull off an upset and thinking there’s no game on our schedule that is an automatic loss. It has been a long time since we have been able to say that,” he said.

“This is a magical season,” Richards added. “I hope that this is the new narrative.”

Fleck is getting much of the credit.

Plucked from Western Michigan after four years capped by a 13-1 season in 2016, Fleck brought his “Row the Boat” mantra and rah-rah attitude to Minneapolis, where some fans rolled their eyes as he went 5-7 and 7-6 his first two seasons. An 8-0 start this year made critics harder to find, and Minnesota just a couple weeks ago gave him a seven-year, $33.25 million extension.

Wendy Bauman, a senior, said the excitement on campus has been visible.

“It’s cool to see how the culture has changed on campus to being a place that wasn’t completely supportive of the football program to now, this year especially … everyone is so pumped and excited to see what is going to happen with the rest of the season,” Bauman said.

Fleck has been talking about creating “some type of dynasty … some type of cultural sustainability,” and there’s some truth in that. This is, after all, a market where pigskin futility is a familiar rite of fall and winter. The NFL’s Vikings, as anyone around here knows, have made it to four Super Bowls and won none.

Mark Rosen, a longtime TV sports anchor in the Twin Cities, noted the Penn State victory wasn’t assured until the Gophers intercepted a pass in their end zone.

“Minnesota fans are going, ‘Here’s Charlie Brown and Lucy. Here we go again, she’s going to pull the football away,’” he said. Like Fleck, he said the key now is delivering more seasons like this one.

“The story hasn’t been completed yet,” he said.