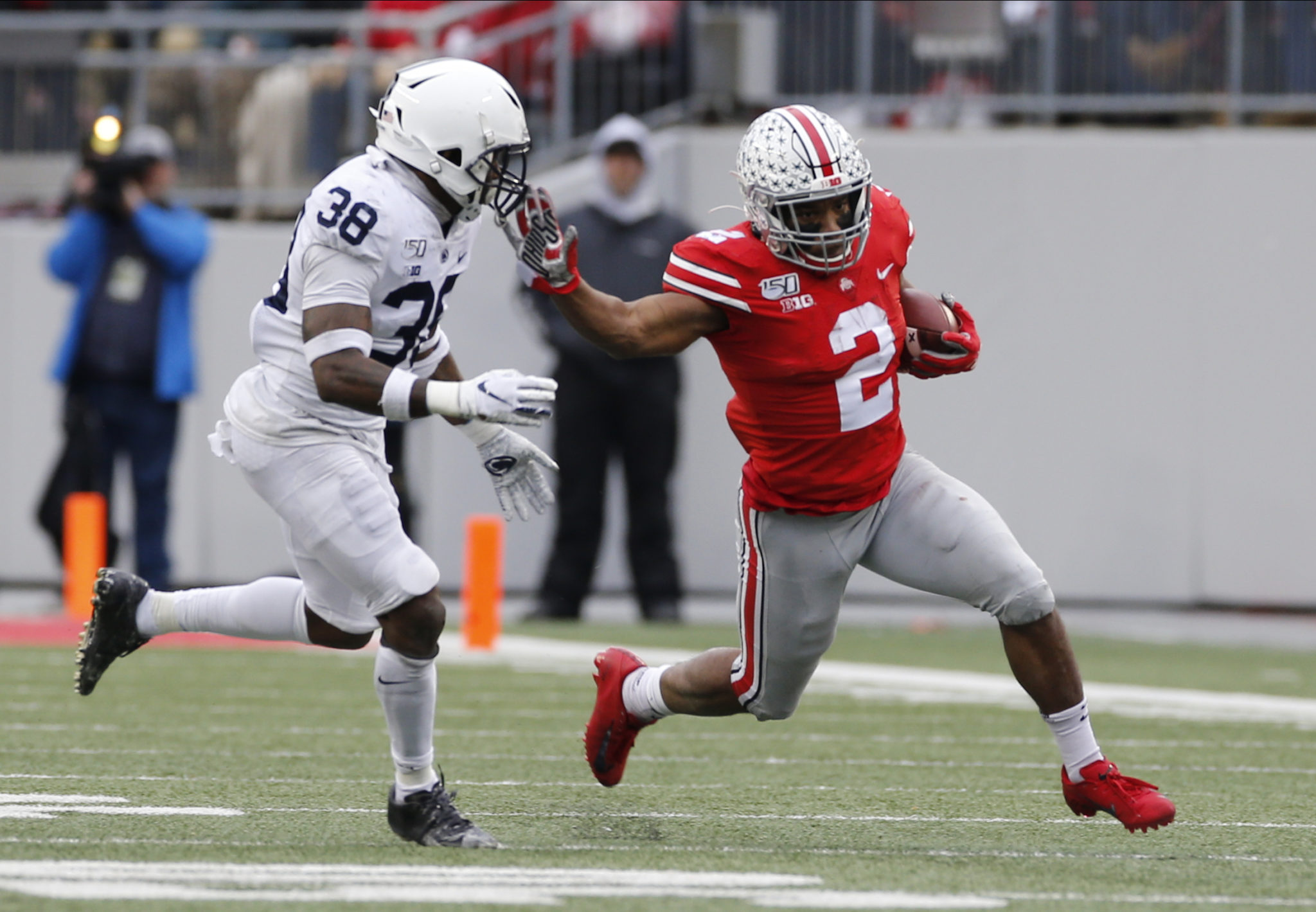 After cruising through the first 10 games against teams that didn’t put up much a fight, No. 2 Ohio State found itself in a slugfest with No. 9 Penn State.

The Buckeyes responded, winning with defense.

Justin Hillard intercepted Penn State backup Will Levis’ pass and the Buckeyes stopped the Nittany Lions on fourth down on two late drives to seal a 28-17 victory and lock up the Big Ten East title.


Ohio State held on after Penn State (9-2, 7-2) took advantage of two second-half turnovers to climb back in the game after trailing 21-0. This was a far different scenario for Ohio State, which hadn’t yet had to play hard into the second half.

“We talked about going into a big heavyweight match, and you have to take shots,” Ohio State coach Ryan Day said. “One of the things about playing in a game like this is you have to be willing to take punches and you have to not flinch when it happens. That was a great example. That was the first time we really were taking shots there.”

The Buckeyes were clinging to a 21-17 lead early in the fourth quarter when Fields threw a 28-yard touchdown pass to Chris Olave to create some breathing room.

Ohio State, with Chase Young back from a two-game suspension, then got the interception from Hillard before shutting down two late Penn State drives on fourth down, aided by deafening crowd noise. The last drive included back-to-back sacks of backup quarterback Will Levis by Young and linebacker Baron Browning.

Fields fumbled away the ball twice, once as he was crossing the goal line for what would have been a touchdown. But he got critical yards on the ground, rushing for 68 yards on 21 carries and threw beautiful second half touchdown passes to K.J. Hill and Olave.


And he got knocked around plenty, and at one point late in the game was slow to get up after being sacked but stayed in the game.

Young was back in action after sitting out two games as a penalty for breaking the rules by accepting a personal loan. And he was a force, picking up nine tackles, including three sacks. He has 16 1/2 for the season, the most ever by a Buckeye.

Freshman QB Levis finished up Penn State’s first scoring drive in the third quarter — capped by an 18-yard touchdown run by Journey Brown — after Sean Clifford left the game with an injury. Coach James Franklin said Clifford was available to come back in but wasn’t 100% so he stayed with Levis, who scored on a 1-yard run in the third quarter.

“I was a little nervous the first couple plays, but then it all went away, and I started having fun and doing my thing,” Levis said.

Coincidentally, Levis signed with Penn State after Fields withdrew his commitment to Franklin and chose Georgia in 2018. Fields transferred to Ohio State in January.

Penn State: Statistically, the Nittany Lions were beaten soundly but managed to hang around until late. Journey Brown ran the ball 11 times for 64 yards.

“No one flinched,” Penn State safety Garrett Taylor said. “We came out and fought hard.”

Ohio State: The Buckeyes outgained the Nittany Lions 417-227 but were stricken by uncharacteristic turnovers. Now it’s on to Ann Arbor for the rivalry game against No. 12 Michigan.

“It’s good to have a full game under your belt, especially going into next week,” linebacker Pete Werner said.

Buckeyes should stay put. Nittany Lions could drop but not much after playing Ohio State tough.

Ohio State: Winds up the regular season next Saturday with rivalry game against Michigan.