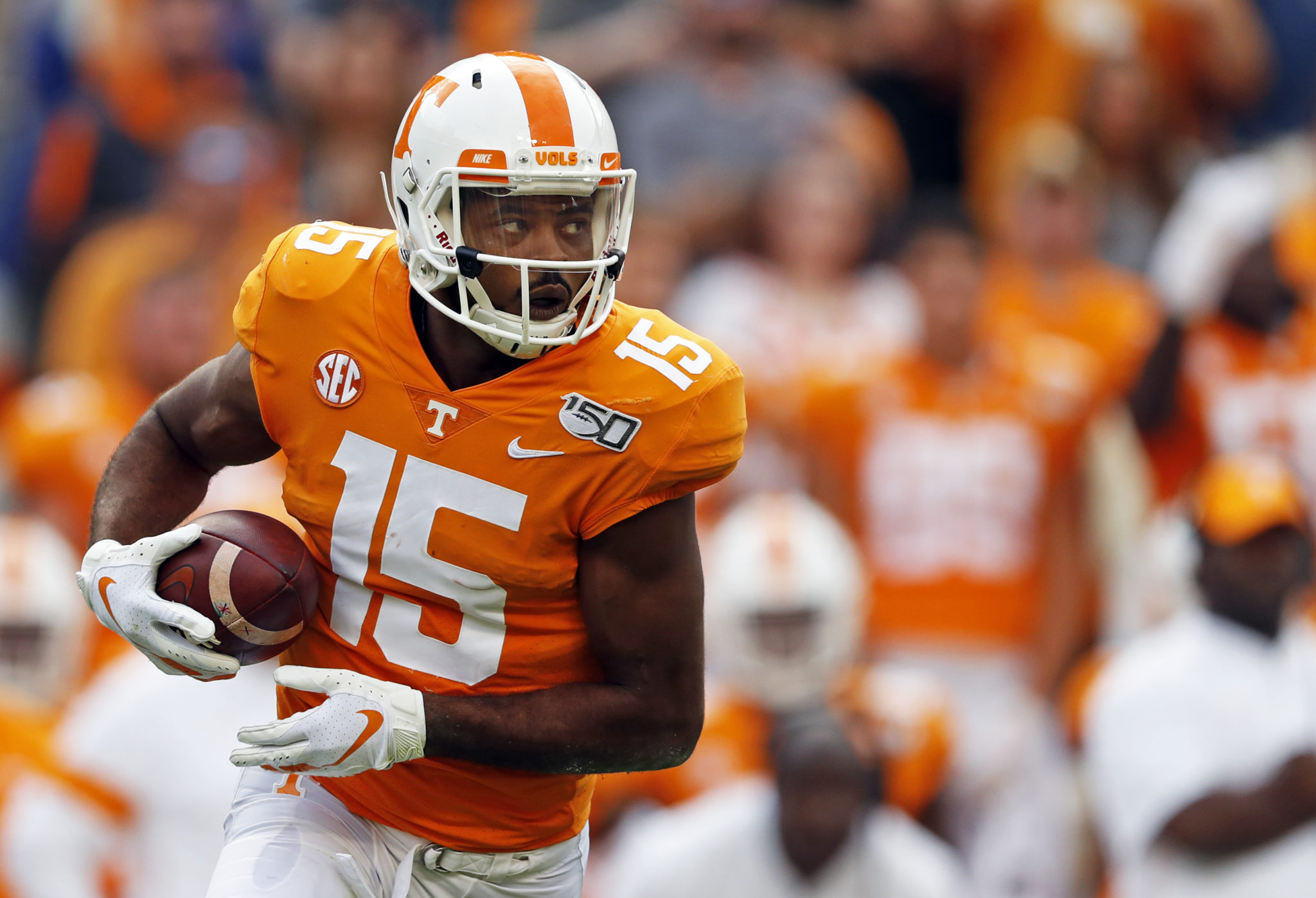 Tennessee wide receiver Jauan Jennings has orchestrated a personal turnaround over the last two years, becoming one of the Volunteers’ most popular players after getting himself kicked off the team.

Jennings was dismissed from Tennessee’s football program late in the 2017 season after he criticized members of the former coaching staff in a profanity-laced video posted on Instagram and later deleted. Two years later, Jennings has become one of the Volunteers’ leaders under Jeremy Pruitt’s staff.

“Being able to have that second chance, you kind of realize this game can be taken away from you in the blink of an eye,” Jennings said.


This year, Jennings has caught 42 passes for 652 yards and seven touchdowns. He also is on track to graduate in December. He credits the arrival of Pruitt for helping him revive his career.

Pruitt was hired in December 2017 and reinstated Jennings the following spring — though not everyone supported the decision.

Pruitt said Jennings’ reinstatement came with conditions, but the coach didn’t specify what they were.

“We set out some things there that we required him to do,” Pruitt said, “and he’s done everything that we’ve asked him to do.”

Jennings has rewarded the coach’s faith in him.

He wasn’t at full strength last year while recovering from a knee injury, but he’s been a major factor this season in helping Tennessee (3-5) rebound from a 1-4 start. Tennessee hosts UAB (6-1) on Saturday.

Jennings has developed into one of the Southeastern Conference’s toughest receivers.

He caught seven passes for a career-high 174 yards and two touchdowns last week in a 41-21 victory over South Carolina. He broke three tackles on a 48-yard touchdown and held on to the ball while getting hit at the end of a 19-yard score.

Pruitt said he also spoke to a number of Tennessee players before reinstating Jennings. Offensive lineman Trey Smith and linebacker Daniel Bituli were among those who wanted Jennings back on the team.

Bituli praises the passion Jennings brings to every practice.

“Just having that consistent attitude each and every day is great for the team and just motivates a lot of guys behind him,” the linebacker said.

Jennings signed with Tennessee as a quarterback but was moved to receiver early in his college career. Former Tennessee quarterback Joshua Dobbs notes that many players would pout at that point, but Jennings instead blossomed in his new role.

“He’s like (Randy) Mossing guys, owning the ball in the air,” said Dobbs, who’s now with the Jacksonville Jaguars. “Not because he was the most skilled at it — he had just been there for like two months — but because he was competitive and enjoyed competing, wanted the ball in his hands and wanted to make plays.”

Jennings said his competitiveness comes from growing up in a family of athletes.

Alexis Jennings said family members competed in cards, board games, bowling and fishing. Alexis said she and her dad also would play two-on-two basketball games against Jauan and Kendal.

“No one likes losing in any sport, and in our family if you lose a game, that person is going to brag and make jokes until you beat them,” Alexis Jennings said via email. “Jauan has always been a competitive person since we were younger. I think that because he was the shortest, it has always made him play anything with a chip on his shoulder.”

Jauan and Alexis Jennings are each listed as 6-foot-3 by their respective schools.

Jennings has been a fan favorite ever since he scored a go-ahead touchdown in a victory over Florida and caught a Hail Mary pass to beat Georgia three years ago.

He endears himself to teammates by also doing the little things.

“When he’s at receiver and we’re on the goal line, goal-line runs, he’s blocking the safety, the cornerback like out of the end zone and dumping him,” Dobbs said. “No one really sees that because you’re focused on the run, but he’s putting the DB in the locker room. He loves the game of football and that’s his mindset.”

Jennings is savoring his second chance and loving every moment of his final season in a Tennessee uniform.

“I’m from Tennessee, my family (members were) Tennessee fans growing up, Tennessee has always been instilled in the person I am today,” Jennings said. “I kind of take that with me when I go out and play football on the field. It just means everything to me. Hopefully one day we’ll see Tennessee on top.”