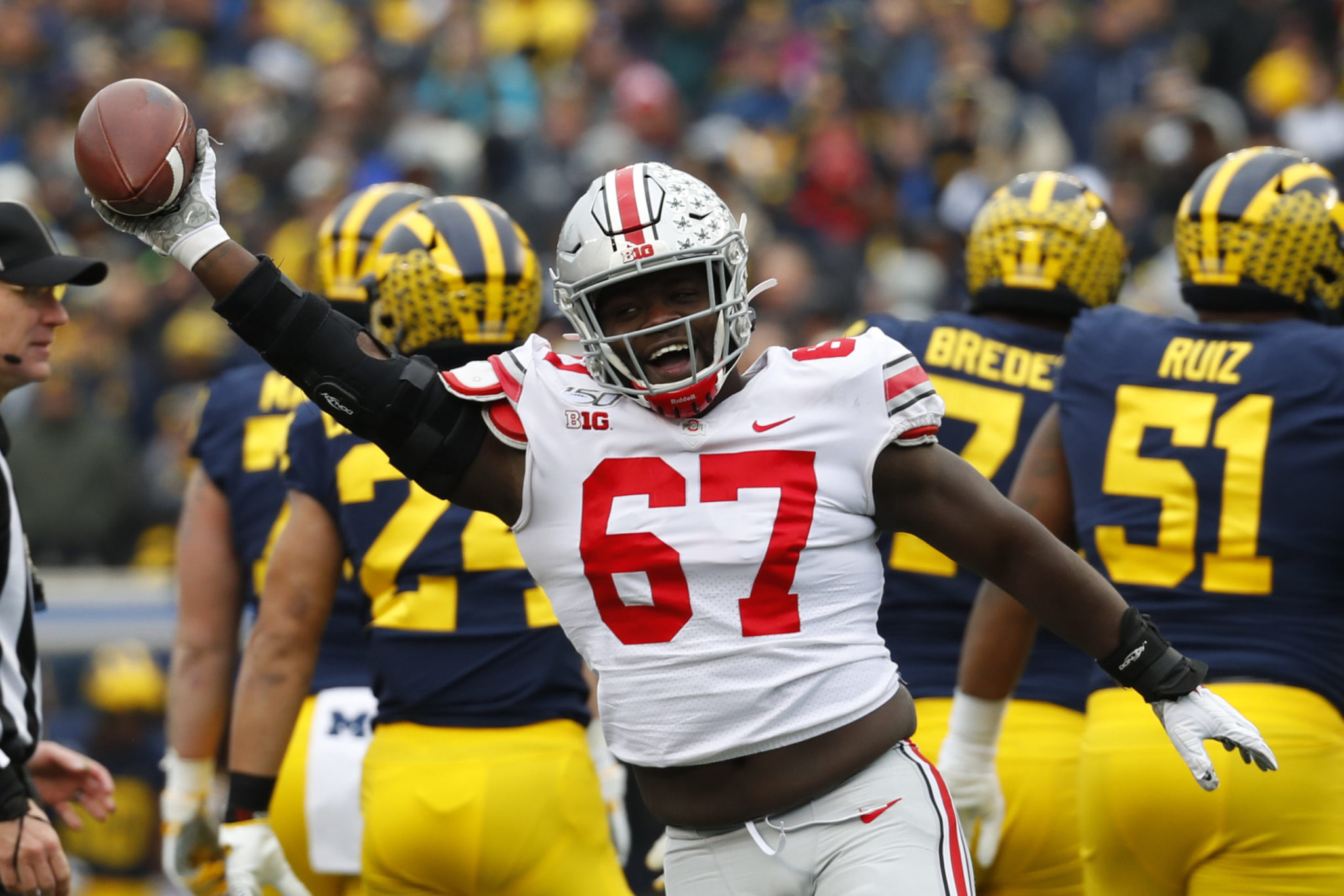 J.K. Dobbins ran for four touchdowns and Justin Fields threw four TD passes, providing plenty of firepower for No. 2 Ohio State to rout No. 10 Michigan 56-27 Saturday for a school-record eighth straight win in the series.

The Buckeyes (12-0, 9-0 Big Ten, No. 1 CFP) will head to the Big Ten championship game with a spot in the College Football Playoff in sight against either No. 9 Minnesota or No. 13 Wisconsin next Saturday.

The Wolverines (9-3, 6-3, No. 13 CFP) will have to settle for a second- or third-tier bowl game after coach Jim Harbaugh fell to 0-5 in the rivalry, and the Wolverines lost to Ohio State for the 15th time in 16 years.

Michigan got off to a strong start, driving 75 yards on the opening drive and scoring on Giles Jackson’s 22-yard run.


The Wolverines, though, followed that up with the first of too many mistakes that doomed their chances of pulling off an upset as a heavy underdog. Quinn Nordin missed the extra point and less than a few minutes later, the Buckeyes took the lead for good.

Dobbins, who ran 211 yards on 31 carries, scored to put Ohio State ahead 7-6 midway through the first quarter.

Fields, who was 14 of 25 for 302 yards, connected on a 57-yard touchdown pass to Chris Olave late in the first quarter.

Michigan answered with Shea Patterson’s 25-yard TD pass to Donovan Peoples-Jones to pull within a point later in the opening quarter and couldn’t get closer.

The Buckeyes turned the game into a rout by outscoring Michigan 28-3 to earn a 42-16 cushion late in the third quarter when only the final score was in doubt.

During the pivotal surge, Patterson lost a fumble on an accurate, shotgun snap from the Ohio State 12 trailing by eight points midway through the second quarter.

Hassan Haskins had 78 yards rushing and ran for a TD and a 2-point conversion early in the fourth to cut Michigan’s deficit to 15 points.

Fields and Dobbins added late TDs, giving Ohio State 56 points a year after it scored 62 in a win over the Wolverines.

Ohio State: The Buckeyes’ defense had issues for the first time this season, allowing a season-high 396 yards. Star defensive Chase Young also had a quiet day, but the Buckeyes played better in the second half than first and the offense did the rest.

Michigan: The Wolverines must figure out how to get better defensively to have any chance of making the rivalry competitive.

Ohio State could become the top-ranked team in The Associated Press poll after becoming No. 1 in CFP rankings earlier in the week. Michigan will fall back in the poll.

Ohio State: The Buckeyes beat Wisconsin in the regular season but did not play Minnesota.

Michigan: Waits for its bowl bid.