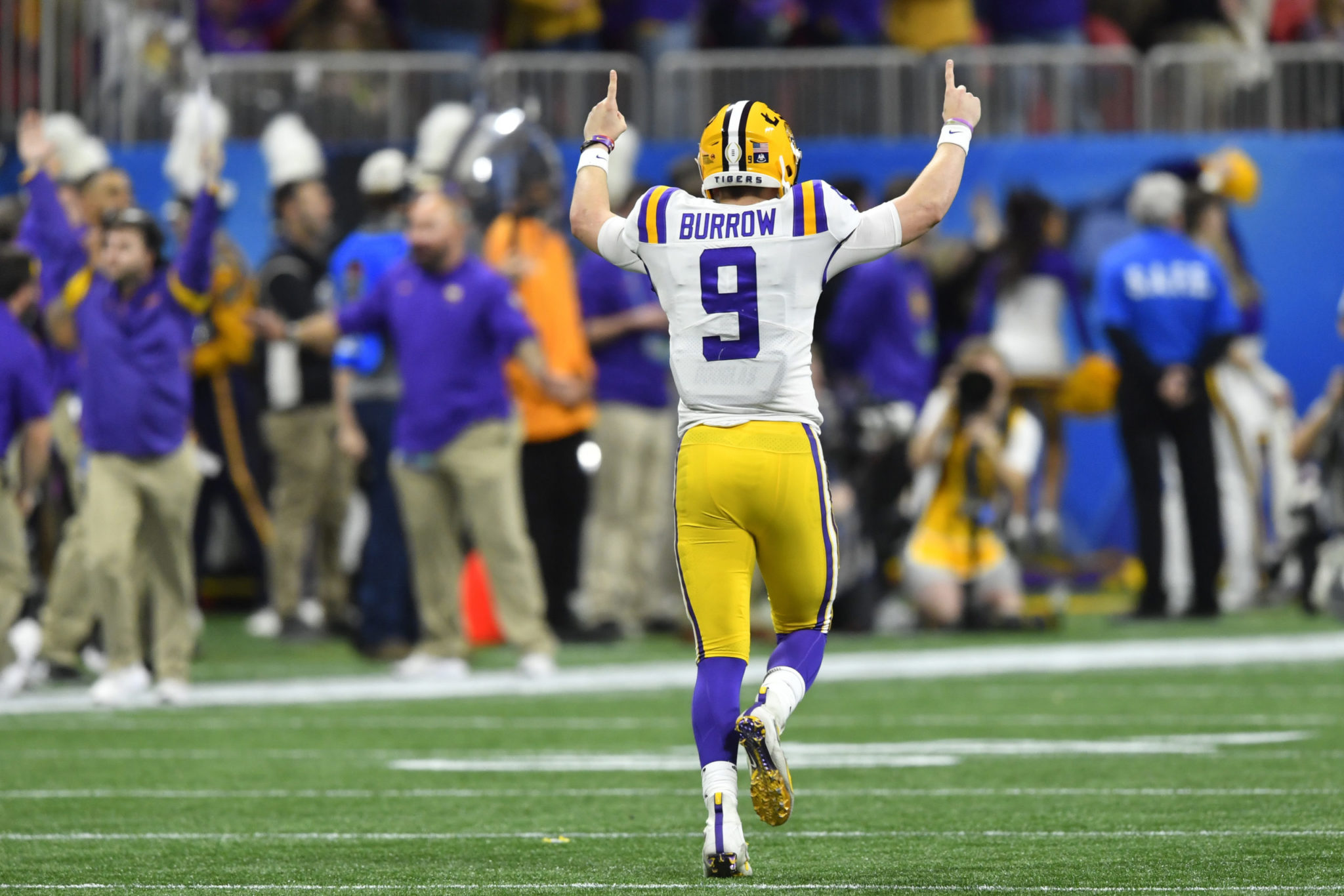 Joe Burrow and the LSU Tigers turned in a first half for the ages, a breathtaking offensive display even as their coordinator grieved a horrific tragedy from his box high above the field.

This team from the bayou is truly something special.

With one more victory, it will be a national champion.

In his first game as a Heisman Trophy winner, Burrow threw for seven touchdowns and 493 yards as No. 1 LSU romped to a stunning 63-28 victory over No. 4 Oklahoma in the Peach Bowl semifinal game Saturday.


The Tigers (14-0) are headed to the title game against either No. 2 Ohio State or No. 3 Clemson clicking on all cylinders, having dismantled the Sooners (12-2) with a 30-minute outburst that will long be remembered in Cajun country.

“We go into every game thinking nobody can stop us,” Burrow said.

Burrow tied the record for any college bowl game with his seven TD passes — which all came before the bands hit the field for the halftime show at Mercedes-Benz Stadium. Justin Jefferson was on the receiving end for four of those scoring plays, also tying a bowl record.

As if that wasn’t enough, Burrow scored an eighth TD himself on a 3-yard run in the third quarter, thoroughly dominating his expected duel with Oklahoma quarterback Jalen Hurts, the Heisman runner-up.

Yet, the postgame celebration was weighed down by heavy hearts.

LSU offensive coordinator Steve Ensminger learned shortly before kickoff that his daughter-in-law, broadcaster Carley McCord, was among five people killed in a plane crash in Louisiana. The small plane went down shortly after takeoff for what was supposed to be a flight to Atlanta for the game.


Head coach Ed Orgeron delivered the news to Ensminger, who was seen with tears running down his cheeks but stuck to the task at hand.

“Coach, we’re going to get through this,” Emsminger told his boss.

Then the coordinator headed to his usual spot in the box, calling plays alongside passing game coordinator Joe Brady.

It was a brilliant, poignant performance in the face of such grief. The players didn’t learn until afterward what Ensminger was going through.

“I can’t think of what he was able to do today with the circumstances,” Brady said. “It speaks to the type of man he is.”

LSU needed only three plays to race 42 yards for its first score — a perfectly thrown ball over Jefferson’s shoulder for a 19-yard TD less than 3 minutes into the game.

Oklahoma briefly put up a fight. Hurts’ 51-yard pass to CeeDee Lamb set up a 3-yard touchdown run by Kennedy Brooks that tied the score at 7.

After that, the rout was on.

The Tigers’ potent spread offense made this one look much like the Harlem Globetrotters carving up the Washington Generals, only it was the Sooners playing the hapless victim.

Jefferson hauled in a 35-yard pass for touchdown No. 2. Then a 42-yarder for No. 3. And, finally, a 30-yard scoring strike that left him counting off four fingers for the crowd — all before the midway point of the second quarter.

Terrace Marshall Jr. contributed to the onslaught with TD catches of 8 and 2 yards. Tight end Thaddeus Moss — the son of NFL Hall of Fame receiver Randy Moss — made his daddy proud by getting free behind the secondary, hauling in a pass and shoving off a fast-closing defender to complete the 62-yard scoring play.

“One team, one heartbeat,” Orgeron said.

It was a miserable finale for Hurts, who closed out a nomadic college career that began with him leading Alabama to a pair of national championship games before losing his starting job to Tua Tagovailoa. After graduating, Hurts transferred to Oklahoma for a one-and-done season that produced some dazzling numbers but ended short of the ultimate goal.


Running for his life most of the game, Hurts was largely stymied on the ground and through the air. He ran for a pair of touchdowns but gained just 43 yards with his legs. He was held to 15 of 31 for 217 yards passing, giving up a brilliant, leaping interception to Kary Vincent Jr. that quickly brought the LSU offense back on the field as the Tigers were blowing the game open.

“We needed to take advantage of every opportunity we had against a team like this,” Hurts said. “We failed to do that.”

Oklahoma defensive back Brendan Radley-Hiles was ejected early in the second quarter for a brutal hit on LSU’s Clyde Edwards-Helaire.

With Burrow scrambling toward the sideline, Radley-Hiles delivered the blindside shot to Edwards-Helaire coming out of the backfield.

The officials did not throw a flag, but a video review showed that Radley-Hiles leaped into the defenseless player with a shoulder to the helmet.

Three plays later, Burrow went deep to Jefferson for a TD that extended LSU’s lead to 28-7.

Oklahoma: Playing for the first time in a city where the Braves have become notorious for their flops in the Major League Baseball playoffs, the Sooners turned in a familiar performance. They have made the College Football Playoff four times in the six-year history of the format, but have yet to win a game. That could affect the way the selection committee views the Sooners the next time they’re in the mix — or any other Big 12 school, for that matter.

LSU: While this game will be remembered for the dynamic offensive showing, the Tigers’ defense kept up its encouraging turnaround over the latter part of the season. They held Oklahoma to 322 yards — far below its 554.2-yard average coming into the game, which ranked second nationally behind LSU. The front line kept the heat on Hurts, who was sacked twice and often wound up on his backside when he got the ball away.

Oklahoma: Hurts’ departure leaves a big hole to fill at quarterback, but freshman Spencer Rattler was one of the nation’s top prospects coming out of high school. He played in three games this season, including a mop-up role in the closing minutes of the Peach Bowl. Rattler will likely be leading the offense when the 2020 season begins Sept. 5 against Missouri State.

LSU: The Tigers will head back to Louisiana for a de facto home game at the Superdome on Jan. 13. That mirrors their last title run during the 2007 season, when they beat Ohio State 38-24 in New Orleans for the BCS championship. “Just getting there is not our final destination,” Orgeron said. “We’re looking to win it.”