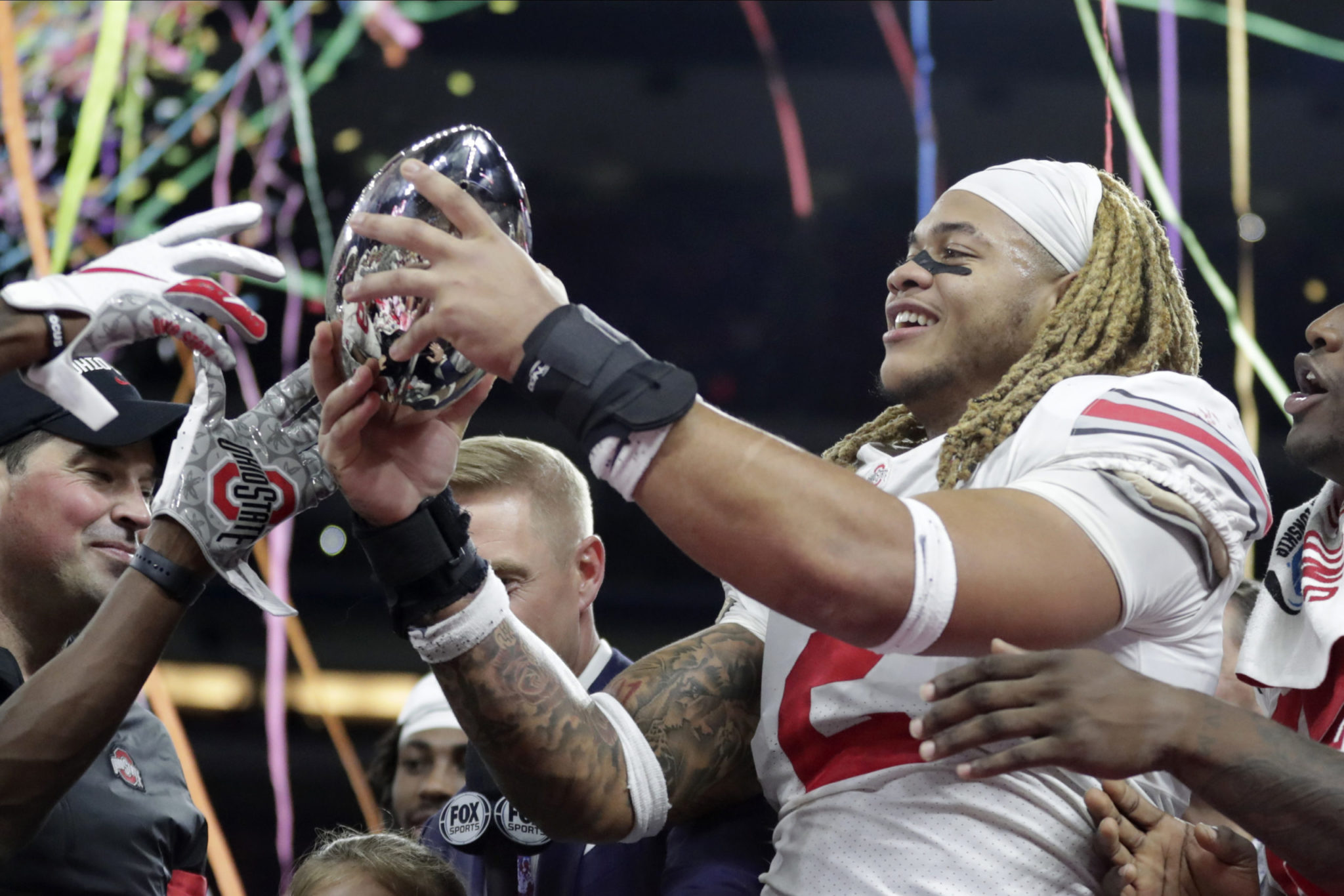 Clemson needed a little time to rev up on the heels of last year’s national championship before blasting through the final eight games of its schedule.

Ohio State started stomping opponents right away before having to rally in the Big Ten title game.

Two teams capable of dominating opponents are headed to the desert for the Dec. 28 Fiesta Bowl with a spot in the national championship game on the line.

“I don’t think the stage will be too big for either side,” Buckeyes coach Ryan Day said Sunday.


The Buckeyes (13-0) were No. 1 in the CFP rankings last week but were leapfrogged by LSU after struggling in the first half of the Big Ten championship game. Ohio State was No. 2 in Sunday’s final CFP rankings and in The Associated Press poll. Clemson (13-0) was No. 3 in both.

LSU faces No. 4 Oklahoma in the Peach Bowl in the other playoff semifinal. The national championship game is set for Jan. 13 in New Orleans.

The Fiesta Bowl has had high-level games in the past and this year figures to be no different, with Clemson and Ohio State both ranked among the national leaders on offense and defense.

Clemson has been a CFP regular. The Tigers have won two of the past three national titles under coach Dabo Swinney, are making their fifth straight playoff appearance and have an FBS-best 28-game winning streak.

Clemson beat Alabama in last year’s title game behind freshman quarterback Trevor Lawrence, but mostly flew under the radar early this season as Lawrence tried to find his footing.

Lawrence was limited to eight touchdown passes and had five interceptions in Clemson’s first five games, leading to some closer-than-expected games, including a one-point win over North Carolina.

Once Lawrence got rolling, so did the Tigers.

Getting better as the season wore on, Lawrence threw for 26 TDs the final eight games, including four in a blowout win over No. 22 Virginia in the ACC title game. He threw for for 3,172 yards and 34 TDs with eight interceptions and Travis Etienne balanced out the offense by rushing for 1,386 and 16 touchdowns.


Clemson won each of its final eight games by at least 35 points, including the 62-17 mauling of Virginia in the ACC title game for its fifth consecutive conference title.

The Tigers led the nation in total defense and scoring defense, were third in total offense and fourth in scoring.

“They’re the defending champs and they haven’t lost since,” Day said. “What they do on defense and what Brent Venables has done year in and year out, they’re the best defense in the country. If you look over the last five to 10 years, you can make a case that they are the best.”

The only nitpick: Clemson’s quality of competition.

Clemson faced little resistance in the ACC, its only game against a team in the final CFP rankings coming against Virginia in the conference title game. Playing in the Big Ten, Ohio State faced difficult games nearly every week, playing five teams that ended up in the final rankings.

“I don’t care what league you’re in, it’s incredibly difficult to win them all,” Swinney said.

The Buckeyes blasted teams in their first season under Day with the 1-2 Heisman Trophy-contending punch of Justin Fields and J.K. Dobbins

Dobbins was third in the FBS with 1,829 yards rushing and scored 20 touchdowns. He had 172 yards and a score against Wisconsin. Fields was third nationally with 40 TD passes while throwing for 2,953 yards with just one interception.

Ohio State also has one of the nation’s best defensive players in edge rusher Chase Young, who led the nation with a school-record 16 1/2 sacks despite sitting out two games due to an NCAA suspension.

The Buckeyes claimed an unprecedented third straight Big Ten championship and their first playoff trip in three years by pitching a second-half shutout in a 34-21 win over No. 10 Wisconsin on Saturday.

Ohio State led the FBS in scoring, was fifth in total offense, second in both total defense and scoring defense.

“They’ve been unbelievable, one of the most dominant teams, every week, all year long, and that’s an unbelievable accomplishment,” Swinney said.

The same could be said of Swinney’s team, which should make for another epic Fiesta Bowl.