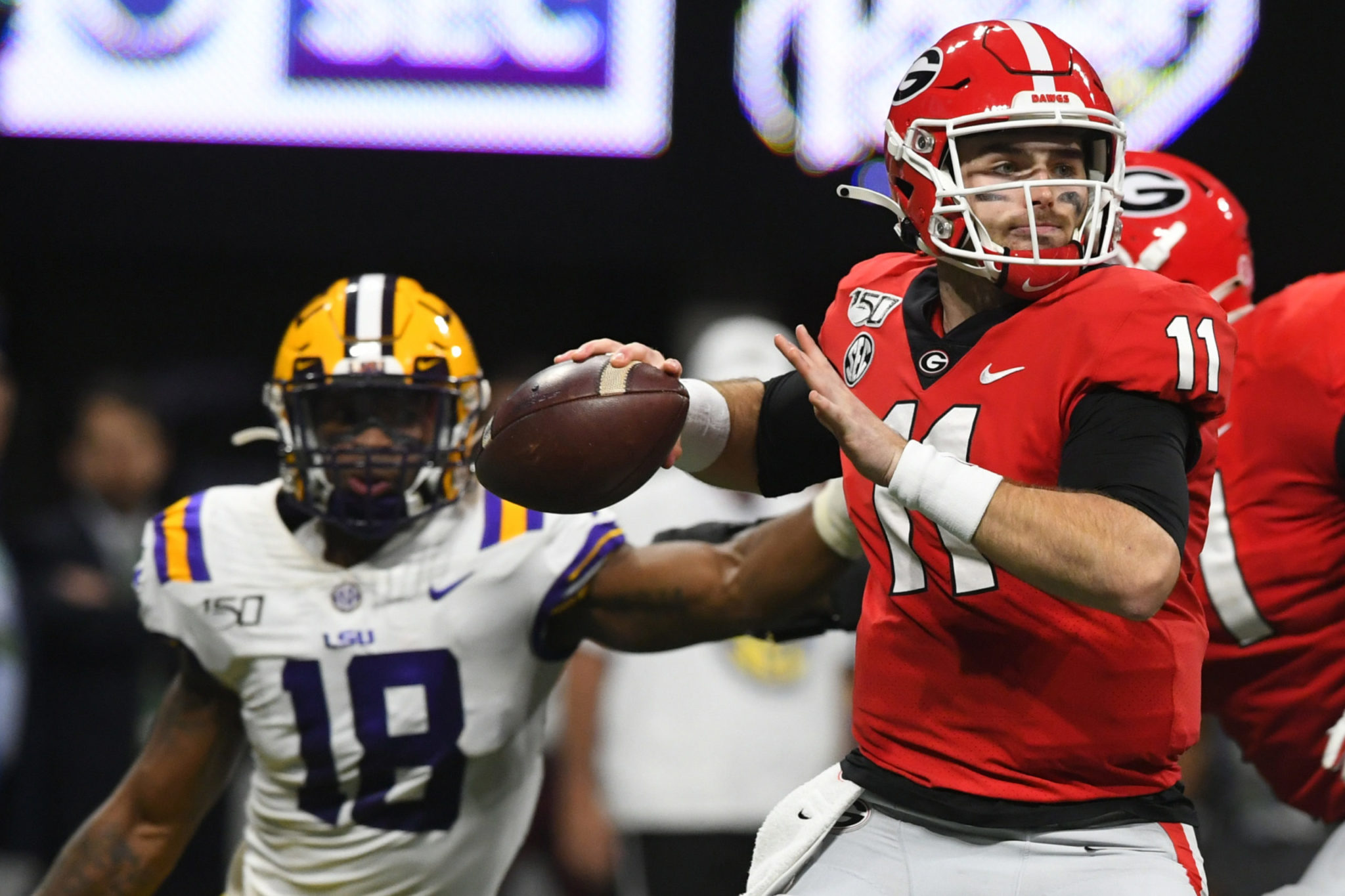 Joe Burrow collected a shiny award as the game’s MVP.

LSU’s fans had another trophy on their minds.

The coronation is likely complete.

Burrow turned in another dazzling performance on the big stage, leading No. 1 LSU to a spot in the College Football Playoff with a 37-10 rout of No. 4 Georgia in the Southeastern Conference championship game Saturday.

“Joe is the heartbeat of this team,” running back Clyde Edwards-Helaire said.


The Tigers, going for their first national title since 2007 season, will either return to Atlanta or head west to suburban Phoenix for a semifinal game on Dec. 28. They surely made a persuasive case to be the top overall seed when the four-team field. and pairings are announced Sunday.

Burrow was all over the stat sheet for LSU (13-0, No. 2 CFP). He threw for 349 yards and four touchdowns. He was the Tigers’ second-leading rusher with 41 yards on 11 carries, often leaving the Bulldogs grasping at air as he twirled this way and that. He even caught a pass on a ball that was batted down at the line and wound up his arms, taking off for a 16-yard gain.

‘”He’s a great athlete, man,” Georgia safety J.R. Reed said. “We had a lot of plays out there we were supposed to make, and he’d just squeeze out of it.”

The Heisman-worthy moment came late in the third quarter. With Georgia (11-2, No 4 CFP) bringing the heat, Burrow spun to his left to get away from lineman Travon Walker, whirled back to his right to send Walker sprawling to the turf, then delivered a pass on the run while sprinting toward the LSU sideline with another defender in hot pursuit.

Justin Jefferson hauled in the throw just beyond midfield and took off down to the Bulldogs 9 for a 71-yard play. Three plays later, Burrow delivered his third TD pass of the game, hooking up with Terrace Marshall Jr., on a 4-yard touchdown pass that essentially finished off the Bulldogs.

“It was all improvised,” Burrow said. “Justin ran a 6-yard hitch route and saw me scrambling and took off deep. We got a great feel for each other. I knew exactly where he was going to be when I got out of there.”

Burrow wasn’t done. Derek Stingley’s second pick of Jake Fromm turned the ball back over to the prolific LSU offense at the 13, and Burrow wasted no time finding Jefferson for an 8-yard TD in the waning seconds of the third quarter to send many in the predominantly Georgia crowd heading for the exits.


LSU left no doubt it is the king of the mighty SEC, completing its run through a gauntlet of the league’s top teams. The Tigers had already knocked off Alabama, Florida and Auburn. Now, they can add the Bulldogs to the list, ensuring the SEC will only get one team in the national playoff.

LSU came into the game as the second-highest scoring team in the country behind Ohio State. They figured to have a tougher time against Georgia’s stellar defense, ranked No. 2 in points allowed. but Burrow kept the Bulldogs on their heels the entire game.

It was by far the most points Georgia has given up their season. Until Saturday, they held every opponent under 20 except South Carolina, which stunned the Bulldogs in double overtime nearly two months ago.

There was no such drama in this one.

Just total domination by the Tigers.

It was a painful loss — literally — for the Bulldogs, who were making their third straight appearance in the SEC title game. Two players were carted off the field with apparently major injuries. Another player wobbled off with a concussion after being leveled on a kickoff. Fromm twisted an ankle and had to go to the medical tent to get taped up, though he missed only one play.

Not that it mattered.

Fromm, who guided Georgia to the cusp of the national title two years ago as a freshman, was 20 of 42 for 225 yards with those two interceptions. He didn’t get much help from his teammates: Tyler Simmons dropped a deep ball on the very first possession, and Matt Landers couldn’t hang on to a throw in the end zone.

“That is a really good football team,” coach Kirby Smart said. “We were going to have to make explosive plays. We were unable to do that.”

Receiver Dominick Blaylock crumpled to the turf after going up for a catch in the first quarter. He was carted to the locker room with a left knee injury.

Outside linebacker Walter Grant suffered a concussion in the third quarter from a special teams hit. LSU’s Tory Carter was ejected for targeting.

Star running back D’Andre Swift clearly wasn’t at full strength, either, after going out of the regular-season finale against Georgia Tech with should injury. He had just two carries for 13 yards.

LSU: The Tigers could certainly take pride in putting up 481 yards on a defense of Georgia’s caliber, but the most encouraging aspect of this game was another strong performance from LSU’s defense. Maligned much of the season, they followed up a 50-7 rout of Texas A&M in the regular-season finale with another championship-worthy showing against the Bulldogs, who were held to 286 yards.

Georgia: Fromm came into the season projected as a high NFL draft pick who would likely go pro after his junior season. Now, it’s not a reach to say he might be better off returning for his senior season to try to boost his stock. He has now failed to complete even half his passes in five straight games.

LSU: Makes its first appearance in the College Football Playoff, which began in 2014. The Tigers last played for a national title during the 2011 season, when they won 13 straight games before a dismal 21-0 loss to Alabama in the BCS championship game.

Georgia: Appears likely to make its second straight appearance in the Sugar Bowl against Baylor, loser of the Big 12 championship game.