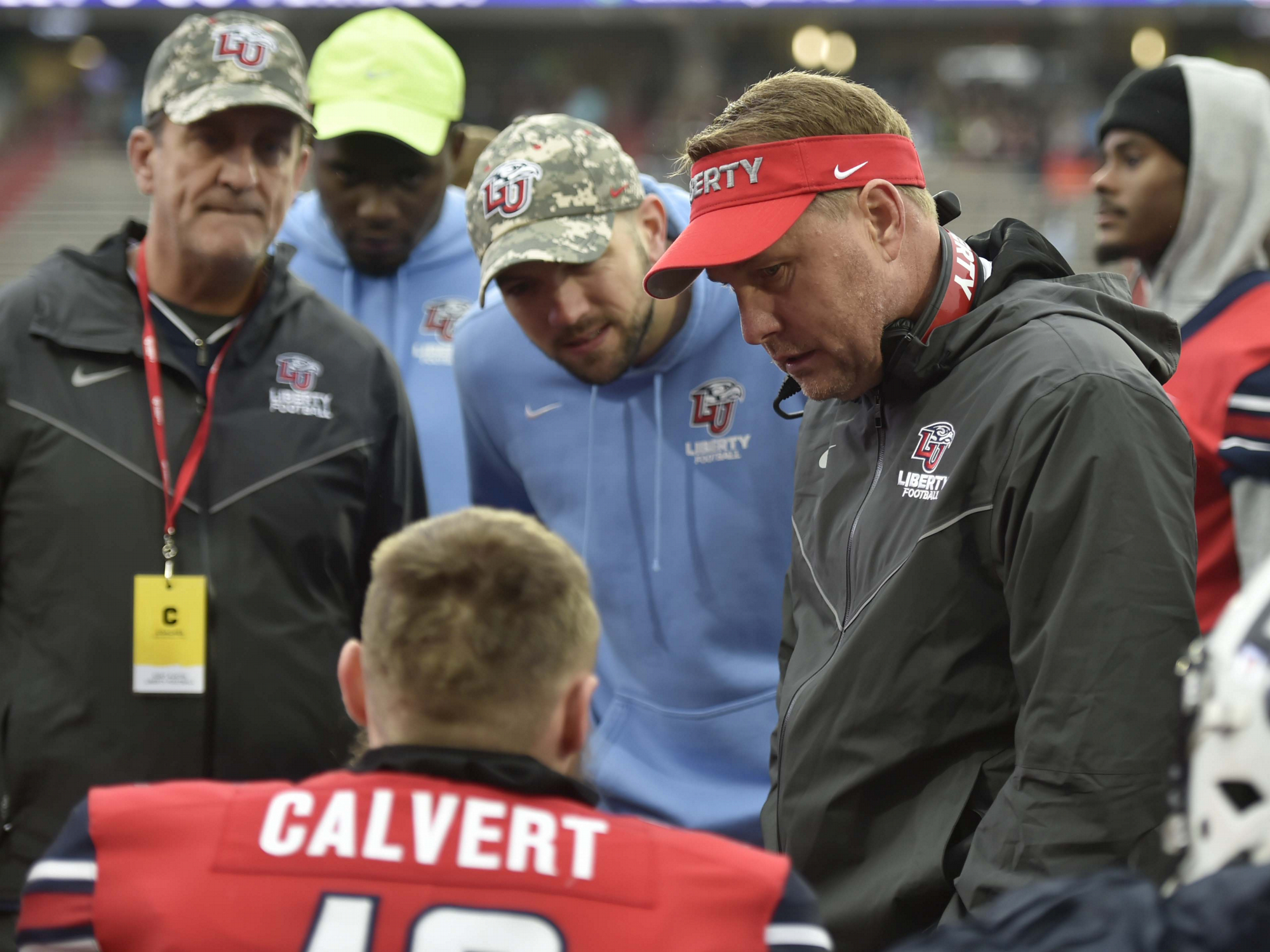 Liberty coach Hugh Freeze went from coaching from a hospital bed at the start of the season to standing with a bowl championship trophy.

Frankie Hickson picked up 120 yards rushing on 22 carries, Stephen Calvert went 16 of 35 passing for 270 yards and two touchdowns, and Liberty beat Georgia Southern 23-16 in the Cure Bowl on Saturday.

Freeze began his first season coaching at the school from a hospital bed in the press box for the season opener against Syracuse following back surgery two weeks earlier on Aug. 16.

“I actually look back on that and think I was stupid for trying it,” Freeze said. “I wasn’t very much help that night. I was pretty worthless. I didn’t add much value to it.”


Freeze missed 24 practices, coached another game from the press box in a medical chair, and four more on an elevated platform on the sidelines before returning to a traditional standing position on Oct. 19.

“I do think the kids saw it as, look, this guys is nuts or he’s really committed to us, probably a little of both,” Freeze said. “And they know I’ll never quit. I’m just thankful right now that I’m sitting in this spot.”

Liberty (8-5) joined Georgia Southern and Appalachian State as the only teams to move from FCS to FBS and win a bowl game in its first season of eligibility.

“We accomplished our goal.” Calvert said.

Hickson became the first Liberty running back since Rashad Jennings (2006-08) to have back to back seasons of 1,000-yards rushing.

“Got beat,” Georgia Southern coach Chad Lunsford said. “They wanted it more than us and they got it.”

Calvert threw a 57-yard old touchdown pass to Johnny Huntley late in the first quarter and Joshua Mack scored on a three-run yard during the second as Liberty took a 16-7 halftime lead.

“They were flying to the football” Werts said. ”They shut us down.”

Antonio Gandy-Golden caught a 14-yard scoring strike from Calvert in the third. He had five receptions for 63 yards and set a school single-season record with 1,396 yards.

The Liberty defense limited Georgia Southern to three field goals in the second half.

Liberty: Earlier this month, Freeze signed a multiyear contract extension. The 50-year-old had been out of coaching for two years before accepting the job at Liberty. He resigned his position at Mississippi in July 2017 under a cloud of NCAA sanctions and questionable personal conduct.

Georgia Southern: Werts said “absolutely” that he will return for his senior season in 2020.

Werts had his school-record streak of 230 consecutive passes without an interception end when Javon Scruggs picked off his pass late in the second. The turnover resulted on a 46-yard field goal by Alex Probert.

Georgia Southern: Travels to Boise State to start the 2020 season on Sept. 5.