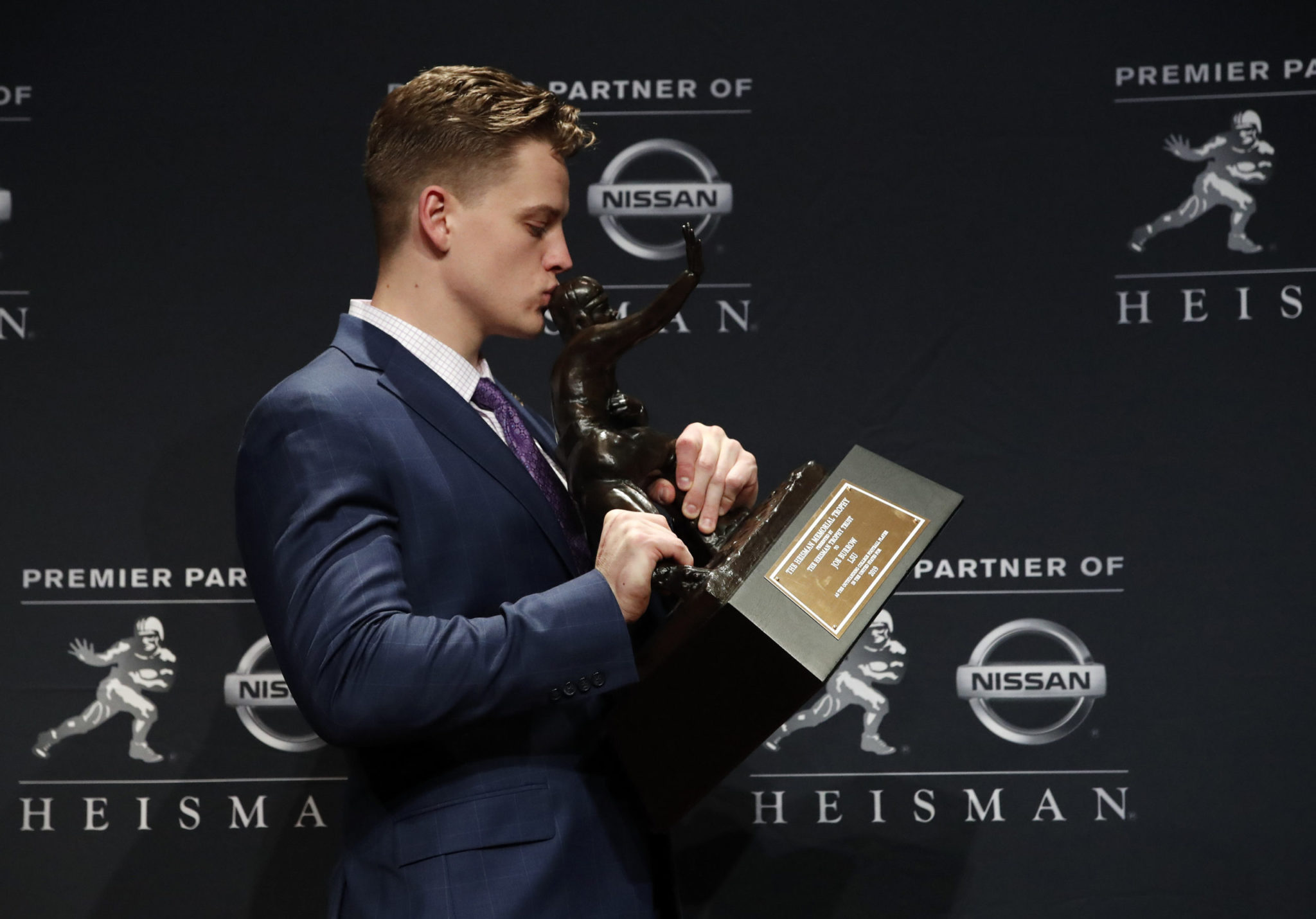 Born into a family of Cornhuskers and raised in the Buckeye state, Joe Burrow left his roots behind and became a Heisman Trophy winner at LSU.

The quarterback won the Heisman on Saturday night in a record-breaking landslide, becoming the first LSU player to bring college football’s most prestigious award back to Baton Rouge, Louisiana, in 60 years.

Burrow transferred last year to LSU from Ohio State, where he was a sparingly used reserve. After finishing strong for the Tigers in 2018, he broke out this season, setting a Southeastern Conference record with 48 touchdown passes and leading top-ranked LSU (13-0) to its first College Football Playoff appearance.

Burrow’s victory was a foregone conclusion, but after he was announced as the winner it still overwhelmed him.

“That’s the most I’ve cried in 23 years of living,” Burrow said later.

After hugging his parents and coaches, Burrow made his way to the stage inside the PlayStation Theater in Times Square. He started his acceptance speech, stopped and took 23 seconds to compose himself before rattling off the names of LSU’s other offensive players.

“All my teammates have supported me, welcomed me with open arms. Kid from Ohio, come down to the Bayou, and welcomed me as brothers,” Burrow said, with about two dozen former Heisman winners standing behind him on stage.

“What a special moment,” LSU coach Ed Orgeron said. “I thought Joe handled everything first class. It’s the first time I’ve seen him get that emotional.”

The Tigers will face No. 4 Oklahoma and Hurts on Dec. 28 at the Peach Bowl in Atlanta.

“I’m ready to get back to Baton Rouge and start practice on Monday,” Burrow said.


Burrow, a senior, blended perfectly with first-year LSU passing game coordinator Joe Brady and produced the most prolific offense in school history. Playing in a version of the offense Drew Brees runs for the New Orleans Saints, Burrow has shown accuracy and quick decision-making similar to his childhood idol. With at least one game left, Burrow has passed for 4,715 yards and is completing 77.9% percent of his passes, on pace to set an NCAA record.

The kid who grew up thinking he might play college basketball has blossomed into the possible first overall pick in April’s NFL draft, and LSU’s second Heisman winner.

Halfback Billy Cannon won the Heisman for LSU in 1959. The 60-year gap between Heisman victories for LSU is the largest for any school with multiple winners.

Burrow is the 17th quarterback to win the Heisman since 2000, and the third straight QB to win the award after transferring, joining Oklahoma’s Baker Mayfield (2017) and Kyler Murray (2018).

Burrow’s dad, Jimmy Burrow, was a longtime college football coach, who played at Nebraska. He spent the last 14 years of his career as defensive coordinator at the Ohio University in Athens before retiring to spend his weekends watching his son play.

“It’s been a dream season for him as well,” Burrow said.

Joe Burrow grew up in The Plains, Ohio. His older brothers both played at Nebraska.

His father’s old boss, Ohio coach Frank Solich, hoped the youngest Burrow boy would play for the Bobcats, but Joe took off in high school. Burrow was Mr. Football in Ohio in 2014 and signed with Ohio State the next year.

In Columbus, Ohio, Burrow joined an already loaded quarterback room with J.T. Barrett, Cardale Jones and Braxton Miller. Burrow redshirted as a freshman and played a little in 2016.

In 2017, he was competing with Dwayne Haskins to be Barrett’s backup and broke his hand in preseason practice. That opened the door for Haskins to position himself as the quarterback of the future for Ohio State.

After spring practice in 2018, having already graduated from Ohio State, Burrow decided to transfer. LSU wasn’t his first choice, but Orgeron recruited the quarterback hard.

“He gave me an opportunity when not a lot of people thought I was going to do anything,” Burrow said. “He trusted me with his program.”

“It’s been a long and winding (journey),” Burrow said, “and there’s still more chapters to be written.”