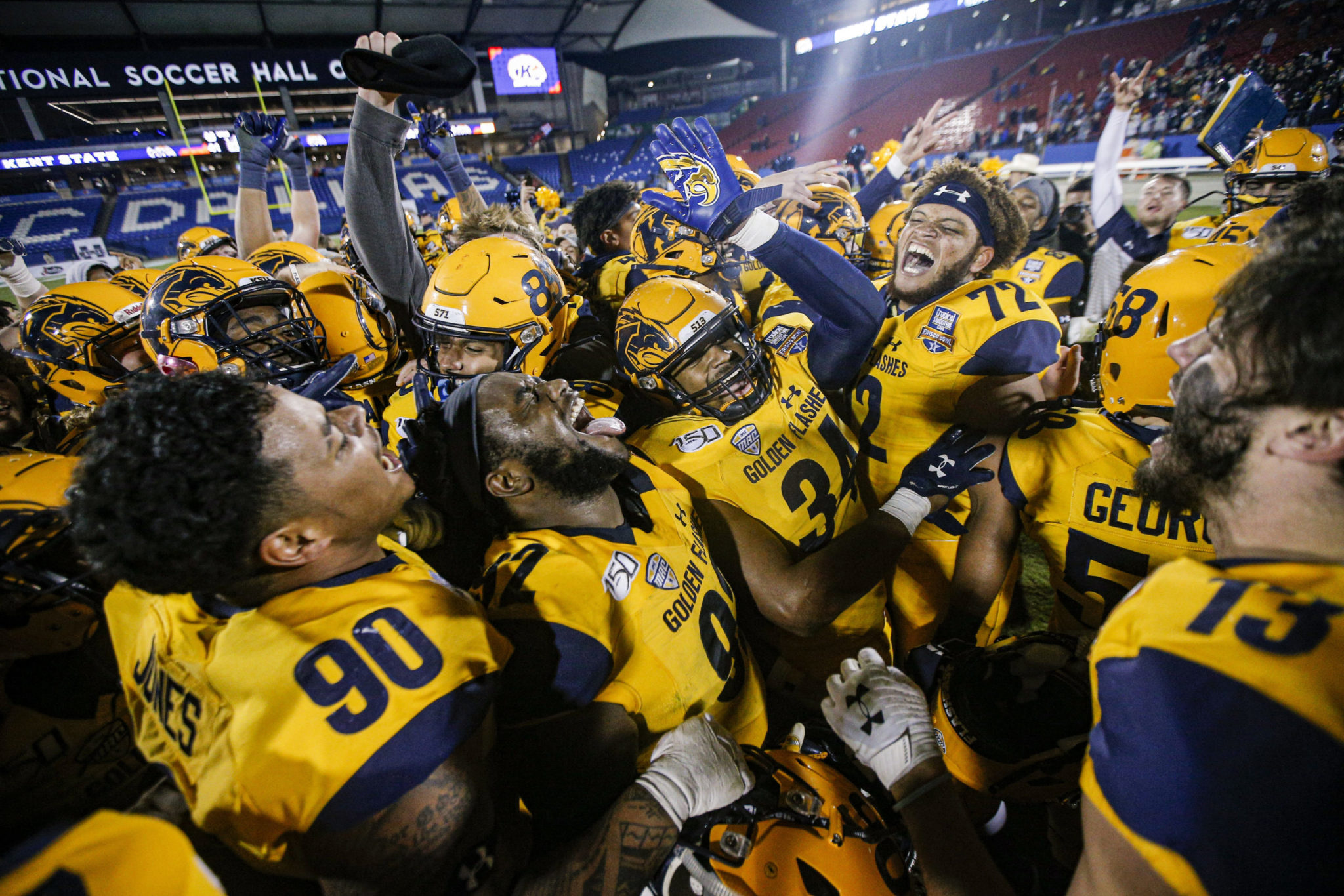 Kent State football players, as coach Sean Lewis said Thursday, haven’t been able to call themselves winners for seven years. On Friday night, the Golden Flashes not only became winners but also achieved something that no other team in school history could claim — a bowl victory.

Dustin Crum passed for 289 yards and two touchdowns and ran for a career-high 147 yards and the clinching score to help Kent State beat Utah State 51-41 in the Frisco Bowl.

“I’m just so happy for the university,” said Crum, who also was Kent State’s leading rusher during the season. “We weren’t supposed to be here, but here we are.”

Kent State (7-6) closed with four straight wins to finish with a winning record for the first time since 2012.


“I love these boys,” said second-year coach Lewis, whose first Kent State team finished 2-10. “Just tremendous resolve by them. It was a testament to their character.”

Crum threw a 78-yard touchdown pass to Isaiah McKoy down the right sideline on Kent State’s third play from scrimmage. Crum flipped a 1-yard scoring pass to Antwan Dixon with 9:36 to play to put the Golden Flashes ahead for good, then scored with 1:56 left on a fourth-and-1 run from the 4.

Jordan Love passed for 308 yards and three touchdowns, two of them to Siaosi Mariner, in his final game for Utah State (7-6). The junior announced last week that he’ll bypass his senior season to enter the NFL draft.


Deven Thompkins scored on a 57-yard run and a 17-yard reception for the Aggies.

“That was our goal, to get home and take that trophy with us, and it didn’t happen,” Utah State coach Gary Andersen said. “So, that’s extremely disappointing.”

“We played hard the entire game but couldn’t finish it,” Thompkins said.

Kent State cornerback Jamal Parker sat out the first half because of a targeting penalty in the second half of the season finale against Eastern Michigan. With Utah State executing a pooch kick trailing 44-41 with 3:06 to play, Parker not only fielded the kick at Kent State’s 41, he returned it 46 yards to Utah State’s 13 to set up Crum’s touchdown run.

LOVE BY THE NUMBERS

Jordan Love’s 333 yards of total offense and 30 completions pushed him past Chuckie Keeton in both categories to become the school leader with 9,003 yards and 293 completions. Love is second to Keeton in passing yardage and attempts.

Utah State: The first season of Andersen’s second stint as head coach resulted in the program’s eighth bowl game in nine seasons and the sixth winning season of the decade, the most since the 1970s (seven).

Kent State: The Golden Flashes’ previous bowl appearances were losses in the 1952 Refrigerator Bowl, the 1972 Tangerine Bowl and the 2012 team falling in the 2013 GoDaddy.com Bowl.

Utah State: The Aggies lose the No. 2 passer in program history in Love, top rusher Gerold Bright and leading receiver Mariner. Henry Colombi will begin spring practice as Love’s successor having seen more playing time as a freshman in 2018 than as a sophomore this season. The season will begin with a visit from Washington State and includes trips to Washington, BYU and Boise State.

Kent State: The Golden Flashes could again spend the conference season trying to recover from a rugged non-league schedule (visits to Penn State, Kentucky and Alabama). They could be dependent at least early on an offense that returns Crum and McKoy as top playmakers given their losses on the defensive front.