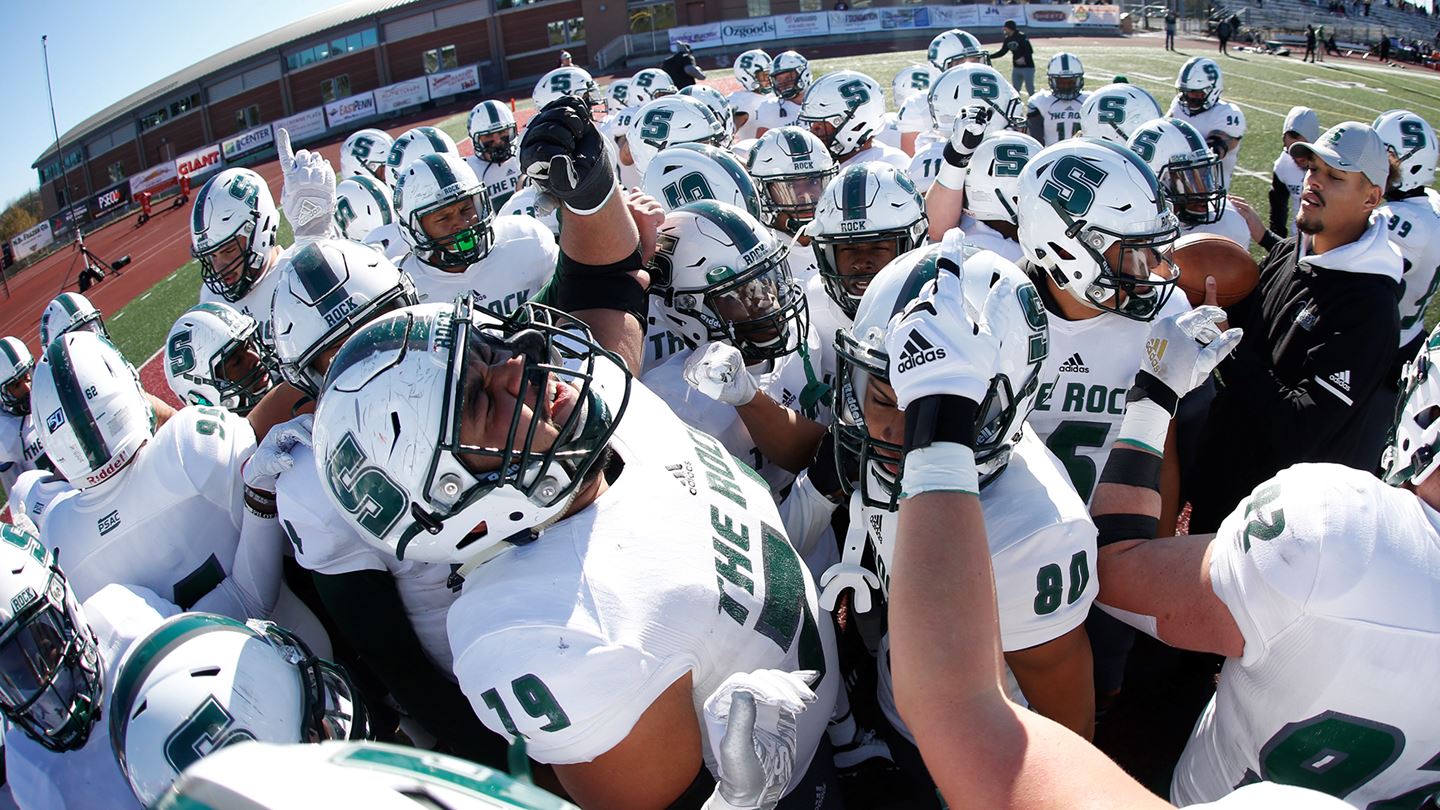 In 1969, Bob Payne, a sportswriter for the Spokesman-Review in Spokane, Washington, asserted that Slippery Rock, a small teachers’ college in western Pennsylvania described as “everyone’s favorite football team,” should play in the Rose Bowl instead of either Michigan or Southern Cal.

Presumably with a slight grin, the longtime sportswriter argued that Michigan was going to the Rose Bowl merely by grace of the bowl’s Big Ten-Pac 8 agreement.  So, too, was USC.

Slippery Rock, of course, was no stranger to the Rose Bowl — the stadium, not the bowl game — having been pummeled 62-6 by undefeated Cal State Los Angeles in the historic stadium before a crowd of 15,836 five years earlier.  Cal State Los Angeles was the nation’s third-ranked small college team at the time while The Rock entered the game with a losing record (3-4-1).

As you can see, it was a circuitous route, but an increasingly scenic one.

Now it was getting interesting.

The Gophers, after all, defeated Michigan State earlier that year and the Spartans had prevailed 23-12 against Rose Bowl-bound Michigan that autumn.

Payne further contended that The Rock could have just as easily represented the Pac 8 in the Rose Bowl that year.  After all, using the scenario described above, Michigan had beaten Purdue, which beat Notre Dame.  And the Joe Theismann-led Fighting Irish had tied USC 14-14 before a sellout crowd of 59,075 at Notre Dame Stadium in October.


The legendary Ara Parseghian’s Notre Dame squad, which posted an 8-1-1 regular season record before falling to top-ranked Texas 21-17 on a late touchdown in the Cotton Bowl, played an enormous role in Payne’s delightfully imaginative second scenario placing Slippery Rock in the Rose Bowl, representing the west.

More than three decades earlier during a dispute over who the 1936 college football national champion should be — the polls were evenly split between Minnesota and Pitt, as were most college football fans across the country — another sportswriter boldly claimed that Slippery Rock was, indeed, the No. 1 team in the country.

He, too, followed a somewhat circuitous route in coming to his conclusion, but one much shorter than the never-ending journey outlined by Payne more than thirty years later.  It was a somewhat straightforward path involving just seven games.

In making his case, the earlier writer explained that Slippery Rock had beaten Westminster 14-0 in one of five shutouts by The Rock that season.  According to the scribe, Westminster had defeated West Virginia Wesleyan that year.

Incredibly, tiny West Virginia Wesleyan, a small Methodist college with 387 students, later stunned nationally-ranked Duquesne — the Gridiron Dukes were a major power at the time — upsetting the Dukes 2-0 on a safety barely two minutes into the game before 10,000 stunned fans in Pittsburgh.  It was one of the most startling upsets in college football history.

Duquesne had blanked top-ranked Pitt 7-0 only a week earlier.  Mighty Pitt, of course, had beaten Notre Dame 26-0, which, in turn, defeated Northwestern 26-6, which had knocked off previously undefeated Minnesota 6-0 a few weeks earlier.

Who could argue with such reasoning?

Nobody apparently bothered to check that Westminster — the team Slippery Rock had beaten — and West Virginia Wesleyan never actually played each other that year.  Newspapers across the country carried the story — a delightful tale involving a small school with an unusual name poking fun at the country’s major college football powers — and the Slippery Rock legend was born.

The latter story even led to a game between Slippery Rock and Boston University in Fenway Park the following season.


Those stories, of course, were all in good fun, but they added immensely to Slippery Rock’s growing “mystique.”

In 1959, the public-address announcer at Michigan Stadium in Ann Arbor, who found the school’s name somewhat humorous, began including the Slippery Rock scores with those of the major games taking place.  The fans ate it up and it became a tradition.

The Rock quickly developed a loyal following in the Wolverine State and possibly has as many or more fans there to this day than in northwest Pennsylvania.

It was almost surreal.

In fact, for years many college football fans throughout the country thought it was some sort of prank and that Slippery Rock didn’t really exist.

Largely as a result of the Michigan public address announcer’s actions two decades earlier, Don Canham — Michigan’s brilliant athletic director — invited Slippery Rock to play PSAC foe Shippensburg State in Ann Arbor in 1979.  Nobody expected a large turnout for a small college game between two Pennsylvania schools, but the place was rocking, drawing 61,413 fans — the largest crowd to ever watch a Div. II football game.  The game was even covered by ABC’s Wide World of Sports.

That was a larger crowd, in fact, than Michigan, which was ranked sixth in the country at the time, attracted that same weekend while playing the California Golden Bears in Berkeley.

One former Slippery Rock player recalled a time he was sitting in a 747 waiting to depart from Tokyo when a passenger sitting directly behind him put his hand on his shoulder and said, “Slippery Rock!  You guys play some pretty tough football down there, don’t you?”  The startled ex-football player, proudly wearing a Slippery Rock jersey, turned around, and said, “Yes, we do, Mr. President.”

A reporter for USA Today, moreover, once wrote that Slippery Rock was the country’s cult football team.

Cult or not, over the years Slippery Rock has fielded quite a few impressive teams and has played its share of schools that now compete at the NCAA Division I level, whether it’s in the Football Bowl Subdivision (FBS) or the Football Championship Subdivision (FCS), or what used to be known as Div. I-AA.

Among other encounters with much bigger schools, the Rock played then Div. I-AA Central Florida extremely tough in the Citrus Bowl in Orlando in 1990, losing to UCF 24-21 on a late 77-yard drive, culminating in a game-saving touchdown with 59 seconds remaining.  It would have been a huge upset as the heavily-favored Knights were expected to win that game by four, five or even six touchdowns.


Slippery Rock is also 4-0 all-time against Buffalo and Kent State of the FBS Mid-American Conference (MAC).  The Rock once mercilessly clobbered the Golden Flashes 82-0.  The Rockets, as they were known back then, lost narrowly to Nicholls State in Thibodaux, Louisiana, in 1972, beat Towson in 1980, upset Dayton 34-17 in 1983, and gave current FCS power South Dakota State everything it could handle before falling to the Jackrabbits 32-28 during their one and only meeting in 1994.

While the Rock has never been able to defeat Duquesne or Youngstown State (both of whom now compete in the Div. I FCS), posting a combined 0-14 mark against both schools, they’ve played each of them tough on several occasions.

Slippery Rock also blew out Howard Schnellenberger-coached Florida Atlantic University 40-7 in front of a crowd of 25,632 at Pro Player Stadium in that school’s inaugural game in 2001.  Even the old dream weaver himself who expected a tough game when he scheduled Slippery Rock after failing to slate Cornell, was stunned by the magnitude of the defeat.  Ironically, there were five Slippery Rock alumni on Schnellenberger’s FAU staff that year.

Avidly promoting the game, enthusiastic Slippery Rock fans and alumni in the Sunshine State had purchased a large billboard on the Florida Turnpike, south of 595, emblazoned with the words, “The Rock Rolls into Florida!”  Did it ever.

Despite its rich and colorful history and its place in football folklore, unbeaten Slippery Rock (13-0) — the school’s sixth undefeated team in program history — has never appeared in a national championship game.

That can all change this weekend if fourth-year head coach Shawn Lutz’s eighth-seeded team — coming off a 51-30 shellacking of Shepherd in the second round and a thrilling 65-59 win over Notre Dame of Ohio in last weekend’s quarterfinals — manages to prevail this afternoon against third-ranked Minnesota State (13-0) in a semifinal matchup at SRU’s Mihalik-Thompson Stadium.  It should be a great game.

If Slippery Rock wins this afternoon — and there will be a lot of folks in Pennsylvania, Michigan and elsewhere pulling for them — it will advance to the NCAA Div. II championship game in McKinney, Texas, on Dec. 21 against the winner of today’s other semifinal game between Ferris State (12-0) and road-weary West Florida (11-2) in Big Rapids, Michigan.