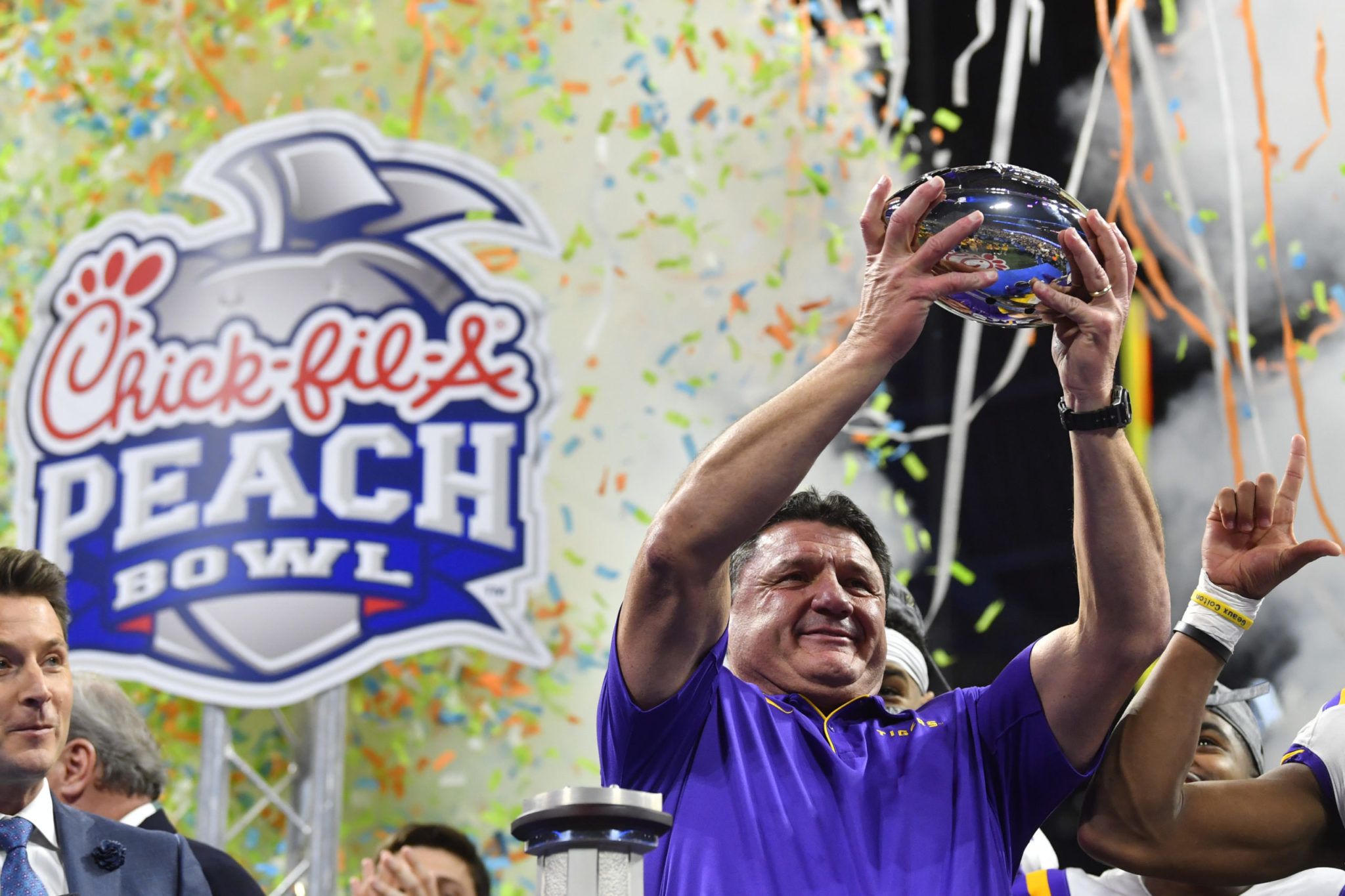 LSU got the drama out of the way early while Clemson needed almost all 60 minutes in a white-knuckle contest.

Either way, the result was the same: The two teams of Tigers were victorious Saturday in the College Football Playoff semifinals and are now headed to New Orleans for a clash in the title game on Jan. 13.

LSU is moving on after a brilliant offensive performance in a 63-28 win against Oklahoma. Joe Burrow threw for 493 yards and seven touchdowns and now the Tigers will try for their first national title since Jan. 7, 2008, when they beat Ohio State 38-24 in New Orleans.

They’re headed back to the Big Easy, which is an easy 80-mile drive down Interstate 10 from LSU’s campus. The Tigers will face Clemson, which will try for its third national title in four seasons.

Burrow, the Heisman Trophy winner, continued the amazing second act of his college career after transferring to Baton Rouge from Ohio State. The senior tied a record for any bowl game with his seven passing touchdowns against the Sooners on Saturday. Justin Jefferson caught four of them, which also tied a bowl record.

In the thrilling nightcap, Clemson extended its nation-best winning streak to 29 games, falling behind 16-0 in the first half before taking advantage of ill-timed Ohio State penalties to pull within 16-14 by halftime. The Tigers jumped ahead 21-16 in the third quarter but fell behind again when Ohio State scored to make it 23-21.

Clemson rallied in the final minutes, scoring with 1:49 left on Trevor Lawrence’s 34-yard pass to Travis Etienne and then completing the 2-point conversion for a 29-23 lead. The win wasn’t secure until there were 37 seconds left, when Clemson’s Nolan Turner snagged an interception in the end zone.


“I mean, what a football game,” Clemson coach Dabo Swinney said during the postgame celebration. “It’s a shame somebody had to lose that game.”

Orgeron will be making his first appearance in the title game as a head coach. Swinney is a veteran of the playoffs, leading the Tigers to the title game for the fourth time in five seasons.

This will be just the fourth meeting between Clemson and LSU. The last was in the 2012 Chick-fil-A Bowl on New Year’s Eve, which Clemson won 25-24.

LSU’s win puts a team from the Southeastern Conference back in the title game for the 13th time in 14 seasons.