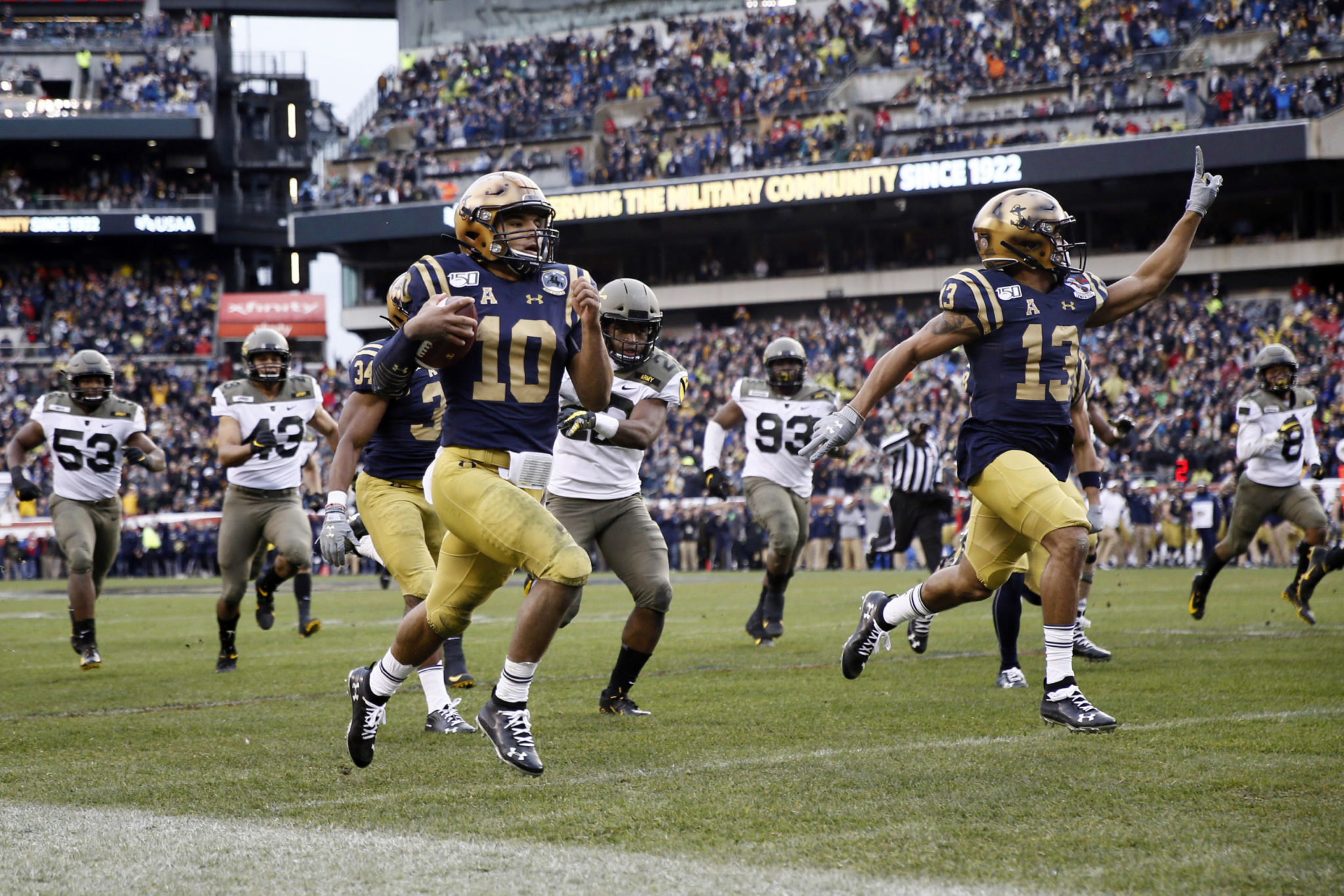 Navy coach Ken Niumatalolo wrapped Malcolm Perry tighter than an Army defense could muster for an embrace that served as a bit of an apology.

Perry had done it all for Navy in a 31-7 victory Saturday that earned him MVP honors in the 120th game between the service academies. Perry became the fourth quarterback in FBS history to rush for 300 yards, running for 304 yards with two touchdowns, and set a slew of program records.

It forced Niumatalolo to go on TV and issue a mea culpa: “I’m a bad coach. How did I bench him last year?”

Perry’s biggest number? For the senior it was one, as in, the first time he led the No. 21 Mids past Army.

“This was the biggest game I’ve played in my life,” Perry said. “We didn’t win the last three games. But that makes this even more sweet.”

Navy (10-2, No. 23, CFP) used a trick play to help reverse a rare losing streak against Army and won the Commander-In-Chief’s Trophy for the 16th time.


Perry, the 5-foot-9, 190-pound senior quarterback, helped the fleet-of-foot Navy offense run away with the game. He ran for a 55-yard TD in the first half, added a 44-yard scamper and set Navy season records in yards rushing and total 100-yard games.

“We wanted to open up the box. The last few years, we played in a phone booth,” Niumatalolo said. “We didn’t want to play that way. We wanted to spread things out and let Malcolm’s talent take over.”

But Perry’s role in Navy’s most GIF-worthy play didn’t end up with his name on the scoring sheet.

Perry took the snap at the 1-yard line, ran to his left and handed off the ball to receiver Chance Warren, who threw to Jamale Carothers for the score and a 14-7 lead. It was Navy’s twist on the Philly Special — the Naval Special? — at the home of the Philadelphia Eagles.

It was Navy’s only yard passing of the game.

“I kind of suspected it when we got down there,” Perry said.

Perry, who ran 29 times, did not attempt a pass and Army surprise starter Christian Anderson threw just two times. There was more running at Lincoln Financial Field than at the Penn Relays held down the road each spring.

Anderson wasn’t even listed on the two-deep depth chart and got the call over Kelvin Hopkins Jr. Hopkins had two rushing touchdowns last year in Army’s 17-10 win over Navy and curiously played only mop-time in Saturday’s loss. Anderson sparked the Black Knights on the game’s methodical 10-minute, 41-second opening drive, scoring on a 5-yard run.

Army coach Jeff Monken said Hopkins had a pulled hamstring and only practiced once this week.

“He wasn’t going to be able to just turn it on and open up,” Monken said.

Perry needed just four plays to even the score on his first dynamic run of the game that sent the Mids into a frenzy. The traditional Philly game drew 68,075 fans and ESPN’s “College GameDay” was on hand. The Cadets and Midshipmen stood, saluted, bounced and cheered for the entirety of what’s billed as “America’s Game.” President Donald Trump attended the game for the second straight year. Trump also was at the 2016 game as president-elect.


Trump wore a red “Keep America Great” hat for the traditional coin flip in misty conditions. Army called heads, the coin landed tails and the Midshipmen deferred possession. The referee said before the toss it was with “great pride, great honor, to welcome our Commander in Chief, our President of the United States, Donald J. Trump. Mr. President, thank you for all that you do.”

With pride and patriotism stretched end zone to end zone, Trump sat on the Army side of the field in the first half and crossed the field to the Navy side for the second half.

Carothers crossed the goal line for a 5-yard score in the third that made it 21-3 and sent the 10½-point favorite Mids on their way toward clinching the CIC Trophy, awarded to the team with the best record in games among the three service academies.

“We’re taking it home!” Navy players yelled as they carried the trophy.

Army: The Black Knights rushed for only 123 yards after averaging 311.7 yards this season, good enough for second nationally. Army had to surrender the CIC Trophy after winning it in consecutive seasons for the first time in program history.

“I wish I could pick out one thing that went wrong,” Monken said. “We just never seemed to be playing as well as we’re capable of playing. We’re never going to be so talented that we can line up and whip a team on talent alone. When there’s mistakes, they can be very costly for us.”

Navy: Is trying to finish the season ranked in the AP Top 25 for only the third time (2004, 2015) in the last 56 years. Navy has been ranked during the season four times in the last five years. The Mids also improved to 11-2 over Army at Lincoln Financial Field.

Niumatalolo became the winningest coach in the history of the Army-Navy series with nine. Army’s Earl Blaik went 8-8-2 from 1941-1958.

Perry also became Navy’s single-season record holder in total offense (2,831 yards). He also became the career leading rusher in the Army-Navy series, and he had the most rushing yards in a single game in the series.

Army’s season is over.

Navy plays Kansas State on Dec. 31 in the Liberty Bowl.