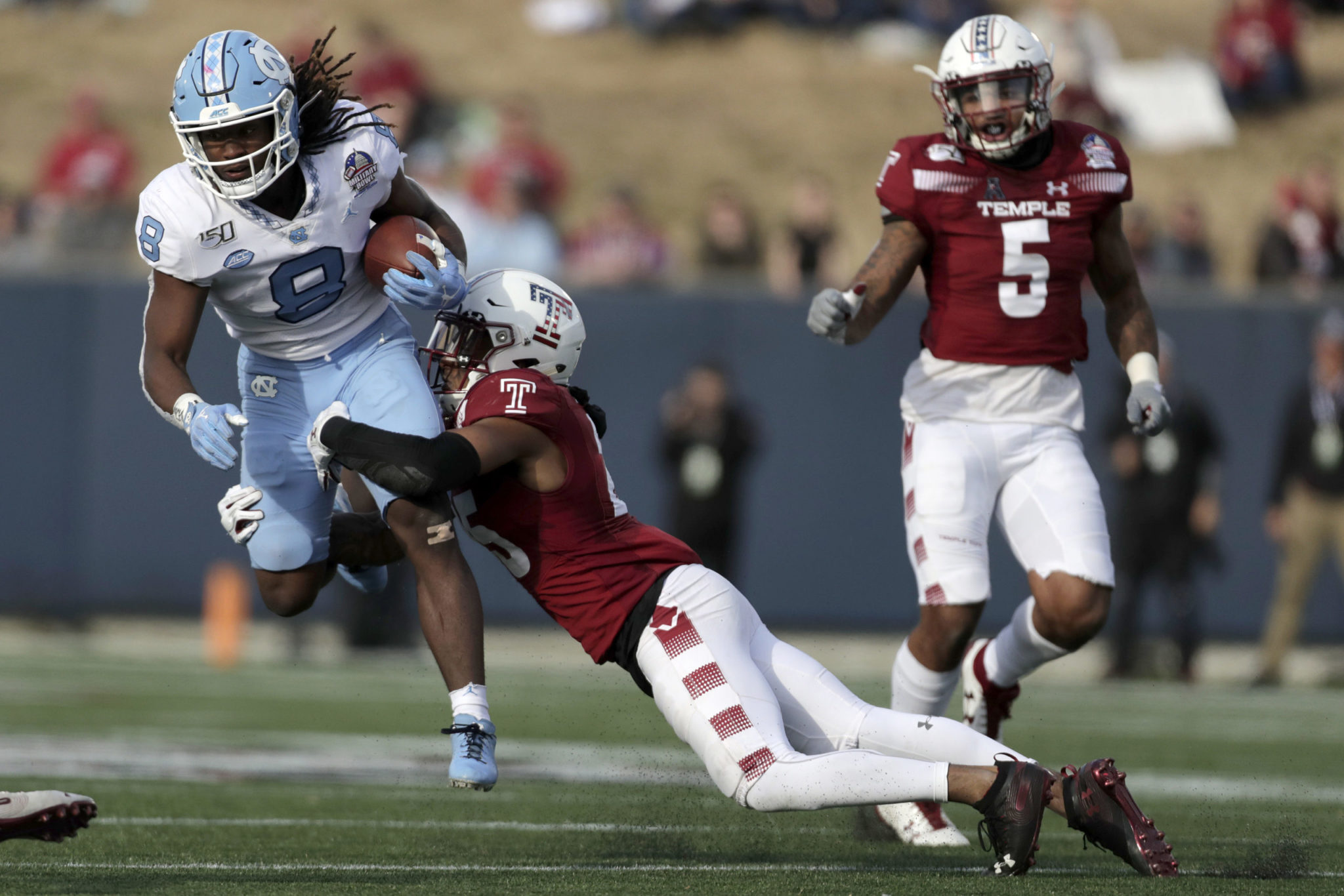 Freshman Sam Howell threw for 294 yards and three touchdowns in addition to catching a TD pass, and North Carolina blew out Temple 55-13 in the Military Bowl on Friday to cap a satisfying return season for coach Mack Brown.

Howell completed 25 of 34 passes and ran for 53 yards on three carries to help the Tar Heels (7-6) secure their first bowl victory since 2013. North Carolina was 4-6 before winning its last two regular-season games to qualify for a bowl bid.

Temple (8-5) has gone to a bowl game five years in a row — and lost four of them. This was the Owls’ first trip under coach Rod Carey, who came to Temple after a run of six-plus seasons at Northern Illinois in which he was 0-6 in the postseason.


North Carolina went 3-9 in 2017 and 2-9 last year before hiring Brown, who coached the Tar Heels from 1988-97 prior to heading to Texas for a 16-year stay. Coming off a five-year absence from coaching, the 68-year-old Brown can attribute a portion of his success to securing Howell, a high school star in North Carolina who initially committed to Florida State.

Closing out a sensational debut season at the college level, Howell threw a pair of touchdown passes before halftime to stake the Tar Heels to a 20-6 lead. UNC pulled away early in the third quarter by scoring two touchdowns in a 12-second span, the last on a 20-yard interception return by Storm Duck.

Howell completed the third-quarter blitz by catching a 2-yard TD pass from wide receiver Rontavius Groves at the end of a razzle-dazzle reverse to make it 41-6.

Howell threw 38 touchdown passes this season, most by a true freshman in FBS history. His 3,641 yards passing are an Atlantic Coast Conference record for a freshman who has not redshirted.

North Carolina missed a 50-yard field goal on its first possession, then covered 63 yards on two plays for a 7-0 lead. Howell ran for 24 yards before connecting with Dyami Brown in the left corner for a 39-yard score.

It was 10-0 before the Owls used a 60-yard pass from Anthony Russo to Jadan Blue to set up a short touchdown run. The conversion was blocked.


The Tar Heels then moved 75 yards on eight plays, going up 17-6 when Dazz Newsome got behind safety Amir Tyler on a 16-yard touchdown catch. Officials initially ruled Newsome made the catch out of bounds, but a replay determined he had his right foot in the end zone while gaining possession of the ball.

Newsome made an even better catch early in the fourth quarter, snaring the ball in the left back corner of the end zone behind two defenders and getting one foot in before tumbling backward at the end of a 29-yard score.

North Carolina: The Tar Heels could not have asked for a better way to build enthusiasm for the 2020 season. Things appear to be looking up for UNC, especially because Brown recently welcomed a solid recruiting class.

Temple: The Owls have only been to nine bowl games in school history, so this five-year streak is not being taken for granted. There will come a time, however, when just getting to a bowl game won’t be good enough.

Blue had eight catches for 92 yards to become the first player in Temple history to eclipse the 1,000-yard mark in a single season. Blue got the record on the 60-yarder that set up Temple’s first score. After making only three catches as a redshirt freshman last year, Blue finished with 95 receptions for 1,067 yards and four TDs in 2019.

North Carolina: Brown said all the team’s juniors intend to return next season. UNC opens the 2020 season at Central Florida.

Temple: The Owls lose 16 seniors, only one of whom started on offense. Temple plays at Miami for the 2020 opener.

David Ginsburg writes about sports for The Associated Press.