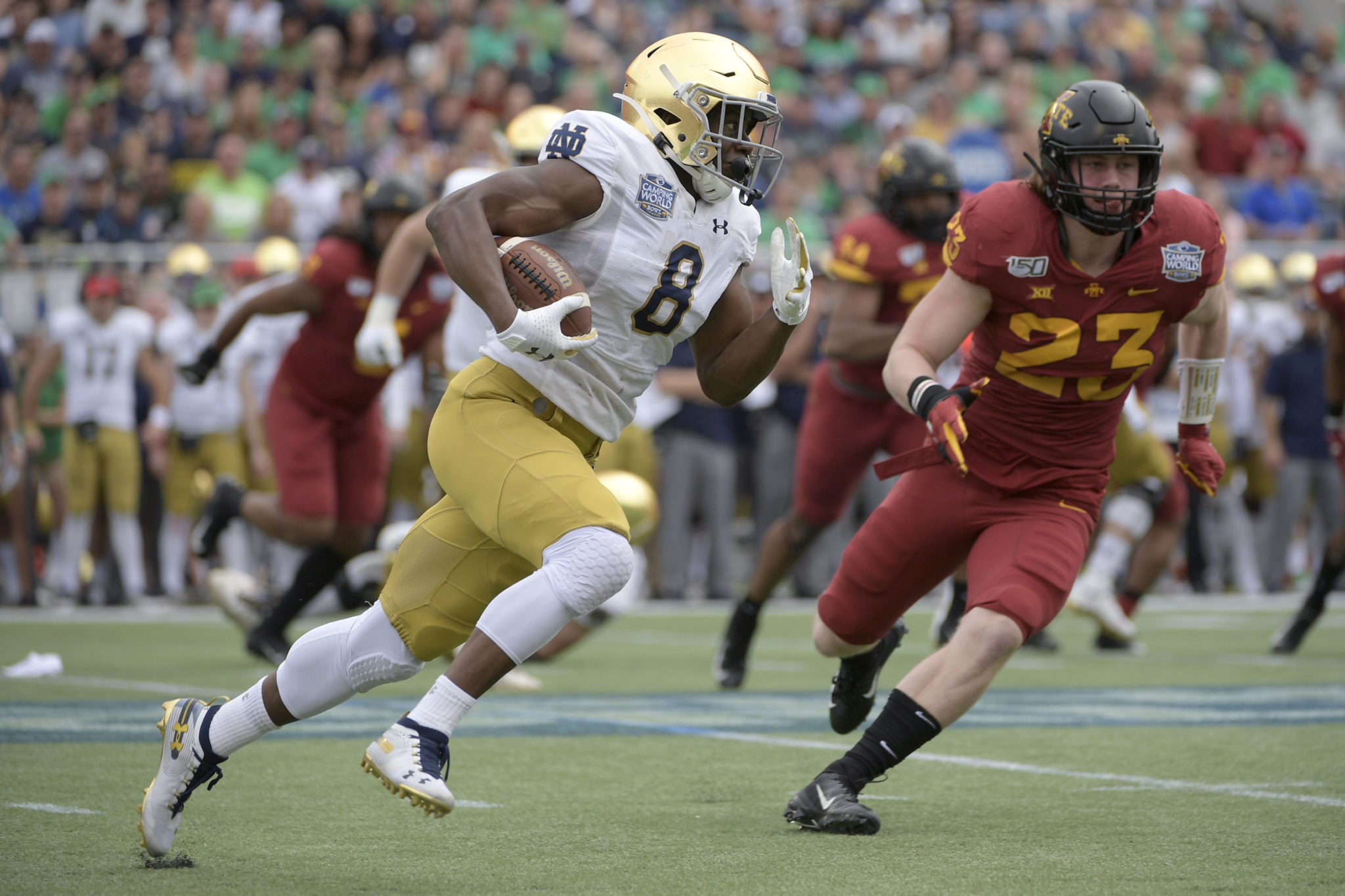 Ian Book threw for 247 yards and one touchdown and Tony Jones Jr. scored on an 84-yard run, helping No. 14 Notre Dame dominate Iowa State 33-9 on Saturday in the Camping World Bowl.

Book completed 20 of 28 passes without an interception, including a 27-yard TD throw to Chase Claypool as the Fighting Irish (11-2, No. 15 CFP) wrapped up another double-digit win year on a six-game winning streak. Claypool had seven receptions for 146 yards and was named game MVP, while Jones finished with 135 yards rushing.

Brock Purdy was 17 of 30 for 222 yards and no interceptions for Iowa State (7-6). However, the sophomore quarterback was unable to get his team into the end zone after throwing for a Cyclones’ single-season record 27 TDs during the regular season.


Notre Dame’s defense was superb, forcing two first-quarter fumbles that helped the Irish build a 20-6 halftime lead. Jones scored on Notre Dame’s first play from scrimmage in the third quarter, circling the left end and heading up the sideline in front of the Iowa State bench.

Cornerback Tayvonn Kyle caught up to the 5-foot-11, 224-pound Jones at the Cyclones 10 yard line but was unable to fight off the running back’s stiff arm and was carried into the end zone.

Jafar Armstrong also scored on a 1-yard run for the Irish, who got four field goals from Jonathan Doerer.

Notre Dame: The Fighting Irish had 26 takeaways during the regular season, including a nation-leading 17 fumbles. The defense set the tone from the start against one of the Big 12’s top passing attacks and never really allowed the high-scoring Cyclones to establish a rhythm offensively. As expected, the 6-foot-4, 229-pound Claypool was a difficult matchup for Iowa State’s smallish secondary. The Irish also outrushed the Cyclones 208-45, with a huge chunk of that advantage being built on Jones’ long scoring run.

Iowa State: After losing four games to ranked opponents by a combined 11 points during the regular season, the Cyclones were looking for a signature win against Notre Dame. Instead, they dug a hole with the early turnovers and never escaped. Until Jones’ long run put the Irish up by three TDs, it was a fairly close game statistically. Notre Dame ran 33 plays and gained 207 yards in the first half, while Iowa State had gained 204 yards on 32 plays up to that point. Ultimately, the difference were the fumbles and the Cyclones’ inability to get the ball in the end zone after scoring a school single-season record 53 touchdowns and 409 points during the regular season.

Notre Dame: The Fighting Irish have won 10 or more games in three consecutive seasons for the first time since 1991-93. Book is a senior but has a year of eligibility remaining. Coach Brian Kelly faces some tough decisions for 2020, including naming an offensive coordinator after parting ways with Chip Long earlier this month. Quarterbacks coach Tommy Rees called plays in the Camping World Bowl. The Irish open next season against Navy in Dublin, Ireland, on Aug. 29.

Iowa State: The Cyclones have won 23 games over past three seasons, one shy of the program record for a three-year span. With Purdy returning after setting single-season records for passing yards, passing touchdowns, completions and total offense, the future seems bright — especially if they can turn some of those narrow losses that kept them from being more successful this year into victories. The Cyclones begin next season at home against South Dakota on Sept. 5.