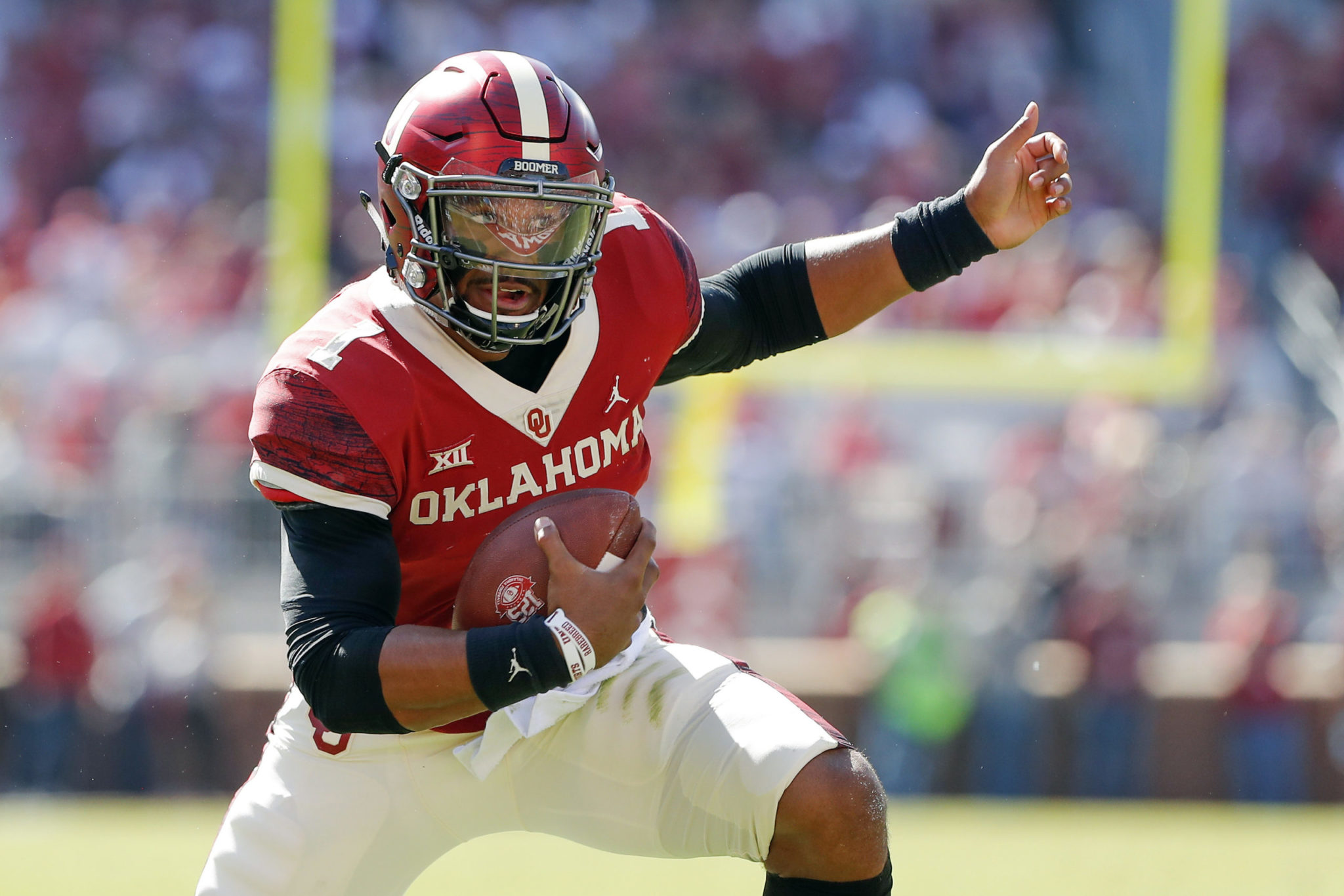 Almost begrudgingly, Jalen Hurts is having some fun.

His Oklahoma teammates and coaches have defended their quarterback when asked about Hurts seemingly aloof personality, saying there’s more to one of college football’s most successful players in recent years. Hurts has let loose on a few occasions, revealing another side of the Alabama transfer.

“I told Jalen before he came here that if he did come here, that one of my goals was going to be for him to be able to enjoy it and have fun with it,” Oklahoma coach Lincoln Riley said. “I think that’s an important part of this game. (I) have had guys like him before that take it so seriously. And he does have fun — he has more fun with it than probably you guys see on the outside.”

It’s understandable given his path why Hurts remains so focused. he knows how quickly things can change.


He was Alabama’s starting quarterback for two seasons before Tua Tagovailoa replaced him at halftime of the national championship game following the 2017 season. Tagovailoa rallied the Tide to victory against Georgia and got the starting job the next year. Hurts stayed at Alabama instead of transferring and in ironic twist of fate, he endeared himself to Alabama fans by rallying the Tide past none other than Georgia in the Southeastern Conference championship game after Tagovailoa was injured.

After graduating from Alabama, Hurts transferred to Oklahoma — where he is having a memorable run. He was the Heisman Trophy runner-up and has led the Sooners to the College Football Playoff. He has passed for 3,634 yards and 32 touchdowns and rushed for 1,255 yards and 18 touchdowns. He’ll play in the College Football Playoff for the fourth time when Oklahoma faces top-ranked LSU on Saturday in a national semifinal.

He allowed himself to relax a bit after the Sooners rallied from 25 points down to beat Baylor in the regular season — albeit just momentarily.

“Well, it’s something you want to try to soak in,” he said. “The greatest comeback in school history. Something that we wanted to enjoy. But now, that great comeback is not going to win us the game this week. We completely understand that, and I think we have the right focus going into it this week, playing TCU, as far as that. We’re just ready to attack practice and get better.”

If it was up to Hurts, he’d probably never talk about any of it. He prefers to “keep the main thing the main thing,” as he sometimes says.


“The ‘main thing’ is going out there and attacking every single day, every opportunity we have to get better,” he said. “Attacking and trying to improve. Taking big steps. That’s the main thing.”

“I really enjoy that from him,” Oklahoma center Creed Humphrey said. “I’m kind of the same way. I don’t really pay attention to statistics. It’s all about doing your job to the best of your ability on every play. That’s his attitude toward everything. I love it.”

Hurts definitely has a different approach than some of his peers.

When asked about the rivalry with Texas the week of the game, he quipped, “Everybody’s a rival.” When asked if he did anything fun while he was in New York for the Heisman Trophy ceremony, he said, “Got some cheesecake.”

Running back Trey Sermon once called Hurts an “old head” who listens to old-school music and makes jokes his uncle would make.

Even as Hurts presents himself as stoic, he has occasionally shown a desire to be more animated. In Oklahoma’s spring game, he took a photo with his teammates in an end zone celebration — something he said he wouldn’t have done at Alabama.

“He can certainly loosen up, laughs and jokes and has fun,” Riley said. “There’s certainly that side to him as well. As you can see, he’s about business. That’s certainly his mentality. It’s not that he can’t loosen up, smile and have fun because he can. He’s very driven. He’s a very focused guy.”

Oklahoma linebacker Kenneth Murray said Hurts’ teammates see more of that person than the outside world.

“Business is business, and when it comes down to improving on things and comes down to trying to be the best, you have to take those things serious, but I think he’s just like us on the team,” Murray said. “He’s a guy that we’re able to clown around with and joke around with.

Hurts probably knows that as well as anyone in the playoffs.

Cliff Brunt is a reporter for The Associated Press.