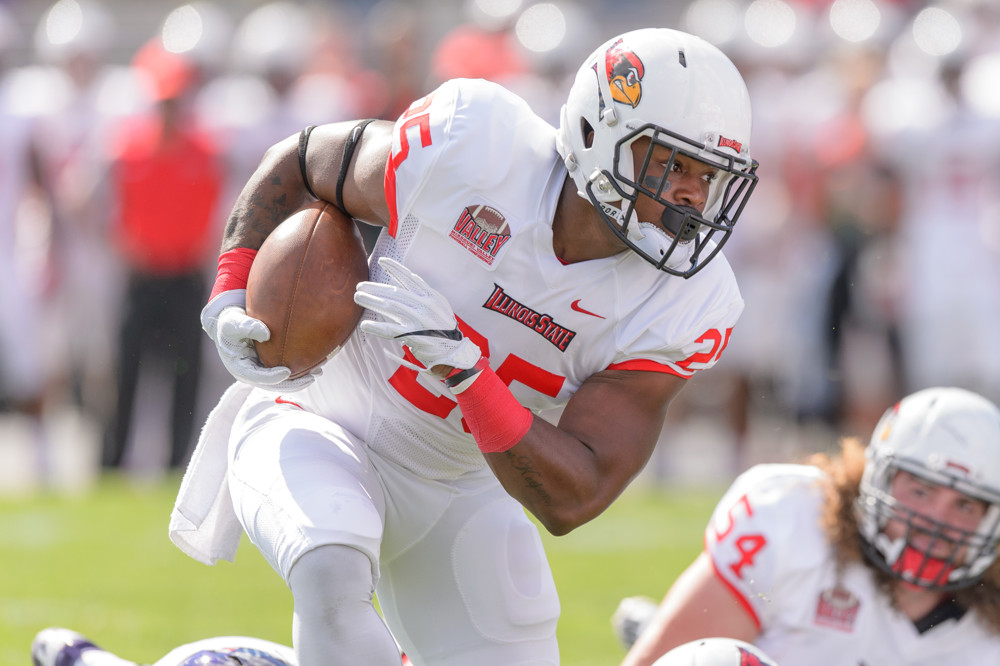 All-American tailback James Robinson has been nothing short of phenomenal in the first two rounds of the FCS playoffs.

The 5-10, 220-pound senior from Rockford, Illinois, rushed for a career-high and program record 297 yards and a touchdown in Illinois State’s 24-6 victory over twelfth-ranked Southeast Missouri in Cape Girardeau, Mo., in the opening round of the playoffs two weeks ago, thereby enabling ISU to control the ball for 36 minutes and 18 seconds against the higher-seeded Redhawks, and dashed for 210 yards and a pair of touchdowns against No. 9 Central Arkansas in a 24-14 win in Conway, Arkansas, last weekend.

The second leading rusher in the Football Championship Subdivision behind only Monmouth’s Pete Guerriero, Robinson has rushed for 1,823 yards and eighteen touchdowns on 340 carries this season while picking up an impressive 5.4 yards per carry.


While North Dakota State (13-0), which has won an FCS record 34 consecutive games, — breaking its own 33-game record set in 2012-14 — will clearly be favored in this weekend’s quarterfinal matchup with Illinois State, if the legitimate NFL prospect and tireless workhorse remains true to form, the Redbirds (10-4) might, just might, have a shot against the top-ranked and two-time defending national champions in Fargo on Saturday.

It will be the fourth straight week that the Redbirds, who will be playing their ninth game away from home on Saturday, will be playing on the road, including the first two rounds of the FCS playoffs, but they’re getting accustomed to it.

Then again, it’s one thing to win in Cape Girardeau or Conway and quite another to turn the trick in Fargo where the dominant Bison have won twenty-six straight.

Arguably playing the best football of his career, the hard-running Robinson knows the Bison well — and they know him.  In four previous games against NDSU, Robinson has averaged 112 yards per game, including galloping for 128 yards and an 11-yard touchdown run on twenty carries in a 28-14 loss in Fargo a year ago.

The Bison have won eight straight games against the Redbirds, including a 37-3 walloping of ISU at Hancock Stadium in Normal, Ill., earlier this year.  Robinson rushed for 112 yards in that loss.

But that was two months ago.  This is now and Robinson and the Redbirds are playing their best football of the season.


No one knows what might happen if Robinson puts together a third-straight 200-yard rushing game.

A finalist for the Walter Payton Award presented to the top player in the FCS, Robinson is reportedly slated to play in the East-West Shrine Bowl all-star game on January 18th in St. Petersburg, Florida, but he presumably has a couple of other more important games in mind before then — namely Saturday’s meeting with North Dakota State, a national semifinal contest against either Austin Peay or fifth-seeded Montana State the following week and perhaps the FCS championship game in Frisco, Texas, on January 11th.