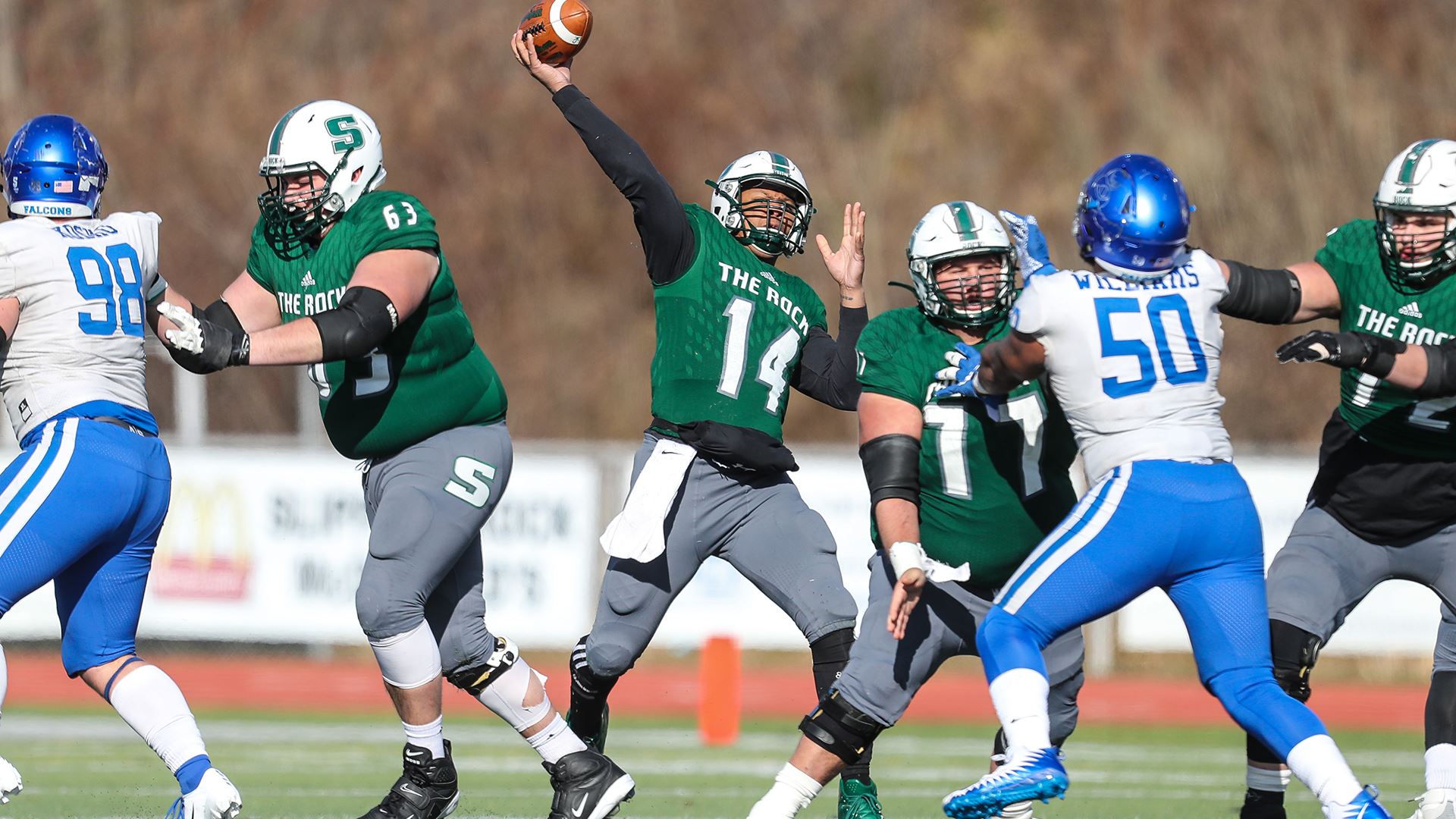 The sensational Valdosta State transfer — one of eight Harlon Hill finalists — threw for 436 yards in the high-scoring affair.  Notre Dame’s sophomore running back Jaleel McLaughlin, another Harlon Hill finalist, rushed for 126 yards and a pair of touchdowns and caught a couple of passes for 34 yards and yet another TD.

Rivers has thrown for an eye-popping 4,261 yards and fifty touchdowns this season while also rushing for 631 yards and nine scores.

There were 1,134 yards of total offense in the dizzying offensive display, including a 96-yard kickoff return by Notre Dame’s Marvelle Ross, a 5-9, 180-pound senior from Cleveland.  Ross, a wide receiver, also caught three passes for 108 yards while scoring two more touchdowns.

Avenging a disappointing 21-17 loss to the Falcons in last year’s quarterfinals, The Rock fell behind 21-7, but rallied to tie the game before a Tanner Harding field goal put Notre Dame ahead by three at the end of the first quarter.  Notre Dame accumulated a breathtaking 277 yards in the opening quarter.

Erupting for 28 points, Slippery Rock completely dominated the second quarter.  Limiting the Falcons to five total yards on ten plays, The Rock went into the locker room with a 49-31 lead at halftime.

Slippery Rock added to its lead early in the third quarter on a field goal following a fake punt, but Notre Dame refused to surrender and eventually trimmed SRU’s lead to six points with 6:29 remaining in the game.

After a Slippery Rock drive stalled, the Falcons took over at their own 35 with 1:52 remaining in the game, but SRU’s redshirt junior Shane Schuback, a 6-2, 235-pound linebacker from Old Forge, Pennsylvania, picked off a Chris Brimm pass at the Notre Dame 42 thirty-seven seconds later to preserve the victory.  Schuback had a season and game-high thirteen tackles in the game, including an eight-yard sack and six solo tackles.

Notre Dame finished the season with a 12-2 mark.

In other quarterfinal games, Nate Gunn rushed for 174 and three touchdowns as third-ranked Minnesota State Mankato (13-0) rolled past No. 21 Texas A&M-Commerce 42-21 on Saturday.


West Florida, which upset reigning national champion Valdosta State on the road last weekend, did it again on Saturday by upending sixth-ranked Lenoir-Rhyne 43-38 in Hickory, N.C., in another high-scoring quarterfinal contest.  Quarterback Austin Reed tossed three down passes for UWF.

In pulling off its second straight upset in the playoffs, the unseeded Argonauts ended Lenoir-Rhyne’s fifteen-game home winning streak.

UWF (11-2) will be making its second national semifinal appearance in the last three years.  Lenoir-Rhyne finishes the season at 13-1.

Remarkably, West Florida is 7-0 historically in playoff games on the road and a perfect 3-0 against previously unbeaten teams.  It bodes well for the Argonauts heading into next weekend’s semifinal round.

In eliminating the Bearcats from the quarterfinals for the second straight year, defensive-minded Ferris State, led by senior defensive back Najeem Hosein, limited Northwest Missouri (12-2) to 158 total yards while forcing three turnovers.

The pairings of next week’s semifinal games will be announced by the NCAA later this evening.