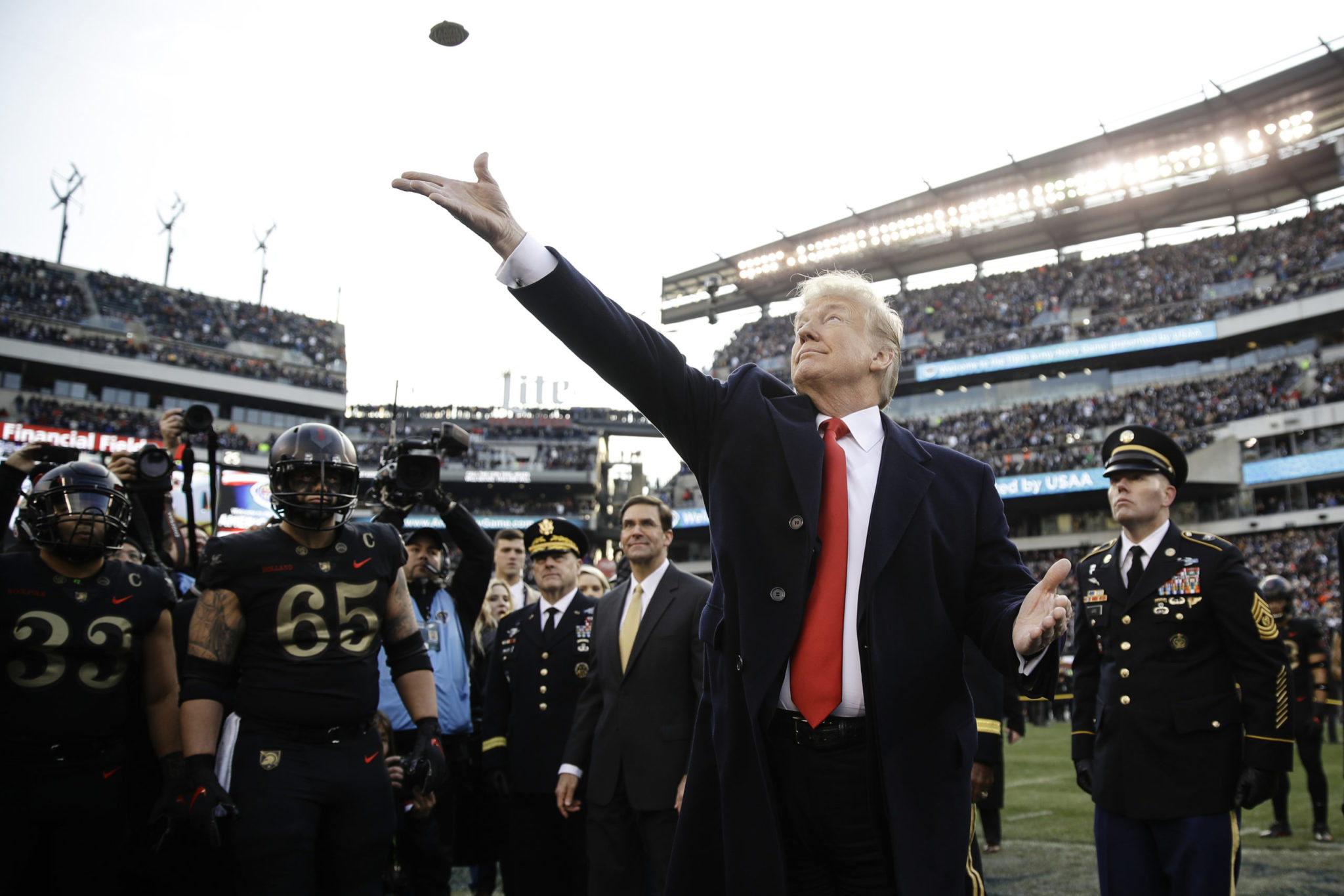 For the second year in a row, President Donald Trump booked the annual Army-Navy football game on his schedule.

Saturday’s game in Philadelphia is the 120th meeting between the two service academies and holds a singular place on the sports calendar.

The 2019 matchup most likely will feature a lot of rain in addition to a heaping of tradition and salutes to service. Trump, who also was at the game in 2016 as president-elect, is the 10th commander in chief to attend the contest.

In 2016, Army snapped Navy’s 14-game winning streak and has now won three years in a row. But the Midshipmen entered Saturday’s game as a significant favorite. At 9-2, they rank 23rd in the nation while Army’s Black Knights had a 5-7 record.

Traditionally, the president does not root for one academy over the other and changes sides at halftime, watching part of the game with Army fans and the other half with Navy supporters. Defense Secretary Mark Esper and the chairman of the Joint Chiefs of Staff, Gen. Mark Milley, were also expected to attend.


Trump has closely linked himself to the military, promoting increases in defense spending and overseas triumphs such as the October killing of Islamic State leader Abu Bakr al-Baghdadi in Syria.

The game also comes amid a renewed push by the White House to deliver moments that depict Trump governing — such as his visit to NATO in London last week and his successful lobbying for a new U.S.-Canada-Mexico trade deal — that it believes stands in stark contrast to the Democrats’ impeachment effort.

In the coming week, Trump is expected to become the third president impeached after the House votes on charges of abuse of power and obstruction of Congress.

Trump also has drawn the ire of many in the Pentagon. He has clashed with military leadership on a number of fronts, including on pushes to withdraw some U.S. forces from the Middle East and the Korean Peninsula as well as his at times lackluster support for military alliances such as NATO. His first defense secretary, James Mattis, resigned last year over Trump’s decision to pull troops out from Syria.


Last month, Navy Secretary Richard Spencer was fired amid tensions between the Pentagon and the White House after Trump intervened to reverse sentences against three service members accused of committing war crimes.

Trump ignored Pentagon leaders who had told him such a move could damage the integrity of the military judicial system, the ability of military commanders to ensure good order and discipline, and the confidence of U.S. allies and partners who host U.S. troops.

Among the other presidents to attend the Army-Navy game are Barack Obama, George W. Bush, Gerald Ford and John F. Kennedy.