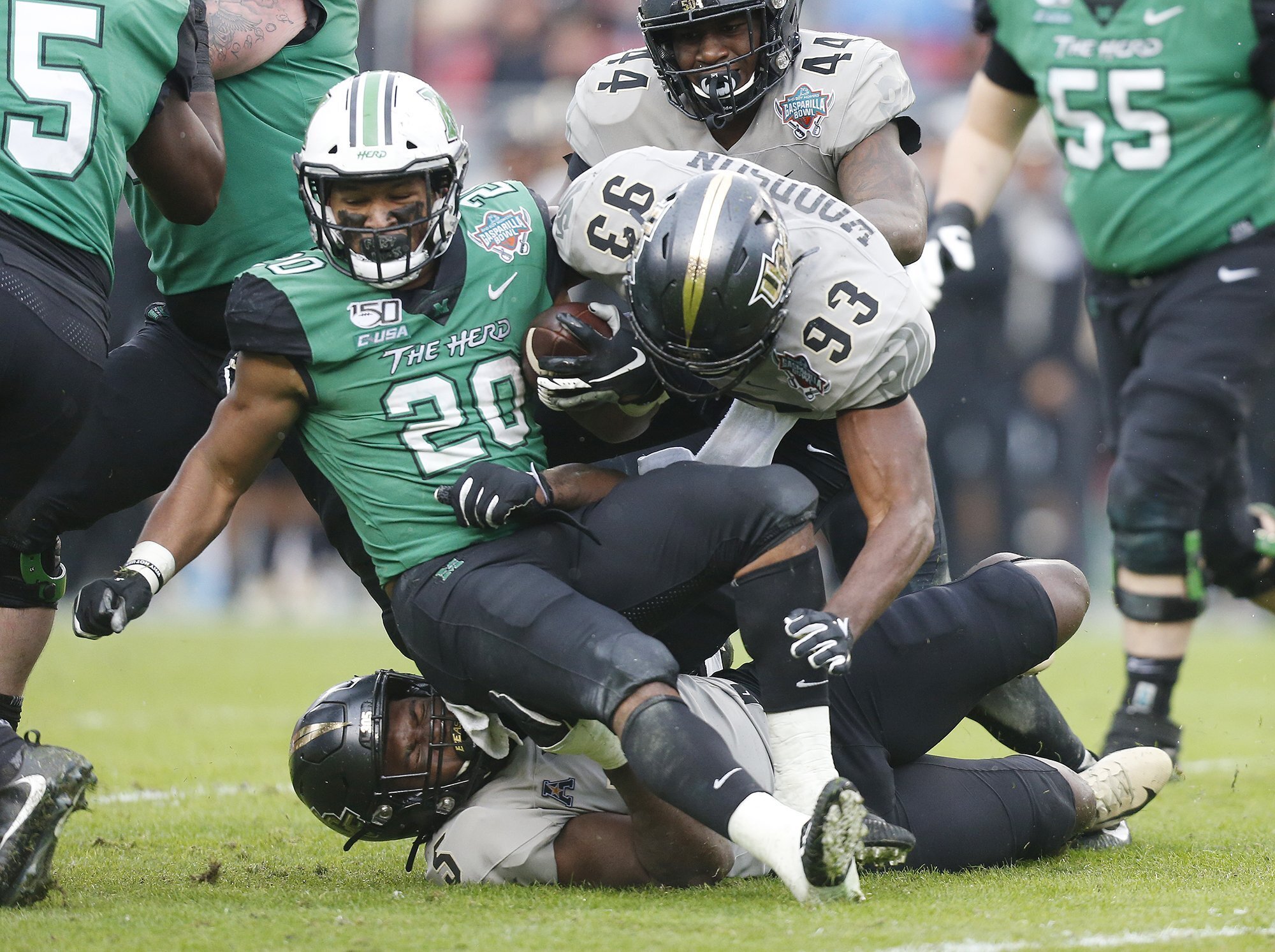 Central Florida is best known for a high-powered offense, but the Knights are capable of big plays on defense, too.

“We finished the season the right way,” UCF coach Josh Heupel said. “The turnovers were critical. I thought defensively we started about as fast as you can.”

Grant had a 39-yard interception return on Marshall’s third play from scrimmage 56 seconds into the game, and Morris-Brash recovered a fumble and ran it 55 yards for a score that helped UCF go up 21-0 with 7 minutes left in the first quarter.


Gabriel threw a 35-yard touchdown pass to Otis Anderson, connected on a 75-yard score with Marlon Williams, and added a 3-yard TD run as UCF went ahead 45-22 with 6:39 remaining in the third.

Gabriel completed 14 of 24 passes for 260 yards as the Knights (10-3) reached 10 or more wins in a school-record third consecutive season. Williams caught seven passes for 132 yards and Greg McCrae had 80 rushing yards on 14 carries.

“We’re happy with the 10-3, but at the same time we know what we could have done,” Gabriel said.

“I thought our kids fought their tail off,” Marshall coach Doc Holliday said. “They fought the entire game.”

Green had a 3-yard rushing touchdown and hit Willie Johnson on a 70-yard TD pass, and Justin Rohrwasser made a 50-yard field goal during the third quarter.


Marshall got within 21-7 with 12:28 to go in the second when Micah Abraham picked off backup quarterback Darriel Mack Jr.’s pass and returned it 75 yards for a touchdown.

Abraham’s father, Donnie, played his home games with the Tampa Bay Buccaneers (1996-01) at Raymond James Stadium, the site of the Gasparilla Bowl.

McCrae had a 26-yard TD run early in the first and Dylan Barnas made a 36-yard field goal as time expired as UCF took a 24-7 halftime advantage.

UCF: The Knights had no letdown after playing in New Year’s Day bowl games the previous two seasons, beating Auburn two years ago in the Peach Bowl and losing to LSU in the last season’s Fiesta Bowl.

“You look at this season, there’s goals that we didn’t accomplish, right?” Heupel said. “But I hope we never get to the point as a program and a fan base where fans and outside voices aren’t really appreciative of what our kids do every single day.”

Marshall: It was the first bowl loss for the Thundering Herd under Holliday, who entered 6-0 in bowls at the school. Knox, a sophomore, topped 100 yards rushing for the seventh time.

UCF lead 21-0 after the first quarter despite being outgained 133-86. Marshall, however, had three turnovers. The Knights had a 168-0 yardage advantage during the second quarter and were outscored 7-3.

UCF linebacker Nate Evans finished with 12 tackles and a sack. Defensive back Antwan Collier made six tackles, recovered two fumbles and had an interception.

Marshall: Begins the 2020 season at East Carolina on Sept. 5.