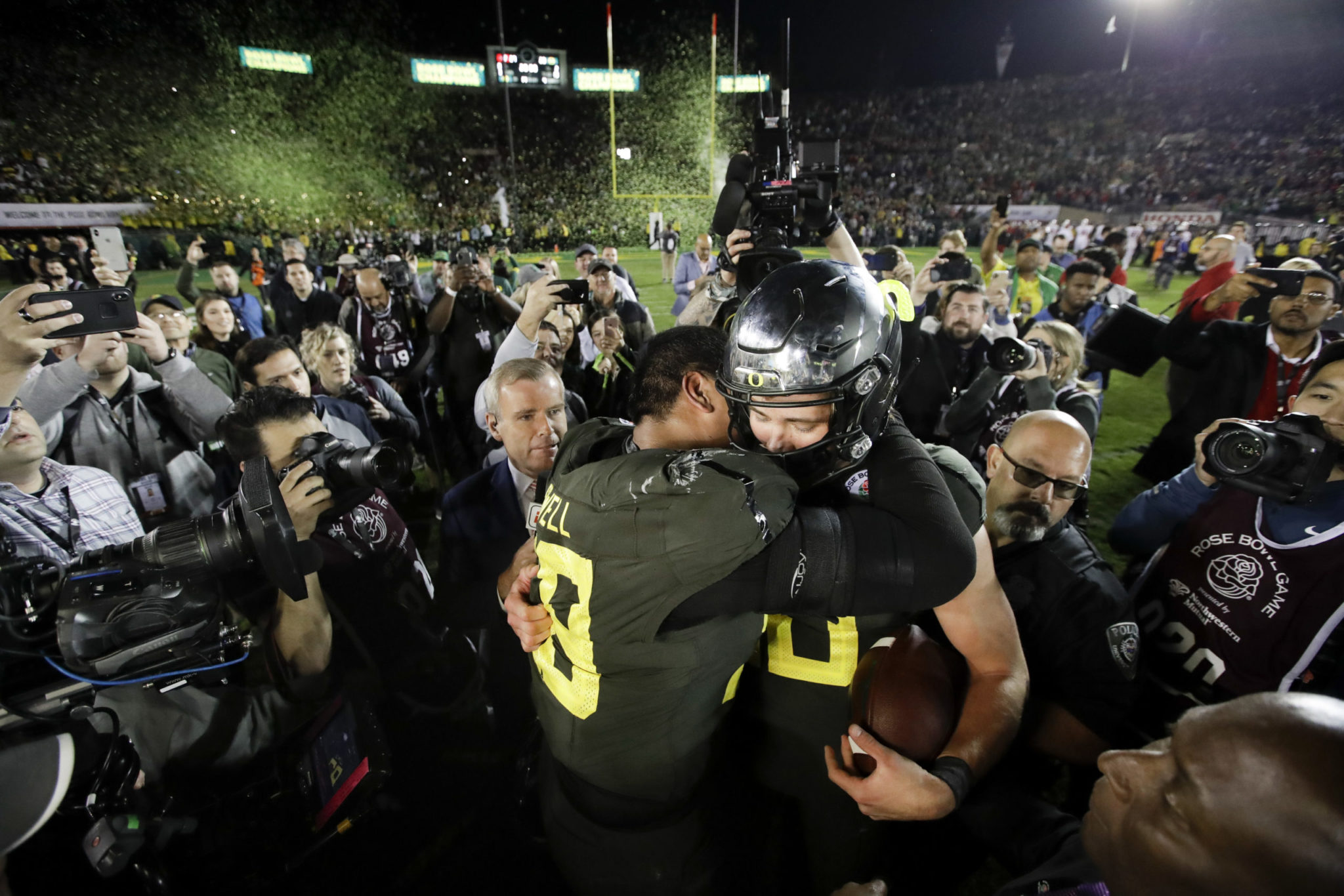 Justin Herbert faked a handoff and went on the run of his life in the fourth quarter of the Rose Bowl.

Oregon’s 6-foot-6 quarterback gracefully stiff-armed Wisconsin linebacker Jack Sanborn at the line of scrimmage. He surged downfield, found his blockers and sprinted to the green-painted end zone, even absorbing a very late hit from the frustrated Badgers as a reward.

The Eugene kid who took over his beloved hometown team during its worst season of this century had just scored the decisive touchdown of the biggest win of his career. A few minutes and a couple of big passes later, the Ducks all celebrated amid confetti and roses at midfield after Herbert’s final college game.

“I wish it wasn’t over,” Herbert said. “This has been the best four years of my life. I’ve been honored to be a part of this team.”


Herbert scored his third rushing touchdown of the 106th Rose Bowl on that thrilling 30-yard run with 7:41 to play Wednesday night, and No. 7 Oregon held off No. 11 Wisconsin 28-27 to win its third straight trip to the Granddaddy of Them All.

Herbert passed for just 138 yards without a touchdown, and Oregon (12-2) managed just 204 yards of offense — the fewest by any Rose Bowl team in 40 years. The Ducks still managed to win yet another frenetic edition of this venerated bowl game, surviving six lead changes and big special-teams mistakes by both schools.

While the offense sputtered, the Ducks scored 21 points off the Badgers’ four turnovers, including Brady Breeze’s early 31-yard fumble return for a TD off a botched punt.

And on the next snap after Breeze forced another fumble in the fourth quarter, Herbert rambled through the Wisconsin defense for that 30-yard score in what’s sure to be the signature moment of the four-year starter’s career.

“I’m going to be honest with you, we’ve been telling him to run all year,” Oregon linebacker La’Mar Winston Jr. said. “He runs in practice and torches, so I told him, ‘Man, pull that thing and get loose.’ Stiff-arming dudes. Juking dudes. Is he a running back or a quarterback? We don’t know.”


Winston’s praise aside, Herbert had only 10 rushing touchdowns in the first 41 starts of his career. He turned into a big-play ball-carrier on Arroyo Seco’s hallowed ground, and Oregon improbably relied on its quarterback’s long legs to grind out a landmark victory under second-year head coach Mario Cristobal, Herbert’s third coach in four years.

Herbert scored on runs of 4 and 5 yards in the first half, stiff-arming Wisconsin defenders on both runs. After his go-ahead TD, Herbert got back to what he normally does best: He made a key 12-yard throw to Mycah Pittman for a first down with 1:51 to play, and his 28-yard throw to Juwan Johnson with 1:03 left allowed the Ducks to run out the clock.

“We knew coming in that he was athletic,” Sanborn said. “We didn’t have good angles and miscommunications. Something we have to be better at in a game like this. It’s not the first game he ran with the ball.”

Three years after coach Mark Helfrich was fired when the Ducks went 4-8 in Herbert’s freshman season, Oregon held on to cap a Pac-12 championship campaign with its 12th win in 13 games and the fourth Rose Bowl victory in school history.

“To realize where we were, and where we are now, it’s been a great journey,” Herbert said. “For us to stick together through those tough times is just a testament to all the guys on the team, and all the hard work we’ve put in.”

Aron Cruickshank returned an early kickoff 95 yards for a touchdown for the Big Ten runner-up Badgers (10-4), but they lost in their fourth consecutive trip to Pasadena over the last 10 years, including two losses to Oregon.


Jonathan Taylor rushed for 94 yards and Quintez Cephus caught seven passes for 59 yards and a score, but Wisconsin quarterback Jack Coan’s offense couldn’t capitalize on its whopping advantages in time of possession (38:03-21:57) and total yards (322-204).

“There’s a slim chance you could win, but it definitely puts you in a tough position when you have self-inflected penalties, special teams problems, turnovers,” said Taylor, who is likely headed to the NFL. “When you’re playing an elite team like Oregon, a great team like that, they’ll capitalize on those mistakes.”

Herbert scored his first TD on the Ducks’ drive from the kickoff in 68-degree temperatures on another postcard-perfect New Year’s Day in Pasadena, but Cruickshank took the ensuing kick straight down the Oregon sideline for an electrifying score and a rarity in the Rose Bowl.

The kickoff return was just the second for a touchdown in Wisconsin’s lengthy bowl history, but just the third in 106 Rose Bowls — and the first in 17 years.

Oregon got a break right after halftime when Wisconsin punter Anthony Lotti caught the snap, but dropped the ball on the ground instead of kicking it under pressure. Breeze alertly picked it up and sprinted for the go-ahead score.

The Badgers responded with a drive capped by Mason Stokke’s 2-yard scoring run, and they went up 27-21 on a field goal with 12:09 to play.

But Breeze forced another fumble by Wisconsin’s Danny Davis with a big hit, and Herbert took the next snap on his 30-yard TD run.

Wisconsin: The Badgers will kick themselves for years after every missed opportunity here. The offense couldn’t finish drives, while the defense appeared ready for everything except Herbert’s elusiveness. They can build on this resilient season, but their Rose Bowl drought continues.

Oregon: Herbert could be sorely missed next season, both for his all-around skill set and his incredible poise under pressure. But the Ducks are once again ascendant, with this victory punctuating a two-year rise under Cristobal that puts them back on top of the West Coast and beyond.

Wisconsin: Next season starts with a visit from up-and-coming Indiana.

Oregon: With a new starting quarterback, the Pac-12 title defense season starts Sept. 5 with a doozy: A visit from North Dakota State, the FCS powerhouse currently 15-0 on its way to the national title game. A week later, the Ducks host Ohio State.