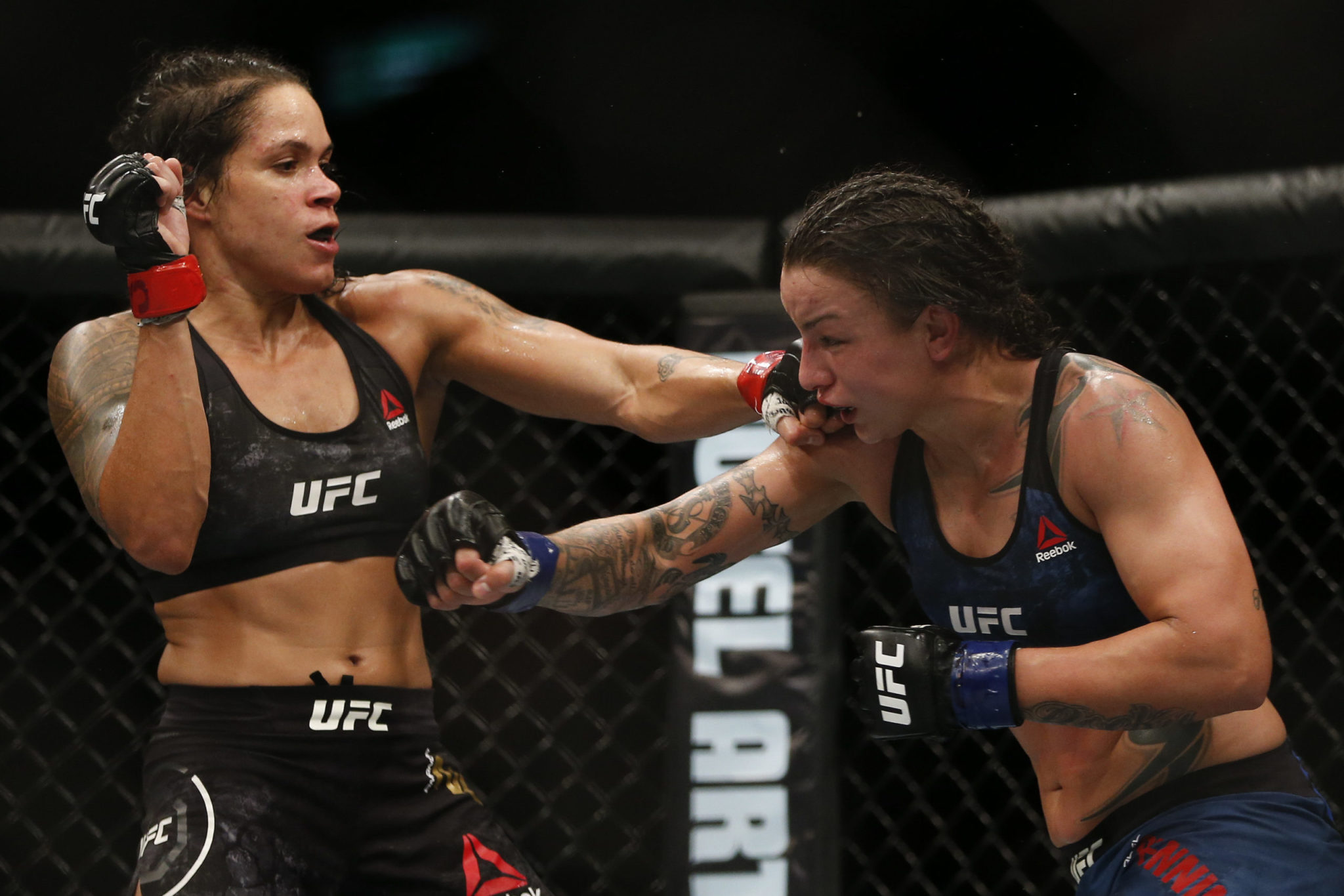 With a months-long barrage of trash talk and provocative posturing, Colby Covington and champion Kamaru Usman have infused their welterweight title bout at UFC 245 with political, racial and very personal overtones.

Before they get in the cage Saturday night, two of the UFC’s most durable, likable champions will entertain the mixed martial arts world without pandering or preening.

Max Holloway and Amanda Nunes are among the toughest and winningest fighters of their generation, and their latest title defenses against Alex Volkanovski and Germaine De Randamie are both likely to be more entertaining than the main event bout between two wrestlers who sometimes talk better than they punch.


Holloway and Nunes aren’t complaining, however. They know controversy sells pay-per-views, and they’re not mad about being along for the ride on this main event that feels more like a sideshow.

“I got to talk a little bit less at the press conferences, which is cool,” Holloway said with a laugh. “Those guys, they’ve got stuff. I wish I was a little bit lighter and I could have grabbed my popcorn. Things are getting heated up.”

The T-Mobile Arena crowd is likely to be strongly behind Holloway, the genial Hawaii native who hasn’t fought in Las Vegas since 2015. His scheduled bout here last year was scrapped at late notice when Holloway exhibited symptoms of a concussion.

“I’ve got some of the greatest minds in MMA behind me, and they make sure I’m good all around,” Holloway said.

Holloway was on a 13-bout winning streak against some of the sport’s best fighters until earlier this year, when he moved up to lightweight and lost to Dustin Poirier. Holloway rebounded with a featherweight title defense victory over Frankie Edgar, and his acceptance of another title defense against Volkanovski doesn’t mean he has given up multi-belt championship dreams.


“It’s not even the belts that intrigue me,” Holloway said. “It’s being the best mixed martial arts fighter in the world that intrigues me. Being the best in the world is not somebody who stays at a weight and dominates his weight. He’s willing to go to whatever weight. But I’m not overlooking Alex. When you overlook somebody, you lose.”

Volkanovski (20-1) has emerged from Australia as a serious contender for the featherweight title with 17 consecutive wins since 2013, including seven straight in the UFC.

Nunes already beat De Randamie in 2013, back when Nunes was a prominent contender, but not a champion. After a loss to Cat Zingano in her next bout, Nunes began her current nine-fight winning streak against the greatest women’s fighters in MMA history, from Ronda Rousey and Cris “Cyborg” Justino to Holly Holm and Valentina Shevchenko.

Nunes has beaten every female fighter who has ever held a UFC belt at 135 or 145 pounds, but she isn’t bored.

“All the work I’ve put in has paid off, and I will stay here,” Nunes said. “I’ll prove it over and over that I’m the best.”

Usman and Covington will close the show with the champion’s first fight since he dominated Tyron Woodley to take the belt in March. This meeting between two top-shelf wrestlers seems likely to be a tactical fight leading to a decision, but the fighters’ big personalities have generated ample publicity for two less-than-thrilling combatants.

Usman has won 14 straight fights, while Covington has won seven in a row.

Both welterweights have striking similarities in their styles, preferring to pin their opponents against the cage or on the mat and gradually grinding out victories. Although Covington is an eager striker, he doesn’t appear to have as much punching power as Usman, who appears to be bigger and stronger.

The traditional big New Year’s Eve show in the UFC’s hometown has been moved up two weeks in the first year of the promotion’s lucrative deal with ESPN.