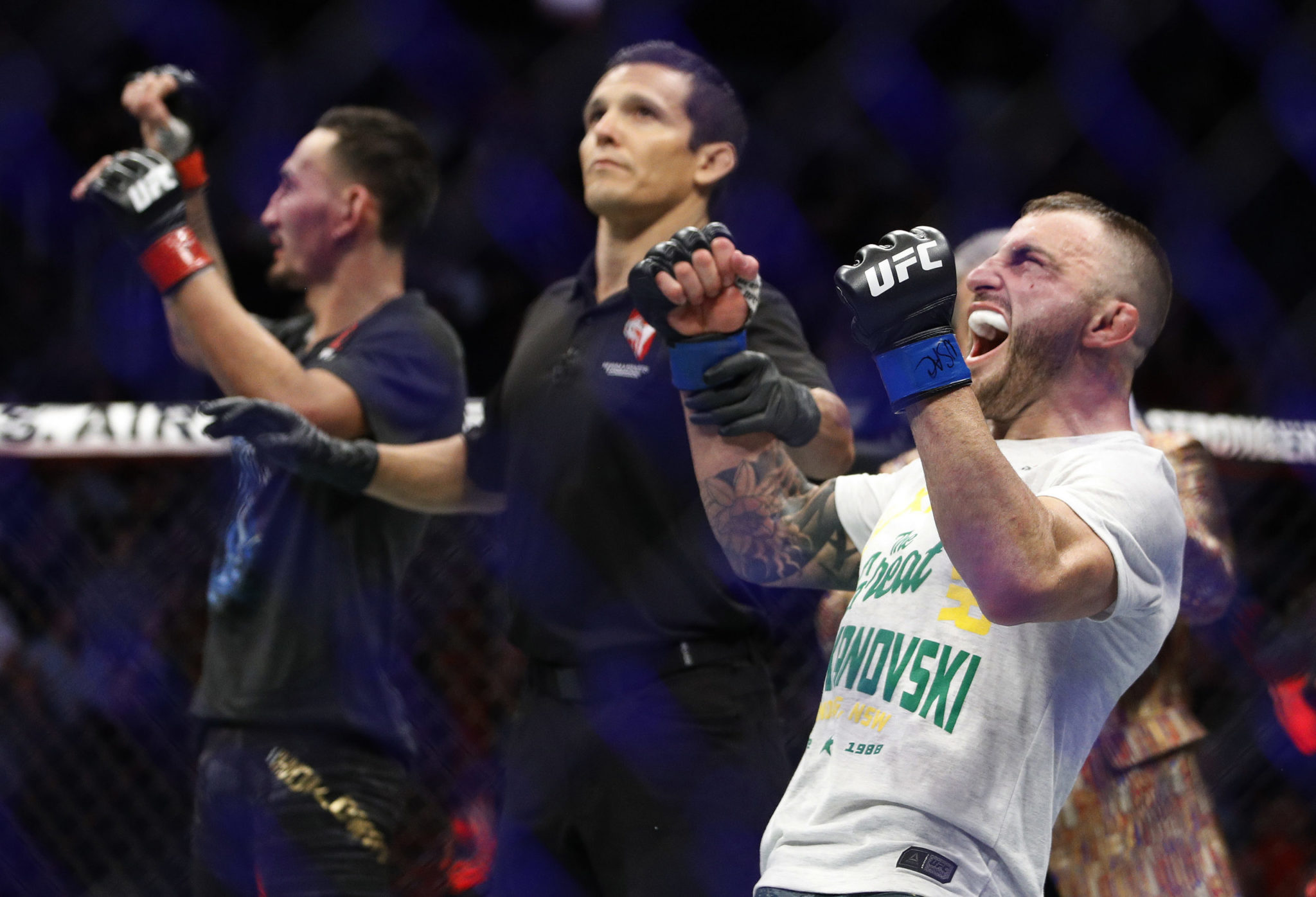 Kamaru Usman brutally stopped Colby Covington with 50 seconds left in the fifth round at UFC 245 on Saturday night, retaining his UFC welterweight title with a spectacular finish to their grudge match.

Usman (16-1) closed out an occasionally slow fight with Covington (15-2) in thrilling fashion, knocking down the challenger twice with precise punches and then finishing him on the ground.

Usman and Covington took a personal animus into the cage, and the Nigerian-born Usman made good on his vow to derail the career of the divisive Covington, whose grating personality and eager embrace of President Donald Trump have made him a sharply polarizing figure in mixed martial arts.


“This one is not just for me,” Usman said. “This is for the whole entire world.”

The judges favored Volkanovski 48-47, 48-47 and 50-45. Holloway struggled to land consistent strikes while dodging Volkanovski’s barrage of leg kicks, but the long-reigning champ still appeared surprised and disappointed by the judges’ verdict in just his second loss since 2013.

“It means the world,” Volkanovski said. “I have two kids at home. Everything is about my family. Spending time away from them kills me, but this is for them, a little early Christmas present for them.”

Volkanovski earned his title shot with 17 straight victories, including seven since joining the UFC, capped by a win over Aldo in May.


“Featherweight has always had great, respectful champions who always fight the next contenders in line, and I appreciate that,” Volkanovski said. “There’s a lot of people who have earned their shot and aren’t given it, so I’m going to make sure everyone who earns it, gets it.”

Holloway has been one of the UFC’s most popular and most durable fighters of the 2010s, winning 13 consecutive bouts before he moved up to lightweight and lost a decision to Dustin Poirier for an interim title last April. He returned in July with a featherweight defense over Frankie Edgar before agreeing to a shot for Volkanovski.

Covington and Usman started with two busy rounds of striking in which Covington appeared to be landing more blows, but Covington poked Usman in the eye during the third. Usman responded by bloodying Covington in an impressive third-round flurry, and Covington subsequently told his corner that he thought his jaw was broken.

Usman took control from there, gradually finishing Covington in his first defense of the belt he took from Tyron Woodley earlier this year. Covington (15-2) won an interim title last year, but then missed a full year of competition due to injuries.

Nunes (19-4) earned her 10th straight win and fifth bantamweight title defense over a half-decade of UFC dominance, but the two-division champion had to rely on her wrestling skills to dominate her 135-pound rematch with De Randamie (9-4), the former 145-pound UFC champion.

“My game plan was to go five rounds and work the takedown,” Nunes said. “I almost got two submissions, but I made some mistakes and I have to fix that. Just a little bit of the technique was off, but I will fix it and next time I will get it.”


After Nunes nearly finished in a one-sided first round, De Randamie surprised Nunes with several effective strikes in the second. Nunes wisely landed multiple takedowns to control the rest of the bout, keeping De Randamie on the mat and unable to land a home-run strike.

Nunes added the featherweight belt last December with her 51-second thrashing of Cris “Cyborg” Justino, cementing her place among the sport’s greats. Still only 31 years old, Nunes has said she will defend that 145-pound belt in her next fight, which would make her the first UFC fighter to defend two titles simultaneously.

De Randamie was the first UFC women’s featherweight champion in 2017, but she moved down to bantamweight after she was stripped of the belt. The Dutch kickboxer was stopped by Nunes in the first round of their first meeting in 2013, but she tested Nunes much more extensively this time out.

Earlier on the pay-per-view portion of the show, Aldo (28-6) lost a split decision to fellow Brazilian contender Marlon Moraes (23-6-1).

Russian bantamweight contender Petr Yan stopped Urijah Faber with a single head kick in the third round. Yan (14-1) battered and bloodied the 40-year-old veteran with two knockdowns in the second before finishing Faber and then calling out two-division champ Henry Cejudo afterward.