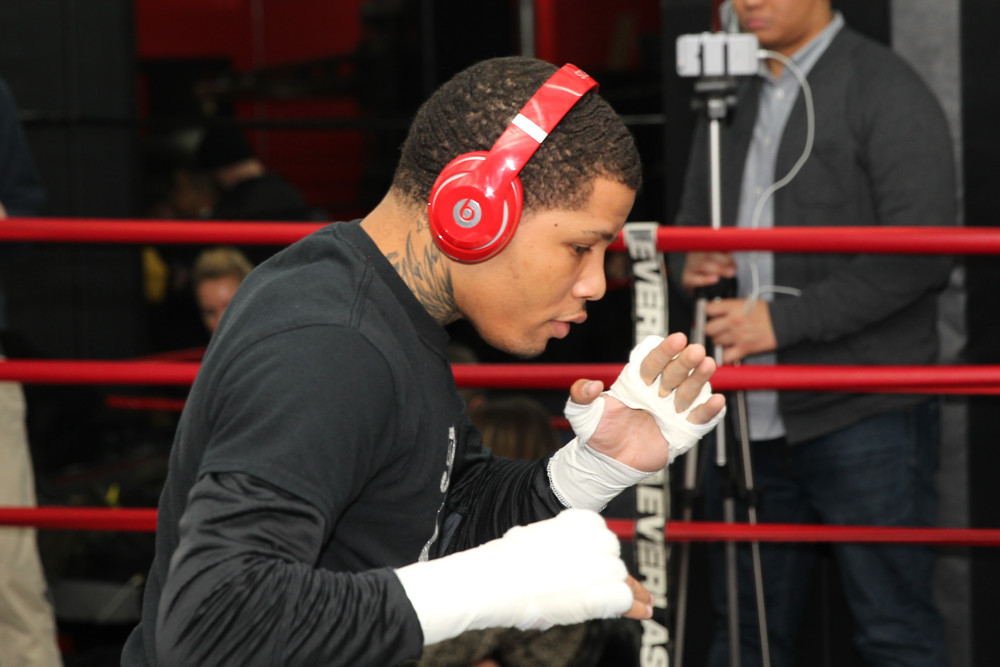 Gervonta Davis stayed unbeaten in his career with a 12th-round stoppage of Yuriorkis Gamboa to win the WBA secondary lightweight title Saturday night.

Fighting past the ninth round for the first time, Davis (23-0, 22 KOs) showed why his nickname is Tank, releasing a barrage of punches in the final round before a left uppercut to the head ended the fight at the 1:44 mark when referee Jack Reiss called it.

Davis, becoming a two-division champion in his adopted hometown, dropped Gamboa three times. He landed a left hand to knock the veteran down in the final seconds of the eighth, bringing fans in the lower bowl at sold-out State Farm arena to their feet.


But Davis, 25, entering his prime and moving up to lightweight for the first time, couldn’t finish off the 38-year-old Gamboa until the end. Gamboa took a beating in the fifth from Davis’ left uppercuts but had plenty of punch resistance.

Atlanta rapper Lil Baby performed alongside Davis as he made his entrance for the main event. It didn’t take long for Davis to energize the fans, using a double-jab and a left hand to drop Gamboa at the 1:36 mark of the second.

Davis had a big lead on the cards at the time of the stoppage, with judges giving Gamboa only the seventh round.


Davis had a dramatic Friday, getting fined by the Georgia State Athletic Commission for missing weight when he tipped the scales at 136.2 and taking the two extra hours he needed to make 134 3/4. He also shoved Gamboa at the faceoff, setting off a ruckus on the stage, though both boxers quickly departed.

Davis’ next fight is undecided. Super lightweight champion Vasyl Lomachenko of Ukraine said in April that he wants a match, and Davis said last month that he’s ready, too. But a more likely possibility is Davis returning to featherweight to face Mexico’s Léo Santa Cruz.

Davis’ handlers have cautiously laid out his career, and Gamboa, a former unified featherweight champion and 2004 Olympic gold medalist at flyweight, was one of Davis’ toughest matchups to date despite being past his prime.

The approach has worked to help Davis stay unbeaten and build his brand. Davis has had one fight last into the ninth, in his 14th bout against Luis Sanchez of Mexico four years ago.

Davis’ past three fights lasted no longer than three rounds. His TKO of Jesús Cuellar in the third in April 2018 won Davis the WBA super featherweight title. His next fight, 11 months ago against Mexico’s Hugo Ruiz, a late replacement, marked his eighth career first-round knockout and his first as a card headliner.


And in July before a capacity crowd in his hometown of Baltimore, Davis finished off Ricardo Núñez of Panama in two rounds with a TKO.

Gamboa, whom Davis described as his toughest opponent since his seventh-round TKO of Puerto Rico’s José Pedraza for his first world title nearly three years ago, had won four straight since failing to come out for the eighth round in 2017 against Robinson Castellanos.

Jack used a couple of rights in the opening seconds of the 12th to knock down Pascal for the second time in his career. Pascal staggered to his knees and into the ropes, but quickly stood up, and the final cards read 114-112 for Jack and two 114-112s for Pascal.

In the closing seconds of the fourth, Pascal used an overhand right to knock down Jack for the fourth time in his career. It was dicey for Pascal in the eighth, getting knocked sideways into the ropes with a combination, but he came back with a flurry before the bell.

In a super middleweight match on the undercard, Lionell Thompson won his debut at 168 pounds, upsetting Mexico’s José Uzcátegui in a unanimous decision as one judge scored it 95-94 and the two others 96-92. Thompson (22-5) dropped Uzcátegui (29-4) with a right hand in the closing seconds of the first. Thompson overcame a cut over his right eye in the third and getting docked one point in the fourth for holding.