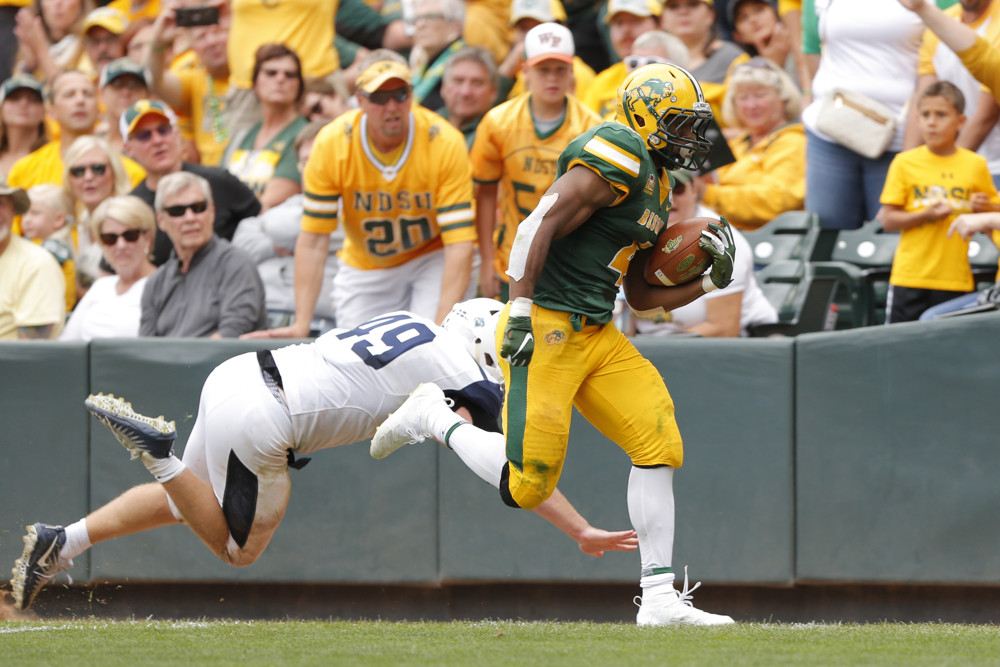 Coupled with South Dakota State’s unexpected early struggle against upset-minded Southern Illinois (2-3) in Brookings last weekend — a game in which the Salukis led at halftime — North Dakota State’s completely dominating 37-3 performance at Illinois State on Saturday has propelled the defending national champions into our top spot in Week 6 of the Football Championship Subdivision.

Undefeated Yale became the third Ivy League team to appear in our Top 25 this season, joining Dartmouth and Princeton, both of whom were previously ranked, while the Fighting Hawks of the University of North Dakota (3-2) — a stunning 38-36 winner against high-powered UC Davis this past weekend — enters our national rankings for the first time this season.

Here are this week’s national rankings:

The Bison, winners of seven of the previous eight FCS national championships, appeared in top form in easily annihilating a pretty solid Illinois State team that had won three straight games heading into their Missouri Valley Football Conference (MVFC) opener this past weekend.  North Dakota State, which has now won 26 consecutive games — seven short of matching its all-time FCS record of 33 — completely dominated the Redbirds from the opening kick-off, suffocating nationally-ranked ISU after it scored its only points on a field-goal late in the first quarter.  The Bison limited Illinois State to 200 total yards in the lopsided contest while racking up 482 yards of their own.  NDSU, which has now prevailed against such formidable FCS opponents as Delaware, UC Davis and Illinois State, hosts Northern Iowa (3-2) on Saturday in its homecoming game.  The Bison, who have the last five games in this longtime series dating back to 1938, scored four touchdowns in the fourth quarter in defeating Northern Iowa 56-31 last year in Cedar Falls.  It was the most points ever scored by a visiting team in the UNI Dome.

South Dakota State, which struggled a bit against Southern Illinois at Dana J. Dykhouse Stadium in Brookings, S.D., on Saturday, dropped out of our top spot for the first time this season.  The Jackrabbits, our preseason favorite, face a dangerous Youngstown State (4-1) squad on the road in what is shaping up as one of the most interesting FCS matchups this weekend — a game which will tell us a lot about how the Missouri Valley Football Conference is going to shape up heading into the homestretch.  Bo Pelini’s Penguins, suffering their first and only loss this season, nearly defeated Northern Iowa on the road this past Saturday, losing to the Panthers 21-14.

JMU remains in our third spot following a hard-fought 45-38 overtime victory on the road against stubborn Stony Brook — ending the host’s twelve-game home winning streak.  Redshirt junior Jawon Hamilton, a 5-8, 195-pound running back from Miami, rushed for a career-high 105 yards and scored a pair of touchdowns for James Madison in that thriller.  The Dukes, whose only loss this season came at the hands of FBS West Virginia in their season opener, return home to play undefeated Villanova (6-0) on Saturday in a must-see game.

The Wildcats, who opened Big Sky Conference play with a 41-35 win at Idaho on Saturday, return home to play Southern Utah (1-5) on Homecoming Day in Ogden this weekend.

The Griz continue to impress.  Routing visiting Idaho State 59-20 in pouring rain this past weekend, Montana has a bye this weekend before playing at Sacramento State on Oct. 19.

Northern Iowa smothered Youngstown State’s rushing attack, limiting the Penguins to 55 yards on the ground, while defeating their visitors 21-14 this past weekend.  The Panthers now face the unenviable task of playing No. 1 North Dakota State at the Fargo Dome on Saturday.

Following a season opening loss at Texas Tech, the Bobcats have been unbeatable, but received something of a scare in a narrow 34-28 overtime victory against Cal Poly in San Luis Obispo this past weekend.  The Bobcats host a dangerous Sacramento State (3-2) squad in their homecoming game on Saturday.

Arguably the biggest surprise in the Football Championship Subdivision this season, Villanova remained undefeated with a 35-28 win at William & Mary this past weekend.  The Wildcats, who converted a couple of gutsy fourth downs in its winning final drive against the Tribe, travel to Harrisonburg, Va., take on highly-ranked James Madison on Saturday in a game that could ultimately decide the Colonial Athletic Association championship.

The Owls, who had a bye week, host Charleston Southern (1-4) in a Big South matchup on Saturday.

The Paladins, whose only two losses have come at the hands of FBS opponents — and narrowly, at that — smashed Samford 58-14 in Birmingham on Saturday, have a week off before facing The Citadel.  Furman and Chattanooga are the only two remaining unbeaten teams in Southern Conference play.

Playing at home for the first time this season, the Colonels looked impressive in a 34-14 win over Central Arkansas.  The victory snapped an eight-game losing streak to UCA.  Nicholls State hosts lowly Northwestern State (0-5) in a Southland Conference matchup in Thibodaux on Saturday.  It should be a blowout.  Nicholls, which is 2-0 in conference play, and Sam Houston State, which has won all three of its conference games, are the only remaining undefeated teams in the conference.

Suffering its first loss of the season in a 21-14 loss at Northern Iowa, look for resurgent YSU — a team that struggled to win four games a year ago — to give second-ranked South Dakota State everything it can handle this weekend.

The Blue Hens, who had a week off after nearly knocking off Pitt on Sept. 28th, play at Elon (2-4) in an important Colonial Athletic Association contest on Saturday.  Delaware is one of only four unbeaten teams in conference play.  Villanova, James Madison and New Hampshire are the other undefeated teams in the CAA.

The Tom Flacco-led Tigers, who had a week off after losing to the highly-touted Florida Gators in “The Swamp” in late September, host Albany (3-3) in an important conference game this weekend.  Greg Gattuso’s Great Danes had won two games in a row, routing Lafayette 36-7 and downing William & Mary 39-31, before falling 23-20 in a penalty-plagued effort at Richmond this past weekend.  Albany quarterback Jeff Undercuffler, who should be able to hold his own against the more celebrated Flacco, has thrown eighteen touchdown passes this season.

The Aggies, who find themselves in a three-way tie with Bethune-Cookman and Florida A&M for first place in the MEAC, demolished Norfolk State 58-19 on the road this past weekend. NCA&T has a bye week before hosting Florida A&M on Oct. 19.

The Big Green, who opened Ivy League play with a 28-15 win against Penn at Philadelphia’s Franklin Field on Friday night, host undefeated Yale on Saturday.

Following Saturday’s setback against North Dakota State, the Redbirds are looking to fly high again when they travel to Carbondale to take on Southern Illinois this weekend.

The Tigers, who defeated Columbia 21-10 in their Ivy League opener, have now won thirteen consecutive games.  Princeton hosts winless Lafayette (0-5) of the Patriot League in its final non-conference game on Friday night.

Jacksonville State returned to winning form and back into our national rankings by defeating Tennessee State 31-23 last weekend.  The Gamecocks travel to Charleston, Illinois, to take on Eastern Illinois (0-6) on Saturday.

The Seawolves proved that they can play with anybody in the CAA and, following last weekend’s heartbreaking overtime loss to third-ranked JMU, should be in a fighting mood when they host New Hampshire (3-2) in another hugely important conference game on Saturday.  New Hampshire, which is 2-0 in conference play and only a half-game behind league-leading Villanova, has dropped its last two games against Stony Brook, including suffering a 35-7 drubbing at the hands of the Seawolves last season in Durham, N.H.

The Bearkats, who have won four of their last five games after a season-opening 39-31 loss at FBS New Mexico, host Lamar (3-3) on Saturday.  With a perfect 3-0 conference record, Sam Houston State leads Nicholls State by a half-game in the highly-competitive Southland Conference.

After nearly knocking off FBS Eastern Michigan on Sept. 21, CCSU is poised to battle Duquesne for the Northeast Conference crown following Saturday’s impressive 28-3 victory at Sacred Heart.  The Blue Devils play at Columbia (1-2) in a non-conference game on Saturday before returning to NEC action against Bryant the following week.

With impressive wins against Sam Houston State and UC Davis, both of whom were ranked at the time, the Fighting Hawks break into our Top 25 for the first time this season.  North Dakota, which defeated UC Davis on Brady Leach’s clutch 46-yard field goal with 57 seconds remaining, travels to Pocatello to take on the Big Sky’s Idaho State (2-3) on Saturday.

Making its debut in our national rankings, Yale was an easy 48-24 winner over visiting Fordham last weekend.  It’s the fifth time in eight seasons that the Bulldogs have started 3-0 and they’ll look to make it four in a row when they travel to Hanover, N.H., to take on Dartmouth.  It won’t be easy.  Dartmouth won last year’s encounter, clobbering Yale 41-18.