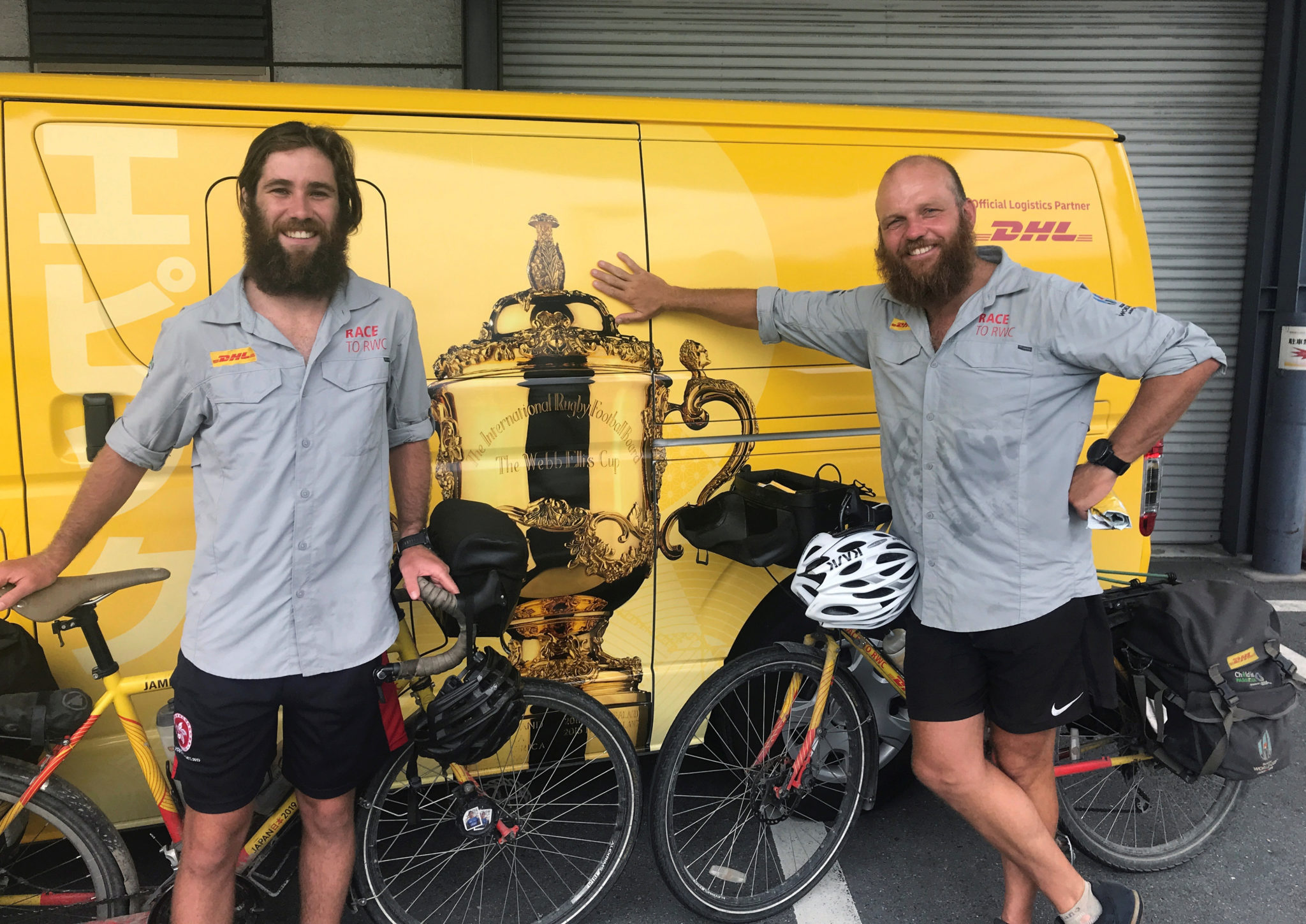 After travelling almost 20,000 km (12,500 miles) across 27 countries since leaving London’s Twickenham Stadium 223 days ago, intrepid cyclists Ron Rutland and James Owens have arrived in Japan and are just a week away from completing their mission.

Since setting off on Feb. 2, the pair have been carrying some very special cargo – the whistle to be used by referee Nigel Owens in the opening match of the Rugby World Cup in Tokyo on Sept. 20.

The whistle has arrived safe and sound in the city of Osaka, with Rutland and Owens preparing for the final 600 km (370 mile) leg of the journey to Tokyo in time for a handover ceremony on Thursday.

As their adventure draws to a close, the pair have mixed feelings.

“It is absolutely surreal to be in Japan,” Rutland told Reuters outside the Osaka headquarters of the parcel delivery company DHL, the main sponsors of their trip.

“There has been some times during this journey that it has been a little touch and go and we had a very tight schedule we had to keep to.”


“Particularly towards the end, I got a little bit sick as well, so the clock started ticking, but we arrived, we hit the ferry when we needed to, arrived in Osaka and there is the small matter of 600 kilometers to Tokyo.”

Although they will stay in Japan for six weeks to enjoy the World Cup, there is a certain sadness their trip is almost over after so many months of the road.

“It is fairly bittersweet to be honest,” said Owens, who was pleased to visit his home city of Hong Kong earlier on the trip.

“Loads to look forward to but there is always at the end of any adventure that sense that I could keep going for a few more months, if not years.”

“I guess that is a sign of how amazing this trip has been.”

Provided they complete the final week of their journey with no problems, Rutland and Owens will have delivered on a promise they made to World Rugby and Japan 2019 organizers seven months ago.

“James and I have been guarding this with our lives,” Rutland said, pointing to the gold whistle to be used during the opener between Japan and Russia.

“It has been with our passports and our credit cards and other vital bits and pieces.”

This is not the first time that Rutland has embarked on an ambitious journey.

In 2015, he cycled alone from his home country South Africa to England for the previous World Cup, where he arrived just in time to see the Springboks’ famous loss to Japan in Brighton.

He was also the caddy to golfer Adam Rolston, who hit a golf ball across Mongolia in 2017, which was made into the movie “The Longest Hole.”

For this ride, he was pleased to team up with Owens, who had spent years working with the charity ChildFund Pass It Back, which is working in partnership with World Rugby and aims to empower under-privileged children across Asia through the game.

“The fact that 223 days later we are still talking with each other, even off-camera, is a sign that it worked out in the end,” said Rutland.