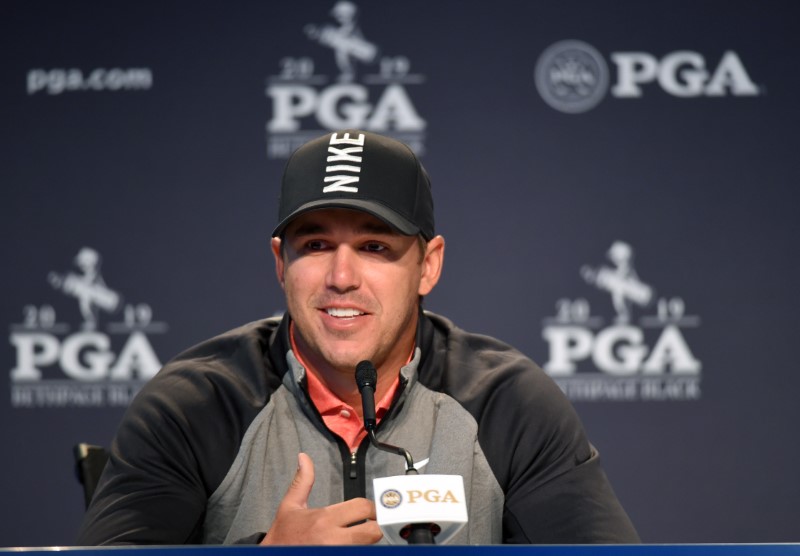 FARMINGDALE, N.Y. – Brooks Koepka has enjoyed plenty of success at the majors in recent years and on Tuesday the PGA Championship holder shed some light on why he feels golf’s blue riband events may just be the “easiest to win”.

Koepka will chase a fourth major title in three years at this week’s PGA Championship and the American world number three has already written off half of the players who will be competing at the Bethpage Black Course.

“There’s 156 in the field, so you figure at least 80 of them I’m just going to beat,” Koepka told a news conference. “From there, the others — you figure about half of them won’t play well from there, so you’re down to about maybe 35.

“And then from 35… (the) pressure is going to get to (some of) them. It only leaves you with a few more, and you’ve just got to beat those guys.”

Having triumphed in three of the last seven majors he has played in, it is not surprising that Koepka, who finished second at last month’s Masters, is oozing confidence this week where he is once again one of the favorites.

Koepka has won just twice on the PGA Tour outside of the majors and conceded that at regular events he would often get ahead of himself and press too hard in the hope of building a cushion, whereas in majors he focuses on staying in the moment.

“I think one of the big things that I’ve learned over the last few years is you don’t need to win it, you don’t have to try to go win it,” said Koepka.

“Just hang around. If you hang around, good things are going to happen.”

The 29-year-old will play the first two rounds of the PGA Championship on Thursday and Friday alongside Masters champion Tiger Woods and British Open champion Francesco Molinari.

So confident is Koepka, who will aim to become the first repeat winner of the PGA Championship since Woods accomplished the feat in 2007, that he feels reaching double figures when it comes to his career tally of major titles is very possible.

“You keep doing what you’re supposed to do, you play good, you peak at the right times. Like I said, I think sometimes the majors are the easiest ones to win,” said Koepka.

“Half the people shoot themselves out of it, and mentally I know I can beat most of them, and then from there it’s those guys left, who’s going to play good and who can win.

“I don’t see any reason it can’t get to double digits.”