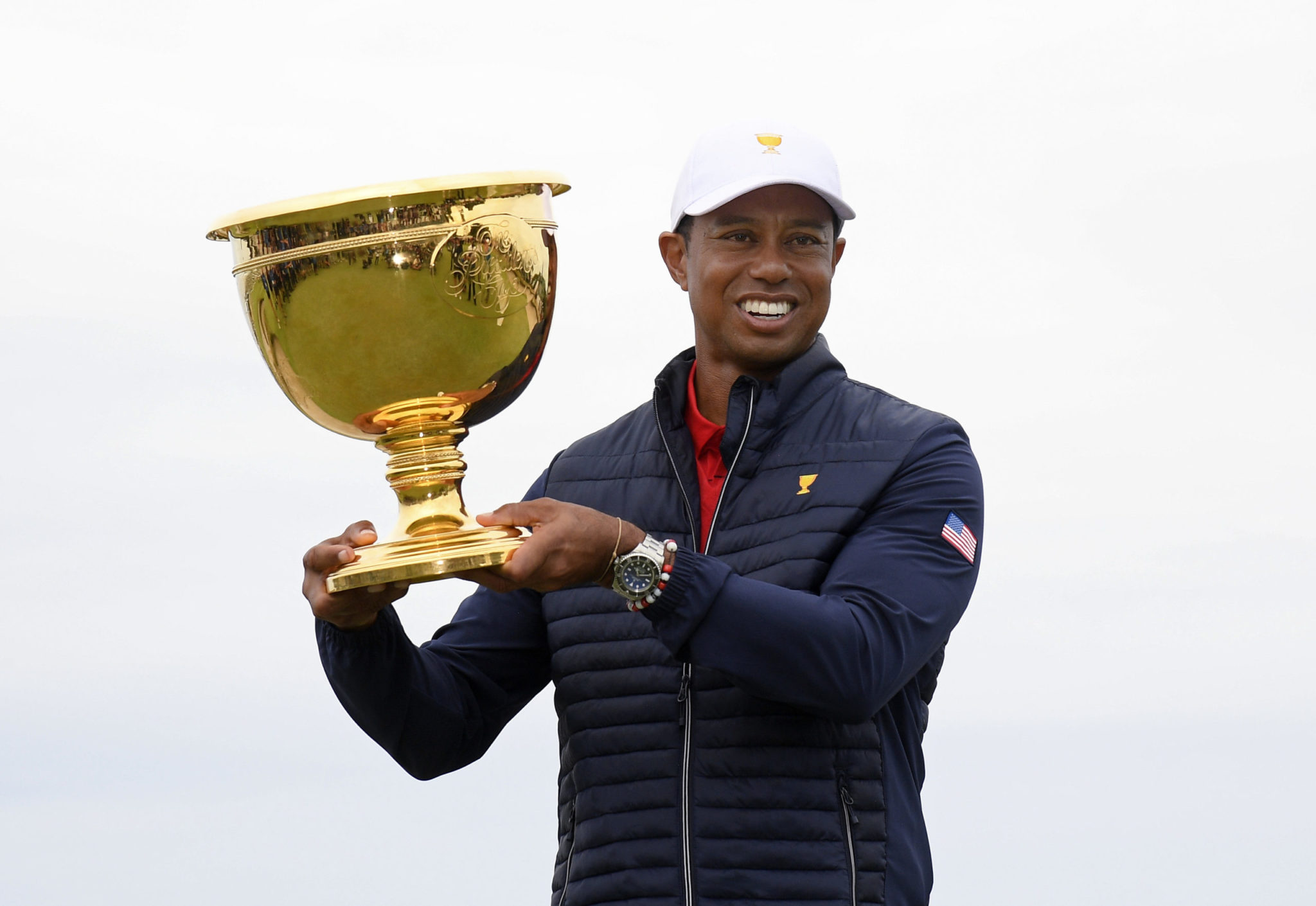 The emotions poured out of Tiger Woods, just like they did at Augusta National in the spring, except this felt different.

The Masters was for him.

This was for 11 players — at times his teammates, always under his captaincy — who delivered another American victory in the Presidents Cup and a moment that nearly brought Woods to tears. And when the decisive point was on the board Sunday at Royal Melbourne, Woods celebrated with everyone he could find by hugging them hard enough to take the breath out of them.

“Any time you have moments where you’re able to do something that is bigger than us as an individual, it’s so much more meaningful and so much more special,” he said.

The Americans felt the same way.


Trailing for the first time in 16 years, they followed his lead. Woods, the first playing captain in 25 years, went out in the first of 12 singles matches and outlasted Abraham Ancer to set the Presidents Cup record by winning his 27th match.

It also set the tone for his team.

Patrick Reed, winless in three matches and heckled so badly for his rules violation last week in the Bahamas that his caddie shoved a spectator and was kept from working the final day, was 6 up through seven holes. Dustin Johnson, playing for the first time since the Tour Championship because of knee surgery, was 4 up through seven holes.

Perhaps most inspiring was Tony Finau in the second match. He was 4 down to Hideki Matsuyama through 10 holes when Finau won the next four and earned a half-point that put even more pressure on the International team.

Matt Kuchar delivered the winning point without even winning his match. His 5-foot birdie putt on the 17th hole assured the Americans the half-point they needed to win for the eighth straight time.

The last two matches ended in halves for a 16-14 score. The Americans tied a Presidents Cup record with an 8-4 margin in singles, the largest since the first event in 1994.

“It was really cool being part of this team and having Tiger as captain,” Kuchar said. “We had a roomful of some of the greatest golfers in the world, and when he speaks, we listen. I think all of us will look back and have these pictures hanging on our walls and say, ‘We played for and alongside Tiger Woods, the greatest player ever.’ It was awesome.”

It was crushing for the Internationals, hoping to end two decades without a victory.


Ernie Els, who has finished second to Woods more times than anyone in golf, assembled the youngest International team ever and inspired them with equal doses of purpose and analytics. It had the lead going into Sunday for the first time since 2003, the tie in South Africa.

It just didn’t have enough to cross the line.

“I followed a plan, and it didn’t quite work out, but we came damn close,” Els said. “If you compare our team on paper with other teams in other sport, you would have laughed us out of the building. But we gave it a hell of a go and we came mightily close to winning and upsetting one of the greatest golf teams of all time.”

That team included the greatest player of his generation. Woods was appointed captain in March 2018 and suggested he might be a playing captain, which he later said was a joke.

And then he won the Masters, his 15th major and first in 11 years, to cap off a comeback from injury made even more meaningful by the hugs he shared with family and those who never left his side.

Two weeks before he filled out his team with four captain’s picks, Woods won in Japan for his 82nd career victory, leaving him no choice but to be the first captain to pick himself.

He was the only player to go undefeated at Royal Melbourne, winning twice with Justin Thomas and on his own ball against Ancer, one of seven rookies for the Internationals.

“We were very inspired to play for Tiger — with Tiger — and it’s so satisfying to win this cup because of that,” Finau said.

Emotions were raw on the golf course as the Americans celebrated their first comeback since the four-point deficit at Brookline in the 1999 Ryder Cup.

In his TV interview, Woods was fighting back tears, yet another indication to his players how much it meant.

“I love seeing other people cry, especially Tiger Woods,” said Steve Stricker, one of three vice captains who allowed Woods to hold dual roles at Royal Melbourne. And then Stricker had to hold back tears of his own.


The International team at least kept it close, unlike two years ago at Liberty National when it was one putt away from being eliminated on Saturday.

Even with so much American red on the scoreboards, the Internationals still had a chance in the final hour. Matsuyama lost a 1-up lead with a three-putt from 25 feet that led to the halve with Finau. Adam Hadwin had a 15-foot birdie putt to beat Bryson DeChambeau on the 18th hole, but had to settle for a halve when he missed on the high side.

Louis Oosthuizen lost a 3-up lead at the turn against Kuchar, who caught up on the 15th hole and set off the celebration two holes later. Their matched ended in a halve.

At the closing ceremony, the Internationals stood with their arms crossed. The frustration was evident, even among the seven rookies.

The Americans now lead the series 11-1-1, the only International victory coming at Royal Melbourne in 1998.

“I’m disappointed. That’s all I can say,” said Adam Scott, who has played nine straight Presidents Cups without winning. “But I like what’s happening in the future. I can’t wait for another crack at it.”

The Internationals likely will want Els to return as captain. As for Woods?