Grimes’ big 1st half helps Houston get past Georgia Tech 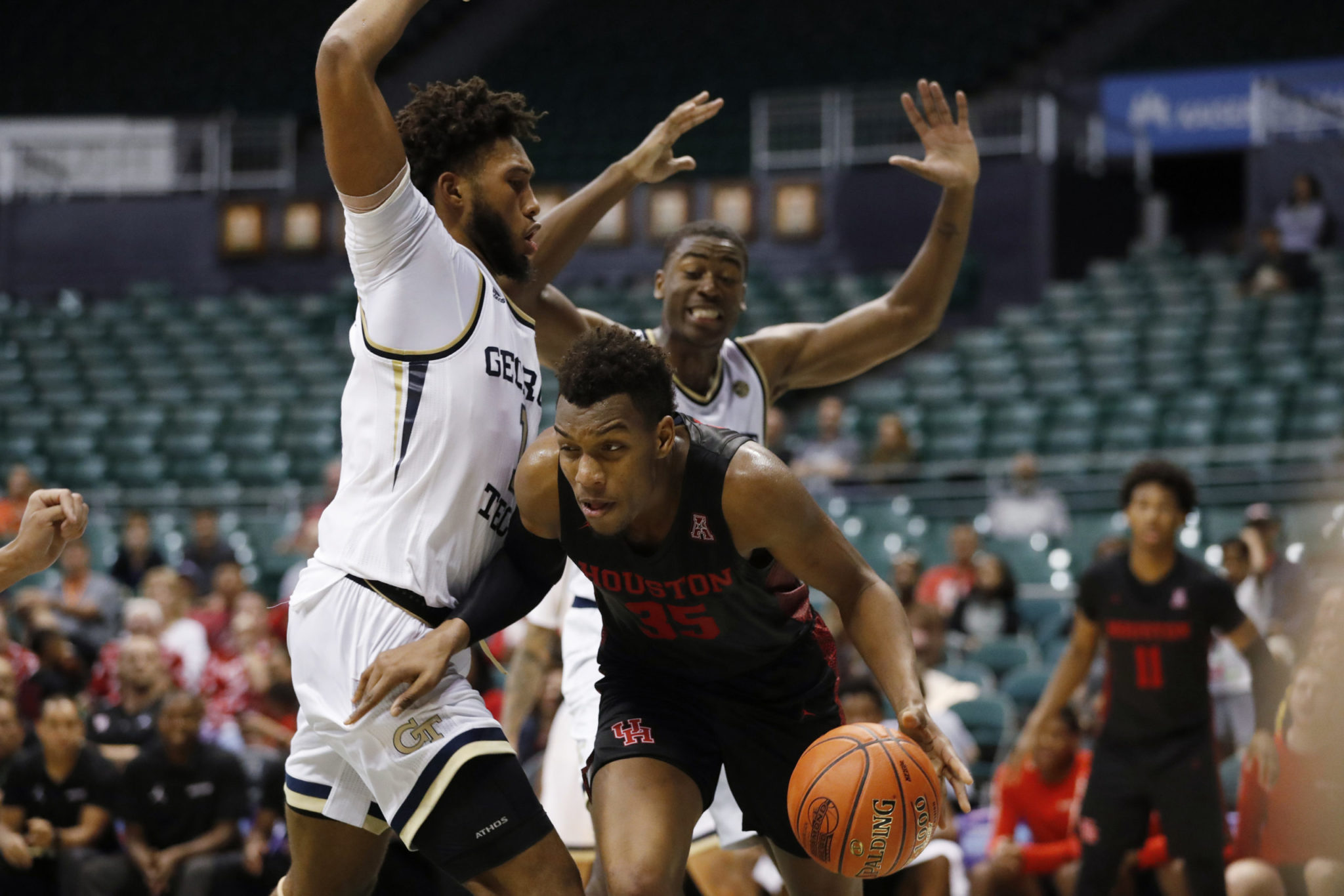 Quentin Grimes scored 23 of his game-high 26 points before halftime and Houston fended off Georgia Tech 70-59 in a Diamond Head Classic semifinal Monday.

The Cougars (9-3) never trailed and led by as many as 13 points in claiming their seventh win in eight games, including their last three.

Grimes shot 10 of 11 from the field in the first half and was 10 of 15 for the game. He finished five points shy of his tying career-high of 31 points, which he set earlier this season in a win over Rice.

“Monster,” Houston coach Kelvin Sampson said of Grimes’ first half. “And then Georgia Tech made a nice adjustment with their big guy, instead of putting him in the middle of their 1-3-1 (zone), they put him on the baseline, so instead of attacking at the rim we’re attacking the corners, because he couldn’t get out to the corners (but) our guys made those shots.”


Fabian White Jr. recorded his first double-double of the season with 15 points and 12 rebounds for Houston.

Georgia Tech got within 56-51 on a pair of Jose Alvarado free throws with 4:24 left to play. However, the Cougars answered with a 7-0 run that included a Nate Hinton three-point play to separate.

Georgia Tech finished 10th in the ACC last year, its highest finish since tying for ninth in 2013, and was picked to finish 12th in the preseason poll. After a 4-2 start to the season, it dropped three straight before getting back into the win column with Sunday’s 74-60 win over Boise State.

Georgia Tech coach Josh Pastner pointed to a 13-4 Houston run near the end of the first half as a key sequence in the game. The Yellow Jackets had cut the Cougars’ lead to 30-26 on Usher’s 12-foot jumper with 3:32 left until the break. However, DeJon Jarreau hit back-to-back runners and Grimes scored nine straight Houston points to stretch it back to a 43-30 advantage.

“That’s when Houston got some separation,” Pastner said. “They hit some tough shots in some key times. We defended for the most part, other than that stretch in the last four minutes of the first half, but I was proud of our guys. We’ve gotten better and we will continue to get better.”

It was Houston’s first win over Georgia Tech in four tries. … The teams last met on March 16, 2016 in the first round of the NIT, which resulted in an 81-62 win for the Yellow Jackets. … They also met in Honolulu in 1988, when Georgia Tech came away with an 87-78 win in the opening round of the Rainbow Classic.

Houston: Will play the winner of No. 22 Washington and Hawaii for the tournament championship on Wednesday.

Georgia Tech: Will try for third place when it meets the Washington-Hawaii loser Wednesday.