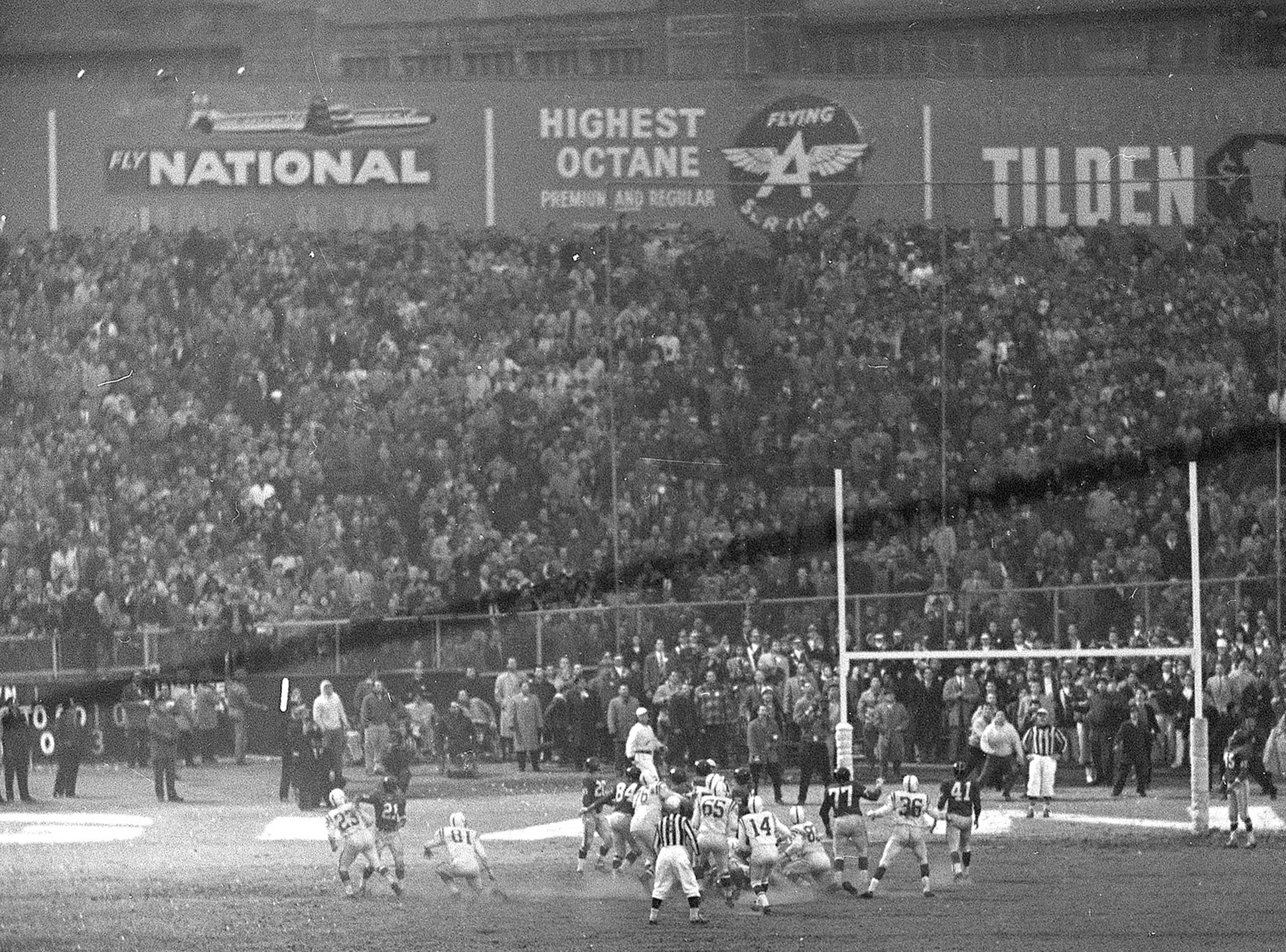 “The Greatest Game Ever Played” is, well, exactly that.

The Baltimore Colts’ 23-17 victory over the New York Giants for the 1958 NFL championship, the first overtime game in league history, was voted the best game as part of the NFL’s celebration of its 100th season. A nationwide panel of 66 media members chose the classic over the 1981 NFC title match featuring the Joe Montana pass to Dwight Clark known as “The Catch,” and the “Ice Bowl” in Green Bay for the 1967 league title.

Baltimore’s win on Alan “The Horse” Ameche’s 1-yard touchdown run served as a catalyst for NFL popularity. The sport generally ranked behind baseball, boxing and college football back then, with even horse racing getting as much attention. But America was entranced by the drama and the stars such as John Unitas, Frank Gifford, Sam Huff, and Gino Marchetti — who broke his leg early in the game. In all, 17 future Hall of Famers participated.


“It was New York that did it,” said Colts running back Lenny Moore, one of those Hall of Famers. “If it had been Baltimore against … maybe Cleveland … most people wouldn’t have noticed, certainly not Madison Avenue or the media.”

But Americans did notice, a true turning point for the NFL.

“Pete Rozelle always told me that the reason pro football took off was because that happened just at that time, in that season, and it happened in New York,” Giants owner Wellington Mara once said.

There was even some confusion among fans and, yes, players at Yankee Stadium, plus those watching on TV, what would happen after Steve Myhra’s 20-yard field goal tied it. No postseason game had ever been tied after regulation.

New York won the coin toss for overtime, couldn’t move the ball, and Unitas guided the Colts 80 yards on 13 plays to Ameche’s conclusion to the NFL’s greatest game.

“I can’t judge for anyone else,” said Ameche, whose nickname emanated from his willing to practice, “but it’s the greatest game I ever played in.”

The greatness of the event was not particularly marred by the sloppiness on the field. There were six lost fumbles, and Colts coach Weeb Ewbank — the only man to lead NFL and AFL championship teams — shackled Unitas for most of the OT drive.


But the status of a game some media called “an epic” never has diminished, and in the midst of the league hitting the century mark, it has been deemed No. 1 amongst all.

It received 18 first-place votes, by far the most in the balloting. Next best for top votes was the Patriots’ rally from 28-3 to beat the Falcons in the 2017 Super Bowl, which got 10 and finished ninth overall. The Ice Bowl got eight first-place selections.

“If you’re going to point to one game that gave the NFL momentum to accomplish some of the things that the league has been able to do,” said Pete Rozelle, then the GM of the Rams and generally considered the best commissioner in pro sports history, “it would have to be the 1958 championship game.”