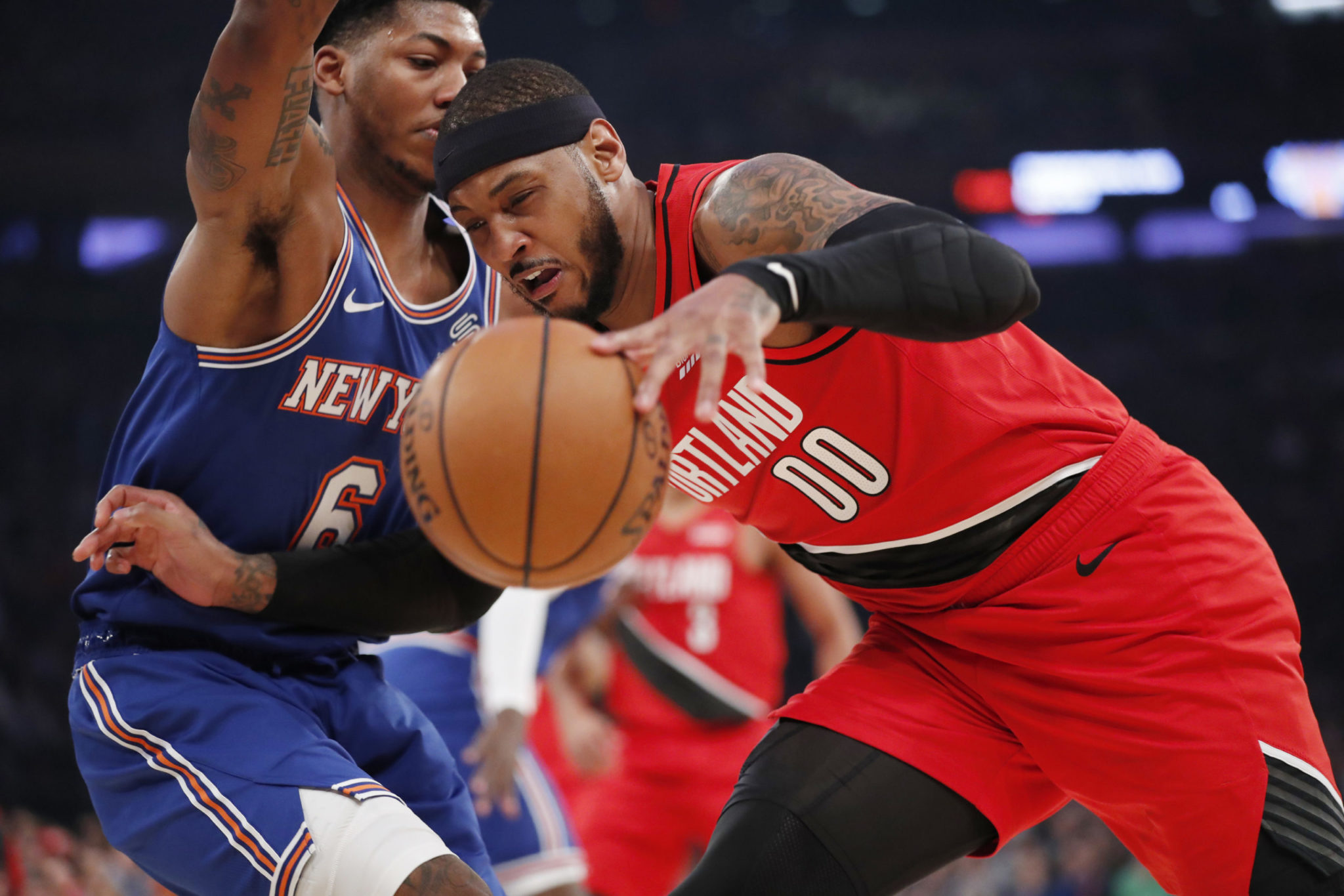 The shots were falling. The crowd was roaring. Everything was set up for this to be Carmelo Anthony’s night.

Then he sat down to start the fourth quarter, and the Knicks had ruined those hopes by the time he got back up.

Mitchell Robinson made all 11 shots and had 22 points, Julius Randle added 22 points and 13 rebounds, and New York spoiled Anthony’s strong return to Madison Square Garden by beating the Portland Trail Blazers 117-93 on Wednesday for its season-high third straight victory.

Anthony scored 26 points, his most since returning to the NBA in November after a year absence, and was cheered before and during the game at the arena where he played 6 1/2 seasons. But he was on the bench at the start of the Knicks’ 14-0 run early in the fourth quarter that broke open the game and sent the Trail Blazers to their fifth straight loss.


“Overall, the experience and just being back today I think is the most important thing,” Anthony said. “The loss is something that we’ll get to the bottom of. We’ll figure it out. It happens. You have to take your hat off to those guys, they played extremely well tonight. The way that they shot the ball, the way that they were locked in, they deserved to win tonight.”

Reggie Bullock made two 3-pointers during the spurt and scored 11 points in his Knicks debut. He signed with the team during the summer but hadn’t played because of a herniated disk.

“It’s just great to be back out there seeing the ball go through the hoop and playing out there with my teammates,” Bullock said. “I signed here for a reason, and I knew what the guys that we signed were capable of doing. I’m glad to be out there playing with them.”

Damian Lillard was held to 11 points on 5-for-20 shooting after scoring 30 or more in the previous three games. The All-Star guard did have 10 rebounds and eight assists, but missed his first six 3-pointers before making his only one of the game.

That was on the final shot of the third quarter, cutting New York’s lead to 83-77, and he then joined Anthony on the bench. The Blazers were still down just six after consecutive baskets by CJ McCollum, but Bullock made his two 3s and Frank Ntilikina and Bobby Portis hit one apiece in between. Portis then finished the run with two free throws to push the lead to 101-81.

Anthony, who shot 4 for 16 in a loss to Phoenix on Monday, and Lillard returned when the lead reached 12 but by then the Knicks were already rolling.


“Offensively it was good to see Melo have a game, but as I said at the beginning of the fourth quarter, Melo and Dame were out and that’s kind of when they made their run and it got away from us,” Portland coach Terry Stotts said.

Anthony was loudly cheered when he was the last Portland player introduced during starting lineups and many times when he had the ball. But the cheers were soon for Robinson, whose high-flying performance tied the Knicks record for most makes without a miss.

He said he was motivated after his team was beaten badly in practice Tuesday by starting forward Marcus Morris’ squad, who taunted the losers.

“I came in the game (tonight) and just dominated and couldn’t do it without them,” Robinson said.

Trail Blazers: Portland started a five-game road trip and doesn’t play its first home game of 2020 until Jan. 11, when it hosts Milwaukee. … It was Anthony’s 20th career game against the Knicks. He was averaging 27.8 points, his most against any opponent

There was a moment of silence before the game for former NBA Commissioner David Stern, who died Wednesday at 77. Stern grew up a Knicks fan, and current team president Steve Mills previously worked under him at the NBA.

“David Stern was not only one of the greatest commissioners in the history of sports, he was an incredible individual and friend. He was loyal and fair, patient and wise, and made all of us who had the privilege of knowing him better,” Madison Square Garden chairman James Dolan said in a statement. “The NBA will stand forever as a testament to his lasting legacy and all those who worked with him or for him, sat next to him or across the table from him are better because of it.”

Trail Blazers: At the Washington Wizards on Friday night.