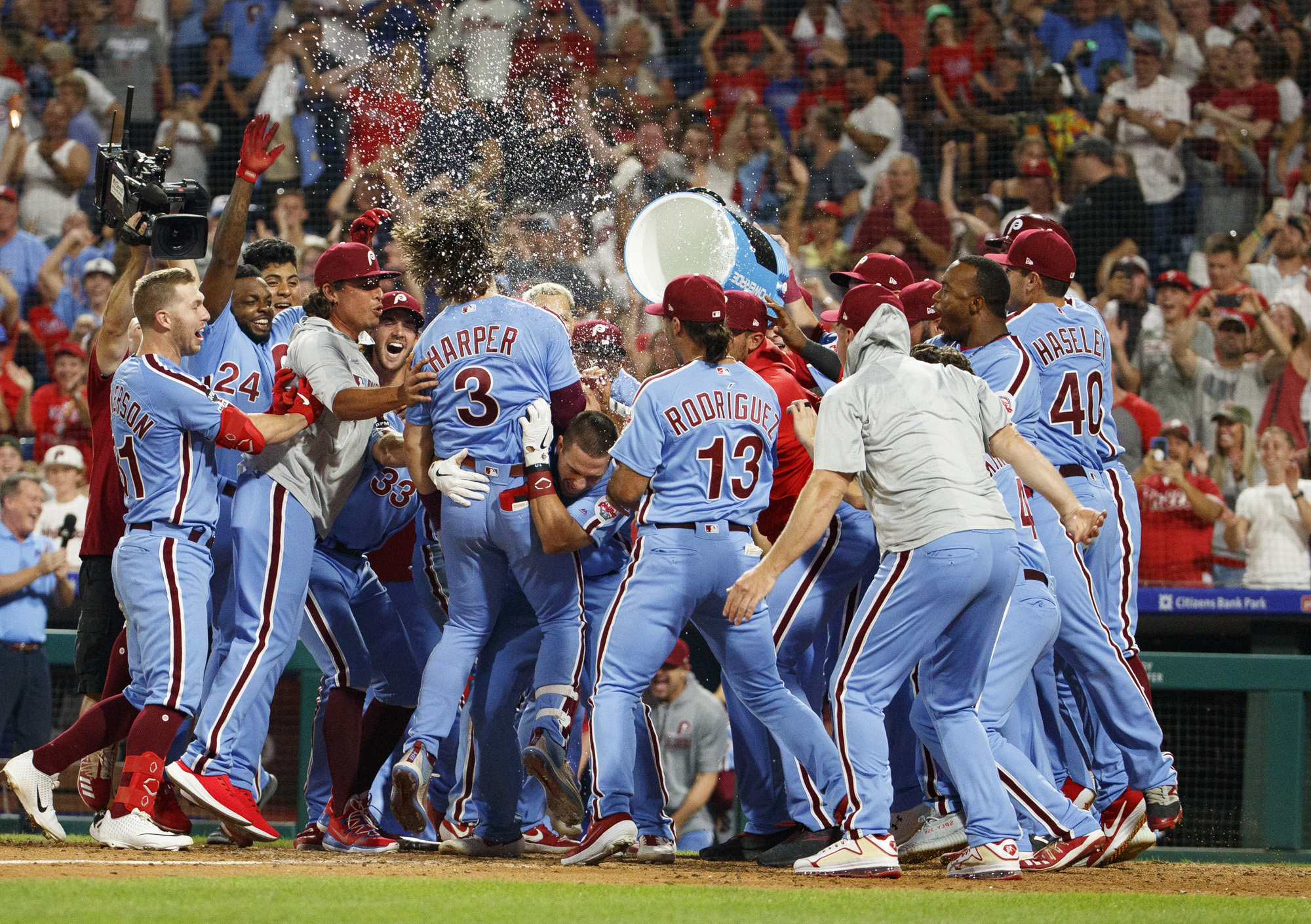 PHILADELPHIA — Bryce Harper knows everyone in the dugout and ballpark expects him to get clutch hits in moments just like this.

Boy, he crushed it.

Harper blasted a grand slam with one out in the ninth inning, capping a six-run rally that sent the Philadelphia Phillies over the Chicago Cubs 7-5 Thursday night for a three-game sweep.

Harper delivered his biggest hit yet in his first season after signing a $330 million, 13-year contract with the Phillies, celebrating while running around the bases and then getting mobbed by teammates at the plate.


“Before I went to the plate, I touched my heart and I was thinking to myself: Why am I not jittery? Why am I not excited? But that’s just how I am,” Harper said. “I go up there and each at-bat is the same. I don’t think about bases loaded. I try to get a pitch I can drive and hopefully good things happen. I love those moments. I love those opportunities. I think it helped me a lot from a young age going through those emotions and having those opportunities at 8, 9, 10 years old in big-time games going to different states and cities playing for a lot of teams.”

“I just love it. It’s a lot of fun. These fans do expect that and I expect to do that for them on a nightly basis and if I don’t, they’ll let me know and I like that, too,” he said.

But the Phillies rallied against Chicago’s bullpen and moved within one game of the Cubs for the second wild-card spot in the NL.

Pinch-hitter Brad Miller chased Rowan Wick with an RBI single in the ninth that cut it to 5-2 and Roman Quinn greeted Pedro Strop with an RBI single to make it a two-run game. Strop (2-5) hit Rhys Hoskins to load the bases with one out.

Derek Holland entered to face Harper and got ahead 0-2 in the count. Harper fouled off a 2-2 pitch before launching his 25th homer way out to right.

“I think everyone who watches baseball expects him to do that every time he’s up,” Phillies starter Drew Smyly said. “He’s fun to watch.”

Harper has seven homers and 15 RBIs in the last 12 games.

Anthony Rizzo, batting leadoff after the original lineup had him in his usual cleanup spot, gave the Cubs a 1-0 lead in the third when he hit his 22nd homer.

Ian Happ led off the fourth with a triple and scored on David Bote’s double. Albert Almora Jr. hit an RBI single with two outs, went to second on the throw home and advanced to third on shortstop Jean Segura’s fielding error. Rizzo’s single made it 4-0.


Kyle Schwarber slammed his 100th career homer and team-high 28th this season into the bushes in center field to put the Cubs ahead 5-0 in the fifth.

Corey Dickerson hit an RBI single with two outs in the eighth off Wick, but right fielder Nicholas Castellanos threw out Hoskins trying to score from second on the play to end the inning.

“Darvish was outstanding but he was done,” Cubs manager Joe Maddon said of lifting his starter.

Smyly gave up five runs in five innings. He has an 8.04 ERA in his last three starts after allowing one run in 13 innings in his first two starts for the team.

The Phillies claimed righty Jared Hughes off waivers from the Reds. Hughes will join the bullpen this weekend. He was 3-4 with one save and a 4.10 ERA for Cincinnati.

CUBS: SS Javier Baez was scratched from the lineup because of an illness. … RHP Craig Kimbrel (right knee inflammation) felt fine after another bullpen session and is closer to returning. … RHP Brandon Kintzler (right pectoral inflammation) is expected to return on Friday. … OF Jason Heyward (left knee inflammation) wasn’t in the lineup for the second straight game but entered the game in the ninth as a defensive replacement.

PHILLIES: RHP Edubray Ramos (shoulder) was moved to the 60-day injury list to make room on the 40-man roster for Hughes.

Cubs: RHP Kyle Hendricks (8-9, 4.38 ERA) faces the Pirates in the start of a three game series that will conclude a 10-game road trip.

Rob Maaddi writes about sports for The Associated Press.