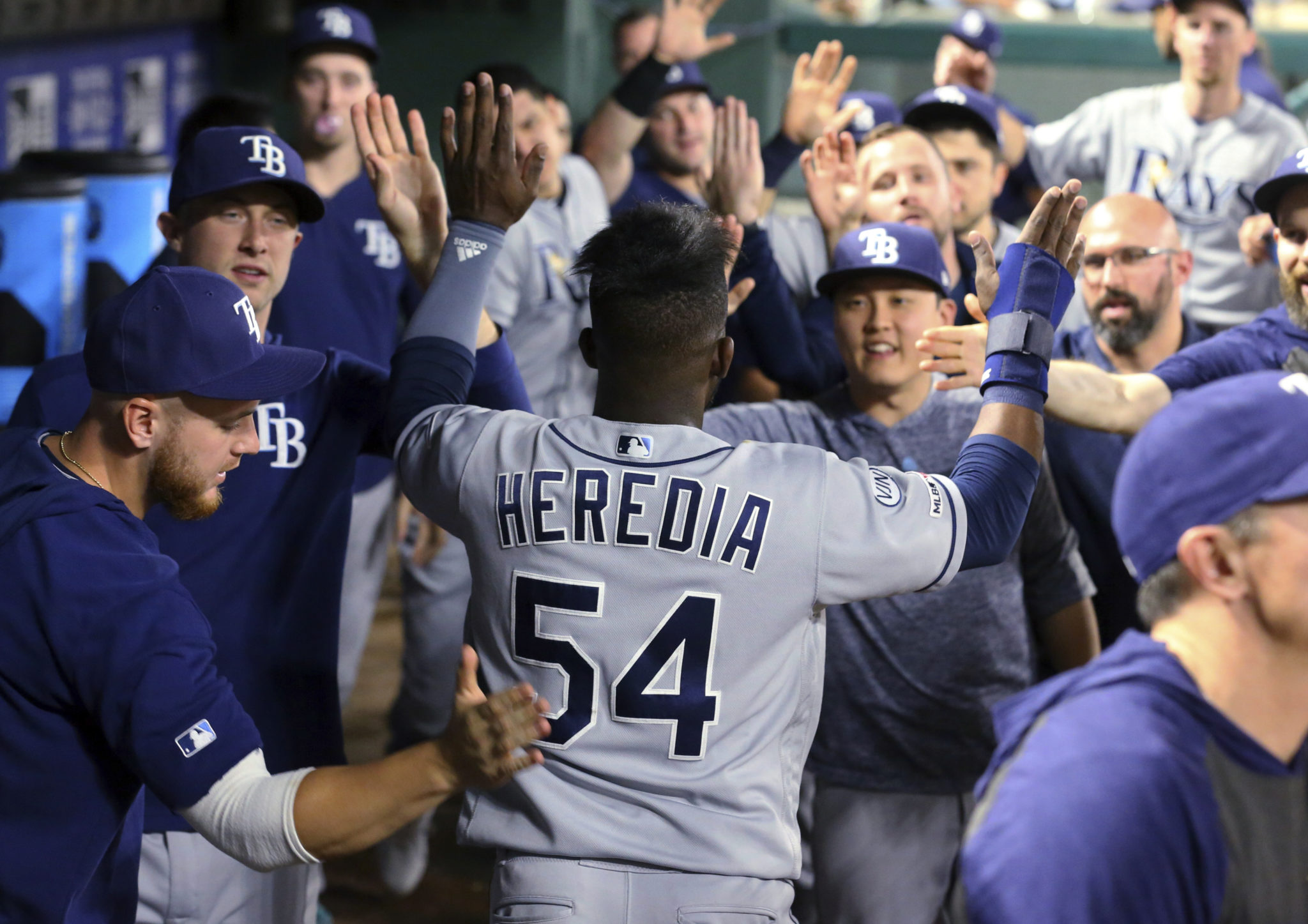 ARLINGTON, Texas — Kean Wong was churning hard to get to first base and keep the Tampa Bay Rays going in the 11th inning when his two-out slow roller was being bobbled by the pitcher.

Only when Wong was safe at first, after Texas Rangers rookie reliever Emmanuel Clase’s desperate throw bounced away from the bag , did he realize the ball had then been thrown into left field, allowing the Rays to score the tiebreaking run.

Austin Meadows tied the game with a two-run homer in the eighth before the Rays (87-59) were helped by the two errors on the same play in the 11th of a 5-3 win Tuesday night. They have won six in a row, and 11 of 12, to stay 1½ games ahead of Oakland for the top AL wild-card spot after the A’s won 21-7 at AL West-leading Houston.


After the errant throw by Clase (2-3), second baseman Rougned Odor picked the ball up and threw it high into left field as a runner was diving back into second base. Nate Lowe scored the tiebreaking run from third, and Guillermo Heredia followed with an RBI single.

“That was kind of a funky play,” Rays manager Kevin Cash said.

“We’ve got guys one through nine that hustle down the baseline, make the pressure plays, put pressure on the defense,” Lowe said.

Joey Wendle led off the Rays eighth with a triple off just-entered reliever Rafael Montero, and Meadows followed with his 29th homer to tie the game at 3-3.

Wendle’s RBI single in the fifth was the only run Tampa Bay got in seven innings off Rangers starter Lance Lynn.

The Rangers, coming off a four-game sweep at Baltimore, had runners at second and third in the ninth after a double steal before Isiah Kiner-Falefa’s inning-ending fly out.


“We did nothing at the end of the game to win the game, and that’s what’s frustrating to me,” Rangers manager Chris Woodward said. “Just little things that we obviously didn’t execute, at the plate, in the field.”

Emilio Pagan (4-2) struck out two in a perfect 10th before Peter Fairbanks worked the 11th for his first career save.

Fairbanks was traded from Texas to Tampa Bay on July 13 for rookie infielder Nick Solak, who hit a two-run homer in the fourth for the Rangers and had a two-out infield single off the pitcher he was traded for in the 11th.

The Rangers didn’t have a base runner against lefty starter Ryan Yarbrough until Shin-Soo Choo was hit by a pitch leading off the fourth. Choo came home an out later when Willie Calhoun lined a double into the left field corner, and Solak followed with his third homer in his 20 games since his big league debut Aug. 20.

Those were the only three runs allowed by Yarbrough, who struck out seven and walked one in seven innings. The lefty hasn’t lost in his last 15 appearance (seven starts) since early June.

Lynn departed with a 3-1 lead and in position for his first win in his last seven starts. He is 0-4 since a win at home Aug. 2 against Detroit for his 14th victory that at the time matched the major league lead. … Rangers batters struck out 13 times, giving them 1,439 for the season and passing Detroit’s 1,437 for the most in the majors.

Rays: CF Kevin Kiermaier thought he would be back in the lineup, but Cash held him out after he left the previous game Sunday with a stiff neck. An MRI showed no issues. … LF Tommy Pham was also out with a forearm/elbow issue. He could return Wednesday, maybe as the DH. … LHP Blake Snell, out since July 22 because of surgery to remove bone chips from his elbow, is scheduled to go two innings or 30 pitches for Triple-A Durham in Game 3 of the International League championship series Thursday. His first rehab start was Saturday in the semifinal series clincher for the Bulls.

Rangers: All-Star slugger Joey Gallo, who last played July 22 before right wrist surgery, took some swings against live pitching. Woodward said Gallo looked fine and felt decent. The hope is that Gallo can play a few games before the end of the season. “He’s had such a good year and he’s made so many strides forward, I’d like to send him off with something positive he did on the field, not out of the training room,” Woodward said.

The Rays will start the middle game of the three-game series with right-handed reliever Andrew Kittredge on the mound. The Rangers opted against using an opener and will let Ariel Jurado start even though he has allowed 27 runs (21 earned) his last 23 2/3 innings.