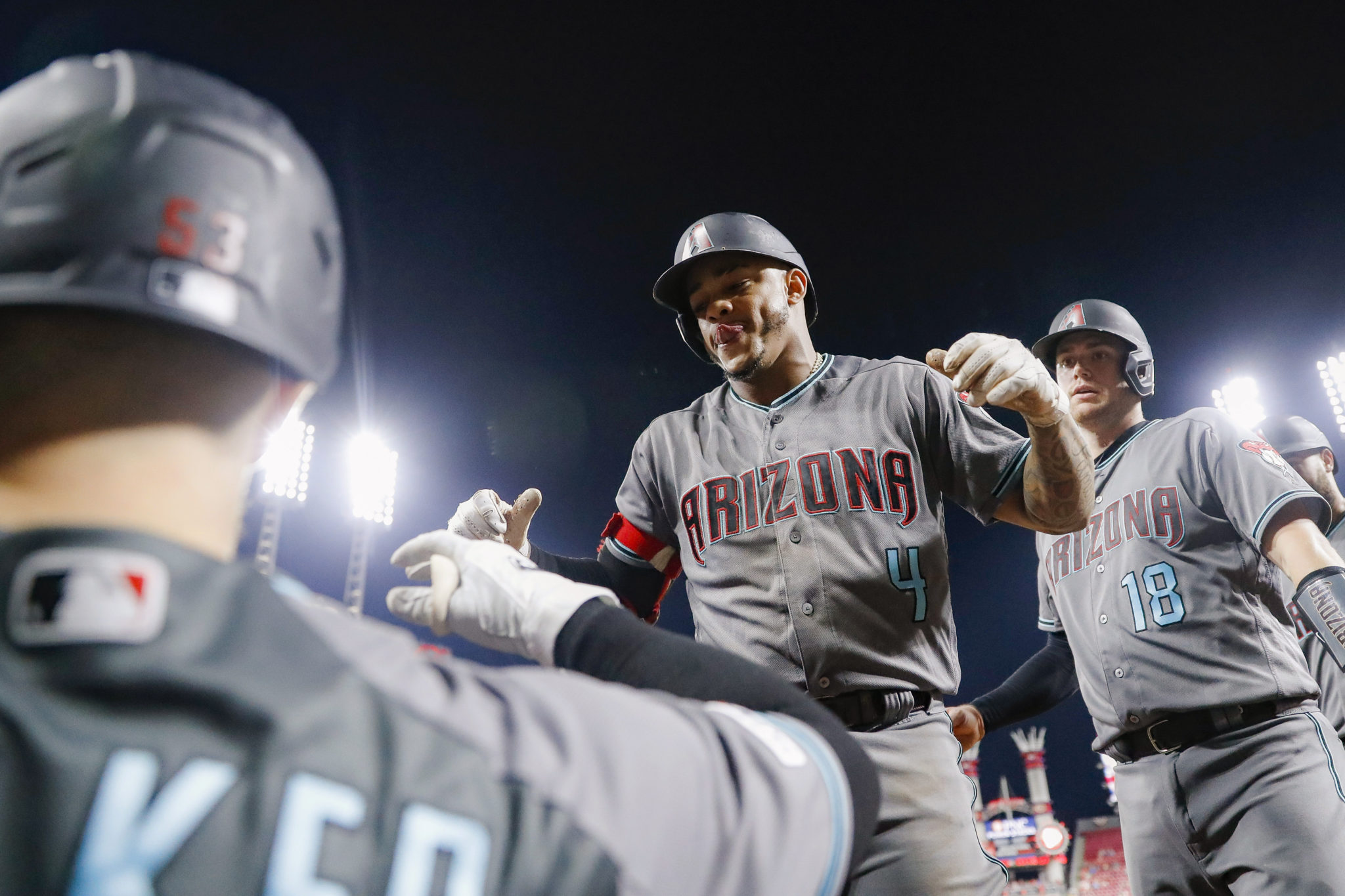 CINCINNATI — The Arizona Diamondbacks watched closer Archie Bradley escape a bases-loaded threat, and then saw they had gained more ground in their unexpected playoff chase.

September has been a fun month for a team that seemed out of it in July.

Ketel Marte hit a three-run homer , Josh Rojas singled home two more, and the Diamondbacks escaped one last threat to close out a 7-5 victory over the Cincinnati Reds on Friday night in the opening game of an enormous road trip.

“That’s the beauty of this game,” manager Torey Lovullo said. “And I think we’re all adrenaline junkies. You win the game, there’s that rush. We’re in a good spot.”

Good, and getting better all the time.


The Diamondbacks have won 10 of their last 11 games and 13 of 17, leaving them 2½ games behind the Cubs for the final NL wild card. Chicago lost to Milwaukee 7-1 Friday. Arizona improved to 74-67, matching its season high at seven games over .500.

It wasn’t all positive for the Diamondbacks, however.

Left-hander Robbie Ray left in the fifth inning because he felt a blister starting to form on his left middle finger. Ray has been Arizona’s most dependable starter lately, losing only once in the last two months. He didn’t want to leave the game, but relented when Lovullo reminded him of the bigger picture.

“It was the smart thing to do with what we’re trying to accomplish,” Ray said.

Kevin Ginkel (2-0) pitched two innings. Bradley allowed a pair of singles and a walk in the ninth before retiring Curt Casali on a fly ball for his 13th save in 16 chances.

“There were lots of things that didn’t go in our favor, but if you’re a baseball fan, that was fun to watch,” Reds manager David Bell said.


Marte and Rojas have been integral parts of Arizona’s playoff push. They were at the center of it again Friday.

Nick Ahmed led off the third inning with his career-high 18th homer off Tyler Mahle (2-11). The Diamondbacks then took control with five runs in the fifth inning.

Ray reached on a single when he bunted over Mahle’s head while trying to sacrifice. Marte followed with his career-high 31st homer for a 4-2 lead. Marte also had a grand slam Wednesday during a 4-1 victory that finished a sweep of the Padres.

Mahle wanted to throw a certain pitch to Marte, but went with the cut fastball that Casali called instead. Mahle left it over the plate.

“Next time, go with my gut feeling,” Mahle said.

Rojas’ two-run single completed the rally and left him with hits in seven of his last eight games.

Ray went over 200 strikeouts for the third time in his career. Only Randy Johnson has done better with the Diamondbacks, putting together five 200-strikeout seasons.

The Diamondbacks play three in Cincinnati followed by four against the Mets in New York for their second-to-last trip. The Diamondbacks finish with 12 of their last 15 games at home and three in San Diego.

Arizona has a club-record 119 homers on the road, three more than the previous club mark from 1999.

Arizona has 31 homers in its last 15 games at Great American Ball Park.

Arizona right fielder Jarrod Dyson made a diving catch on Aristides Aquino’s sinking liner with two runners aboard in the seventh.

Infielder Domingo Leyba was called up from Triple-A Reno. The Diamondbacks waited to see how he recovered from an ankle injury before adding him.

Diamondbacks: Steven Souza Jr. is on the trip to see Reds team physician Tim Kremchek, who repaired ligaments in the outfielder’s left knee in April. … Luke Weaver threw a simulated game Friday. The Diamondbacks aren’t sure of his next step in recovering from right forearm tightness.

Reds: CF Nick Senzel was out of the lineup for a third straight game with a sore right shoulder.

Reds: Luis Castillo (14-5) has won his last three starts. He’s 1-3 in four career starts against the Diamondbacks with a 5.01 ERA.