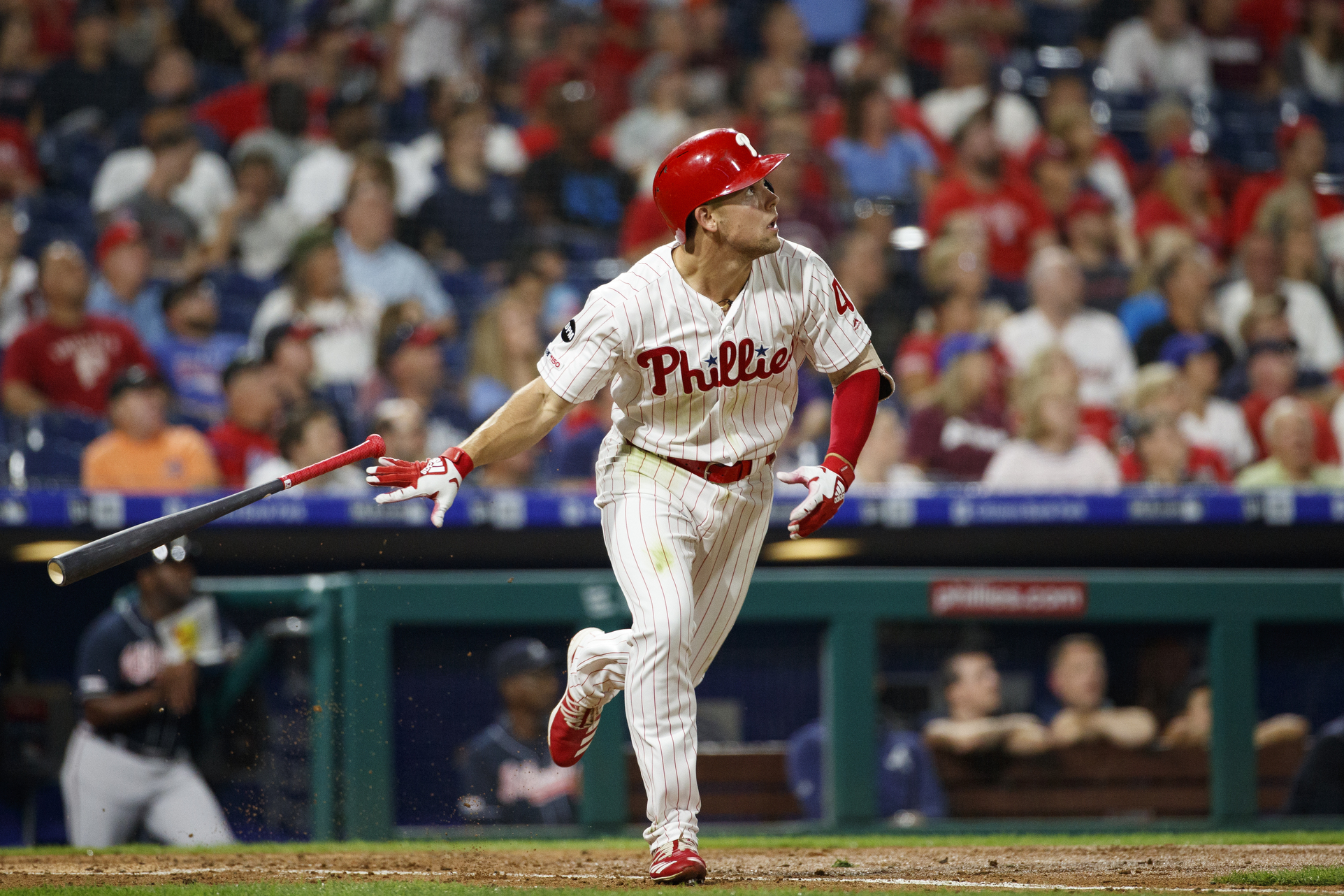 PHILADELPHIA — Scott Kingery timed a diving catch just right. He hustled around the bases for a thrilling inside-the-park home run.

Kingery was in the right place for the Phillies — except in the clubhouse.

“Go stand in your locker. Have you ever done this before,” J.T. Realmuto kidded his teammate as a media scrum spilled a few lockers down.

Kingery hopes to keep the Phillies moving in their playoff push.

Philadelphia closed within two games of the Chicago Cubs for the NL’s second wild card.


Realmuto, Bryce Harper and Dickerson all homered in the first inning, Kingery excited fans with his race around the bases and Dickerson tacked an insurance run with a solo shot late to help the Phillies win for the third time in four games.

The Phillies played in front of an announced crowd of just over 24,000, and the seats were largely empty against the NL East leaders in the late innings. But there were plenty of boos when Atlanta’s Johan Camargo hit a solo shot off Jared Hughes in the eighth to make it 6-5.

Blake Parker (3-2) pitched two scoreless innings of the relief for the win. Hector Neris worked a scoreless ninth for his 25th save.

The Phillies came out swinging in the first against starter Max Fried (16-5). Realmuto opened the home run surge when he clanged his 24th of the season off the left field foul pole for a 1-0 lead. Harper drilled the next pitch into right for his 31st home run to give the Phillies back-to-back homers for the eighth time this year. Rhys Hoskins came inches from a third straight home run, but settled for a double off the center field wall.

Braves pitching coach Rick Kranitz came out to settle Fried, but it didn’t work. Dickerson lined a shot over the right field wall for a 4-0 lead and Philadelphia homered three times in the first for the first time since 2009.

“It’s a good-hitting team over there and when you leave some pitches over the middle of the plate that aren’t as sharp as they normally are, they’re going to hit them,” Fried said.


The Phillies went deep off Fried one more time in the third inning to take the lead for good. Kingery hit a deep shot that centerfielder Ronald Acuna Jr. brought back from over the fence. But the ball popped out of his glove and Kingery scampered all the way around for a head-first slide and inside-the-park homer and a 5-4 lead.

His head-first slide was an instant season highlight.

“One of the more exciting plays we’ve seen all year,” Kapler said.

Freddie Freeman and Dansby Swanson cut it to 4-2 with RBI singles. With the bases loaded and one out, Francisco Cervelli hit a dribbler toward the mound that Vargas scooped with his mitt and shoveled to Realmuto. Vargas had time for a clean exchange but the hustled toss turned into an error and made it 4-3. Austin Riley’s deep drive to center was snagged by Kingery on a diving catch, but the sac fly was enough to tie the game at 4-all.

Dickerson added a solo shot in the sixth for a 6-4 lead.

Phillies: RHP Pat Neshek had surgery on a torn left hamstring and his Phillies career appears over pitching in just 50 games over two seasons. … RHP Seranthony Dominguez is set to play catch on Wednesday as he recovers from an elbow injury.

Harper’s homer went 443 feet, his sixth of the season of 440-plus feet. He has 13 homers off lefties this season.

Harper saved at least another run in the third when his one-hop throw to third nailed Ozzie Albies for an out.