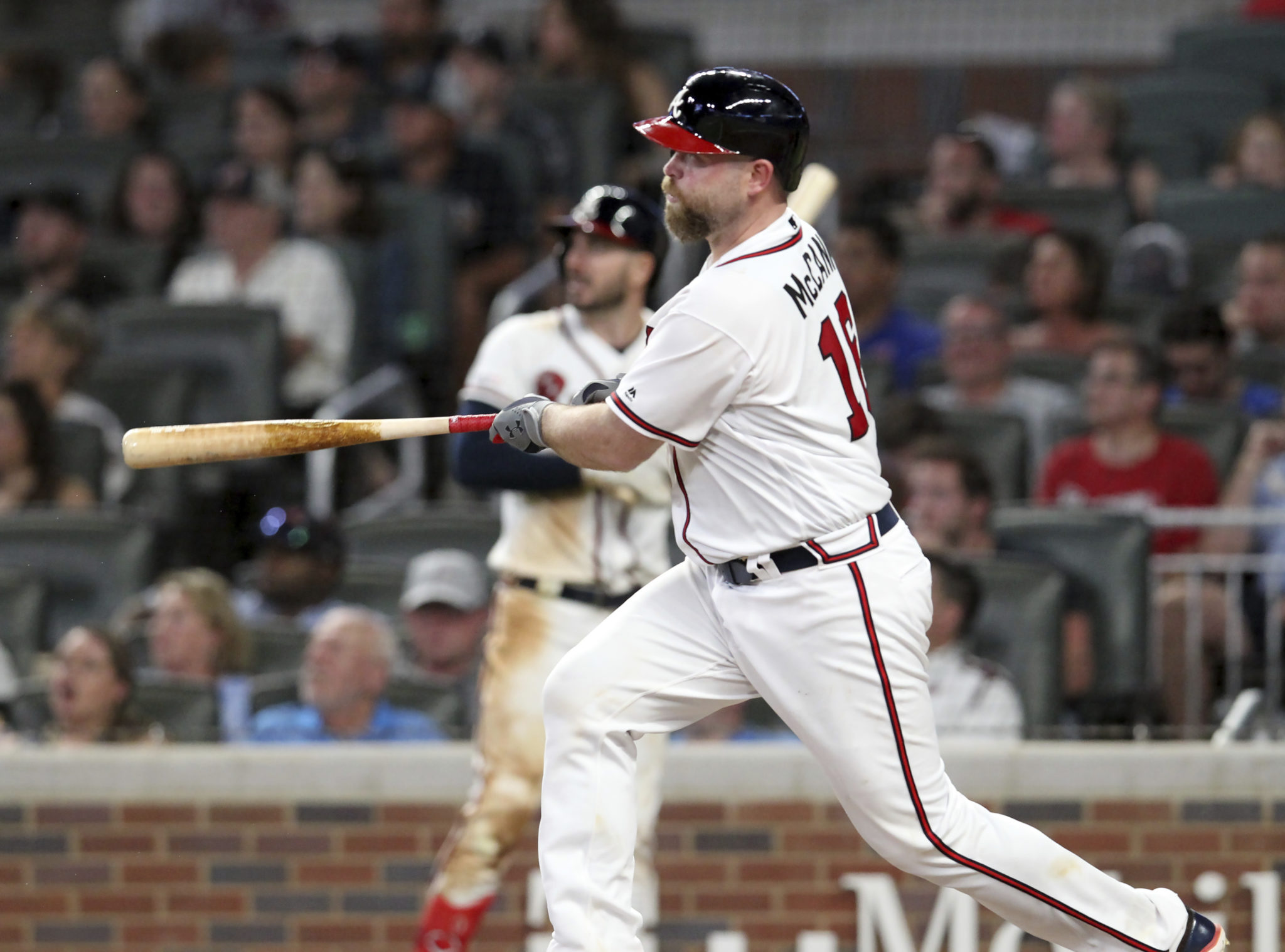 ATLANTA — Josh Donaldson and Ozzie Albies each homered for the second straight day and the streaking Atlanta Braves set off another celebration with their ninth straight victory, 5-4 over the Washington Nationals on Saturday night.

Brian McCann and Matt Joyce hit back-to-back homers in a three-run sixth inning, helping the NL East leaders to their longest winning streak in five-plus years. Atlanta, 20-4 since Aug. 11, has won 13 in a row at home, most in the major leagues since Cleveland had a 13-game string in 2016.

The Nationals still lead the NL wild-card race despite losing four in a row for the first time since May 19-23. Washington fell 10 games back in the division race.


Albies hit his 21st homer, an opposite-field shot to left into the Washington bullpen, in the first. Donaldson homered for the 36th time, this one a 443-foot shot into the left field seats in the fourth, and the slugger known as the Bringer of Rain grabbed his black umbrella for another wet dugout dance with his teammates.

Donaldson, the 2015 AL MVP, has 28 homers since June 11. He began the night tied with Mike Trout for the major league lead in homers over that span.

Julio Teheran (10-8) made his 30th start for the seventh straight season, allowing one run and three hits in five innings. His 219 starts since 2013 are fourth-most in the majors, and no pitcher has made as many starts for a single team during that span.

Asdrubal Cabrera’s 16th homer trimmed the lead to 2-1 in the fifth. McCann answered in the bottom half of the inning with a two-run shot. He and Joyce each took Hunter Strickland deep to right.


Nationals starter Austin Voth (1-1) allowed two runs and three hits in four innings. Washington had the bases loaded with no outs in the seventh, but came away with one run against Darren O’Day and Sean Newcomb. Juan Soto’s two-run double cut the lead to 5-4 in the eighth.

Mark Melancon faced the minimum in the ninth to earn his ninth straight save for Atlanta. The 16th capacity crowd at SunTrust Park stood and cheered as Melancon faced Matt Adams, the last batter, and threw a called third strike.

Nationals: RF Adam Eaton (right knee) went 0 for 3 in returning to the lineup for the first time since he was hit by a pitch Aug. 28. He had gone 0 for 3 as a pinch-hitter. … LHP Roenis Elías will return to Washington on Sunday for the team’s medical staff to examine his right hamstring strain.

Braves: RF Nick Markakis (left knee) is taking batting practice and will likely play in a couple of sim games next week in Philadelphia. Markakis has missed 39 games since getting hit by a pitch.

After making his comeback from Tommy John surgery and a career-threatening broken humerus, Nationals RHP Aaron Barrett was consoled by manager Dave Martinez as he wept in the dugout following his first major league appearance in four years. Barrett was visibly crying as Martinez brought him a towel and put his hand on his shoulder. Barrett faced four batters in a scoreless fifth.

The Braves last won nine straight games from June 27-July 5, 2014. … The home winning streak set a modern-day franchise record and is five off the franchise mark set by the 1897 Boston Beaneaters. … Atlanta has won five in a row and won nine of 12 against Washington.

Washington: RHP Max Scherzer (9-5, 2.60 ERA) will make his fourth straight start since returning from back trouble. The three-time Cy Young Award winner has no decision and a 4.66 ERA in his last four outings.

Atlanta: RHP Mike Soroka (11-3, 2.53 ERA) will make his fourth career start against Washington in a matchup of starters with the NL’s second- and third-best ERAs.