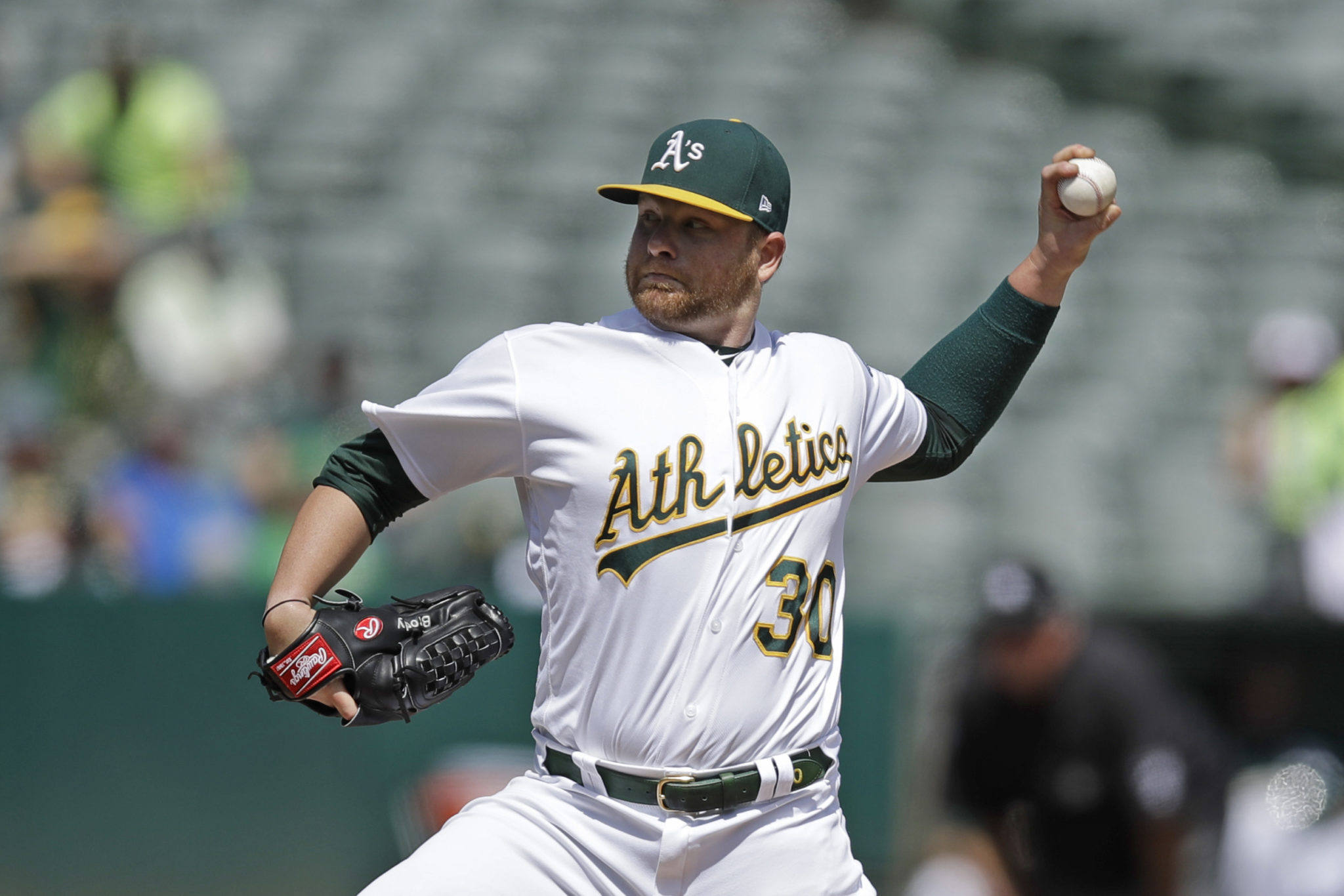 OAKLAND, Calif. — Manager Bob Melvin is fond of saying the Athletics are at their best when hitting home runs and showing patience in the batter’s box.

Pinch-hitter Robbie Grossman delivered a two-run triple over center fielder Mike Trout’s head as part of a seven-run eighth inning when the A’s benefited from four consecutive walks, and Oakland rallied to beat the Los Angeles Angels 10-6 on Thursday to complete a three-game sweep.

“That’s just the mentality of this team,” Grossman said. “How many times this season has something like that occurred? This team’s full of confidence. We never feel like we’re out of it.”


Oakland remained a half-game behind Tampa Bay for the top AL wild card. The Athletics hold the second spot, a game ahead of Cleveland.

The A’s trailed 6-1 and had only four hits before batting around in the seventh, when the Angels used five pitchers.

Josh Phegley started the comeback with a two-run homer off José Suarez. Ty Buttrey (6-7) came on and allowed Marcus Semien’s single, followed by walks to Matt Chapman, Matt Olson and Mark Canha to force in a run. Jurickson Profar walked to force in another run, and Khris Davis added an RBI groundout.

Grossman followed with a first-pitch triple off Adalberto Mejía that sailed past Trout’s outstretched glove as he jumped for the ball near the fence. Grossman, who bats primarily left-handed, switched to the right side when the lefty Mejía was brought in.

“He doesn’t have a ton of right-handed at-bats this year but I think it’s probably a low-maintenance swing for him,” Melvin said. “He was ready for it and he was aggressive coming off the bench with guys on base.”


Grossman’s triple was the 13th extra-base hit by A’s pinch-hitters this season, tying the Oakland record set in 1968. Overall, the A’s are 23- for-81 in pinch-hit situations.

“Pinch-hitting, you have to be aggressive early,” Grossman said. “You have to see where you’re at on the first pitch and I put a good swing on it. Luckily Mr. Trout didn’t catch it.”

Profar drove in three runs and Semien had four hits for Oakland.

The A’s moved a game ahead of Cleveland for the second AL wild card. The Indians lost 7-1 to the Chicago White Sox earlier Thursday.

Trout hit his 45th home run to tie for the major league lead. The towering, two-run drive off Brett Anderson landed high in the seats in left-center and was estimated at 455 feet. Pete Alonso of the New York Mets also has 45 homers.

“I thought (Anderson) might go with a first-pitch fastball so I would hit a groundball,” Trout said. “It’s tough to have a lead like that and lose.”

A.J. Puk (1-0) retired six batters for his first career win. Puk, one of Oakland’s top pitching prospects, had not pitched since Aug. 26.


WINNING STREAK ON THE LINE

The A’s had a 10-game winning streak in mid-May, their longest undefeated run since 2006, but that could change on Friday. Oakland will resume a game against the Tigers from the middle of that streak that was suspended on May 19 at Detroit.

Oakland leads 5-3 in the bottom of the seventh, and the game will be concluded at the Oakland Coliseum before a regularly scheduled night game. If the A’s hold on, the winning streak will go to 11 games. If the Tigers rally, Oakland’s streak will only be considered a seven-gamer.

The A’s will be using what Melvin calls a “fluid” six-man rotation for the next few weeks. Sean Manaea, who pitched five scoreless innings against the New York Yankees in his season debut Sept. 1, will make his next start Sunday against Detroit.

Athletics: Yusmeiro Petit has left the team and flown to Venezuela for personal reasons and it’s uncertain when the versatile reliever will be back. Petit leads the AL in appearances (71) and fewest walks per nine innings (0.86). The San Francisco Chronicle first reported Petit’s absence. … CF Ramon Laureano (right lower leg stress reaction) is expected to come off the injured list and play in the second of Friday’s two games against Detroit. … Stephen Piscotty (sprained right ankle) is still using a walking boot.

Angels: LHP Dillon Peters (3-2, 4.13 ERA) faces the Chicago White Sox for the first time in his career Friday night. Peters has allowed three earned runs or fewer in 11 of his 12 outings this season.

Athletics: RHP Homer Bailey (12-8, 4.96) takes a three-game winning streak into Friday’s start against Detroit. Bailey is unbeaten in nine starts against teams from the AL Central.