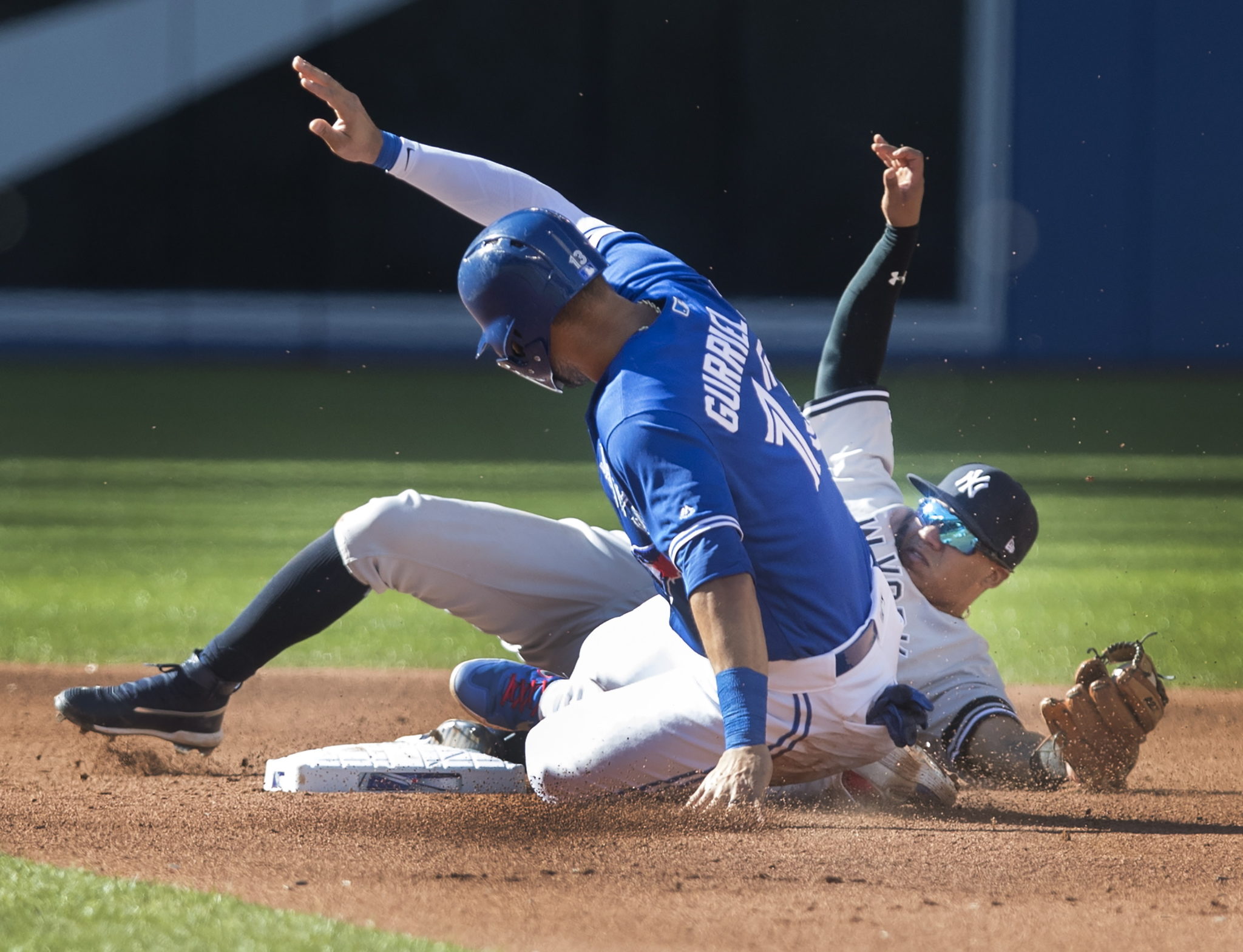 TORONTO — With his glove and his bat, Yankees outfielder Brett Gardner helped teammate James Paxton power his way to a ninth straight win.

Gleyber Torres and Luke Voit also homered for the Yankees, going back-to-back off right-hander Brock Stewart in the fifth, as the AL East leaders won for the 14th time in 19 games.

It was the ninth multi-homer game of Gardner’s career and his second this season. He also hit two at Detroit Tuesday.


“He is killing it,” Paxton said. “He’s been great for us all year long, in the outfield and at the plate. Really doing it all.”

Torres connected one inning after slipping while trying to make a throw to first and appearing to hurt his right leg or knee. Torres was checked on the field and stayed in to hit his 37th homer before being replaced by Tyler Wade in the sixth.

Torres said his sore leg was “no big deal.”

DJ LeMahieu had four hits for New York, his AL-leading 58th multi-hit game of the season. The Yankees had 19 hits, matching their season high for a nine-inning game.

New York failed to homer Friday, snapping a nine-game streak. The Yankees have 20 homers over their past seven games, and have hit multiple home runs in 14 of their past 19. They have an MLB-best 285 home runs this season, which is also a big league record for homers by any team in a year.


“I didn’t have a lot in the tank today,” Paxton said, “didn’t have the best stuff, but was able to make pitches when I needed to to get out of innings.”

Mussina won his final two starts of the 2002 season, then seven straight to begin 2003. The last Yankees pitcher to win nine straight starts in the same season was Ron Guidry, who won 11 in a row in 1979.

Gardner homered off right-hander Jacob Waguespack to begin the fourth, then added a three-run blast off Stewart in the fifth. He has 25 homers, extending his career high.

“We wouldn’t be this well-off without him, that’s for sure,” manager Aaron Boone said.

Gardner has 20 career home runs against Toronto, more than any other opponent.

The veteran outfielder also made a great play in center, leaping into the scoreboard to catch a drive by Toronto’s Danny Jansen in the fifth. According to Statcast, Gardner ran 126 feet to make the play.

“He just continues to play on both sides of the ball so well,” Boone said.

“When you face these lineups, from top to bottom everybody is good,” Waguespack said. “They’re capitalizing on mistakes. With runners on base, you really have to execute your pitches.”

Yankees: RHP Dellin Betances (lat) will fly to Toronto Saturday and is expected to be activated off the injured list Sunday, Boone said. Betances made his third rehab appearance with Double-A Trenton Friday, allowing one run and two hits in one inning. He has not pitched for the Yankees this season. … SS Didi Gregorius got the day off. Gregorius played both games of Thursday’s doubleheader and played all 12 innings Friday.

Blue Jays: LHP Tim Mayza has a torn ligament in his left elbow and will undergo Tommy John surgery. Mayza came on in the 10th inning Friday and went down in pain after a wild ball four to the first batter he faced. Mayza has pitched in a team-high 68 games. He’s expected to miss the 2020 season. … RHP Jordan Romano left in the eighth after he was struck by Gardner’s liner and injured his right ankle as he fell. Romano had to be helped off the field. … OF Lourdes Gurriel Jr. returned to the lineup as the designated hitter after missing 30 games because of a strained left quadriceps. Gurriel doubled in his first at-bat and was hit by a pitch the second time up. He finished 2 for 3. … C Luke Maile (left oblique) was activated off the 10-day injured list.

Paxton, who is from British Columbia, is 4-1 in six career starts in Canada.

Twenty-one of Torres’ 37 homers have come against AL East opponents.

Yankees: LHP Jordan Montgomery will return from elbow surgery last year to start Sunday’s series finale. Montgomery has not pitched in the majors since May 1, 2018.