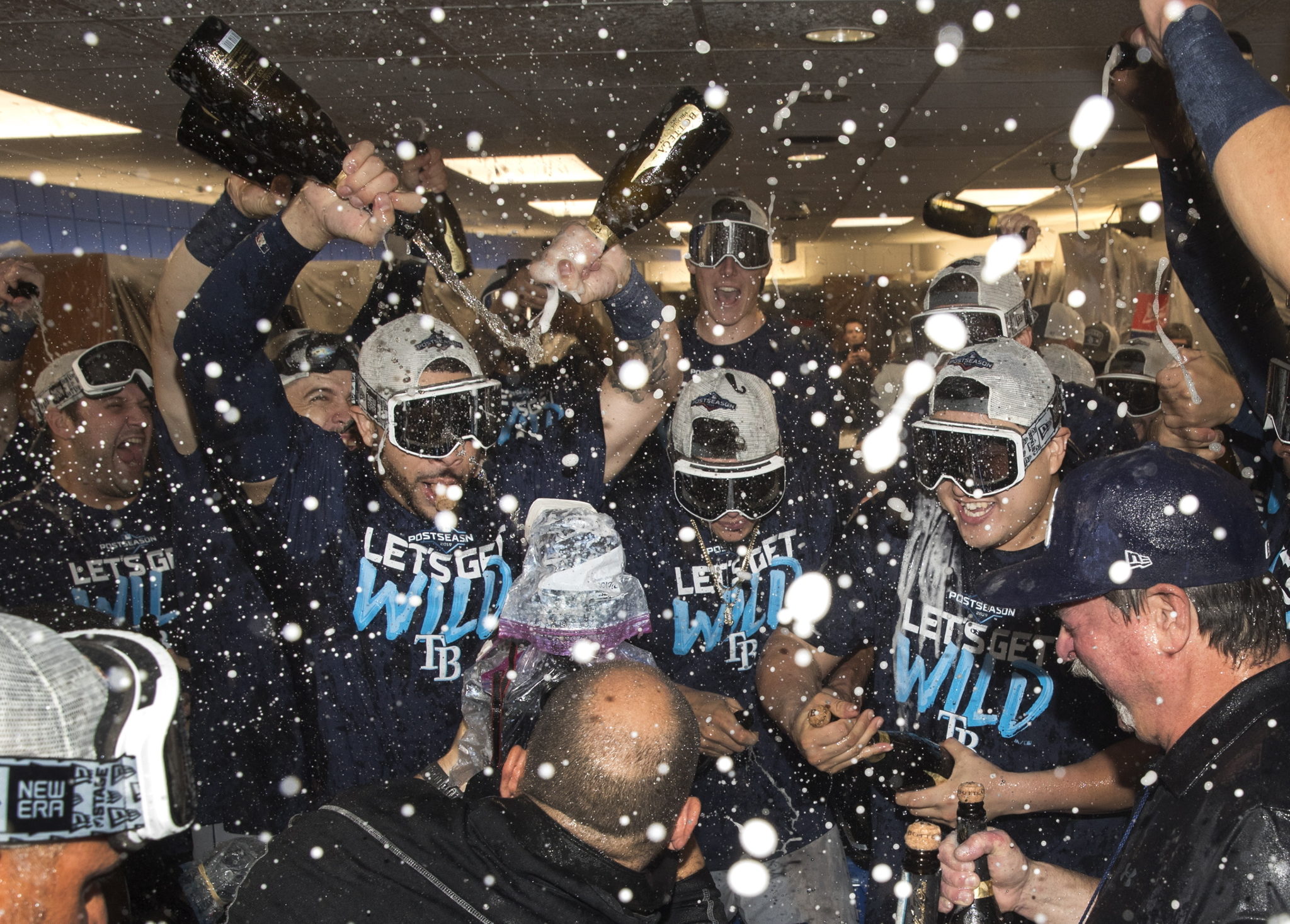 This year, 96 proved to be the number the Rays needed to reach the postseason.

Tampa Bay returned to the playoffs for the first time since 2013, clinching an AL wild card berth with a 6-2 win over the Toronto Blue Jays on Friday night behind Tommy Pham’s two-run homer and Tyler Glasnow’s 4 1/3 hitless innings.

“This organization has created a very winning culture, and there’s been a little bit of a drought,” fifth-year manager Kevin Cash said. “We get to hang another banner, we want to hang some more. Really happy to be a part of it.”

Tampa Bay will play Oakland on the wild-card game on Wednesday night. The Rays will start Charlie Morton.


At 96-64, the low-budget Rays have their most wins since 2010 and can tie or surpass the team record of 97 set in 2008, when they won their only AL pennant and lost to Philadelphia in the World Series.

“That’s what we dream about, coming to the big leagues and going to the postseason, and now we’re here,” shortstop Willy Adames said. “This is just the first step.”

After last season, when Boston finished first in the AL East with 108 wins and the New York Yankees second with 100, Cash challenged his team to improve.

Tampa Bay began the night with a magic number of two to clinch, and Cleveland lost 8-2 at Washington while the Rays were in the eighth inning.

Jubilant players poured out of Tampa Bay’s dugout for a celebration around the mound after right-hander Emilio Pagan retired Reese McGuire to end it.

“We do some crazy stuff and people scratch their heads a lot,” Cash said. “These guys don’t care. They want to win.”

Several Toronto players, including rookies Bo Bichette and Vladimir Guerrero Jr., watched from the dugout as the Rays partied on the field.

“That’s something we want to be doing in a couple of years,” Blue Jays rookie infielder Cavan Biggio said.

“I’m really happy for them. I’m not going to lie,” Montoyo said.

Austin Meadows also homered for the Rays, hitting his 33rd this season off Ryan Dull in the ninth.


Making his fourth appearance since returning from the injured list after missing 107 games because of a strained forearm, Glasnow threw 66 pitches, including 35 strikes, a 14-pitch increase from his previous outing. The right-hander struck out four and walked two.

“We’ve got him close to where he’s like a normal starter now,” Cash said. “We’ll continue to monitor the workload but for him to be able to get to that 85 (pitch) mark would be really, really nice.”

Glasnow had pitched three innings in each of his two prior starts.

“I feel great,” Glasnow said. “Recovered great after every inning so I’m looking forward to playoffs.”

Left-hander Colin Poche replaced Glasnow and immediately gave up a double to Teoscar Hernández, his first batter, before retiring the next two.

Pham homered in the third, and Willy Adames made it 3-0 with a two-out RBI single in the fourth.

Hernández hit a two-run homer in the seventh off Oliver Drake (5-2).

Biggio became the first player in Blue Jays history to bunt for a double when he reached in the sixth. With the Rays in a four-man outfield alignment as he batted in the sixth, Biggio lofted Poche’s first pitch into the vacant area in shallow left field, ending up at second base.

Biggio improved to 14 for 14 in stolen base attempts, extending the longest streak to start a career in Blue Jays history.

Rays: 1B Ji-Man Choi (left foot) did not start and is day to day. Choi remained in Florida undergoing additional tests to confirm there are no fractures in his left foot, hit by a foul Wednesday. … “He’s not moving around too quick right now,” Cash said. … INF Yandy Díaz (left foot) will play in an instructional league game Saturday and could rejoin the team Sunday. Díaz has been out since July 23 and is on the 60-day IL.

Blue Jays: SS Bo Bichette (concussion) fielded ground balls before the game but has not been cleared to return.

Rays: Tampa Bay had not announced a starter for Saturday.

Blue Jays: RHP Trent Thornton (5-9, 5.00) has allowed 15 earned runs in 16 innings over four starts against the Rays this season.