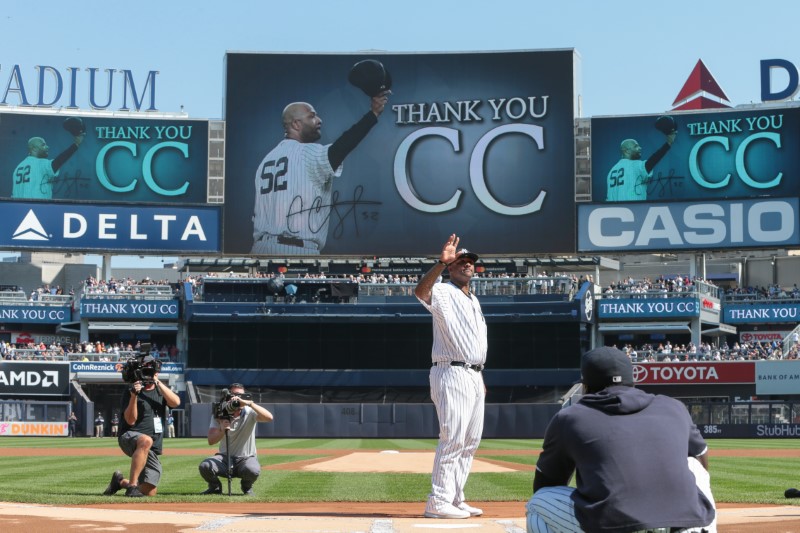 The New York Yankees celebrated the career of left-hander CC Sabathia before Sunday’s game against the Toronto Blue Jays, his last regular-season home game at Yankee Stadium before he retires.

The 39-year-old has spent the past 11 seasons of his 19-year-career with the Yankees, and he was honored with a pair of touching video messages that drove him to wipe tears from his face.

The Yankees presented him with parting gifts: a painting marking his career highlights and a 10-day trip to Japan for him and his family. He threw out the ceremonial first pitch to his mother, Margie, because she was his first catcher.


Sabathia will pitch out the bullpen for the Yankees in the postseason and is expected to get some relief work in the season’s final week. In his career, which includes 560 regular-season games and another 24 in the postseason, he has made just one relief appearance.

That came in Game 5 of the 2011 American League Division series, which the Yankees dropped three games to two to the Detroit Tigers. Sabathia threw 1 1/3 innings, giving up two hits and one run while walking two and striking out four.

“When the team needs it, you do whatever you can,” said Sabathia, who is 5-8 in an injury-interrupted season. “This is my role going forward so I’m going to embrace it. Hopefully, I can step up and fill it.”

“I don’t think I’m going to miss the competition. I think I’ll miss the guys,” Sabathia said. “I think 19 years of pitching the way that I have, emotionally, I’m kind of exhausted. It’ll be good next year to just give that a break and give my body a break. But I’ll definitely miss the guys, the relationships I have in here. That’s what I’ll miss the most, for sure.”