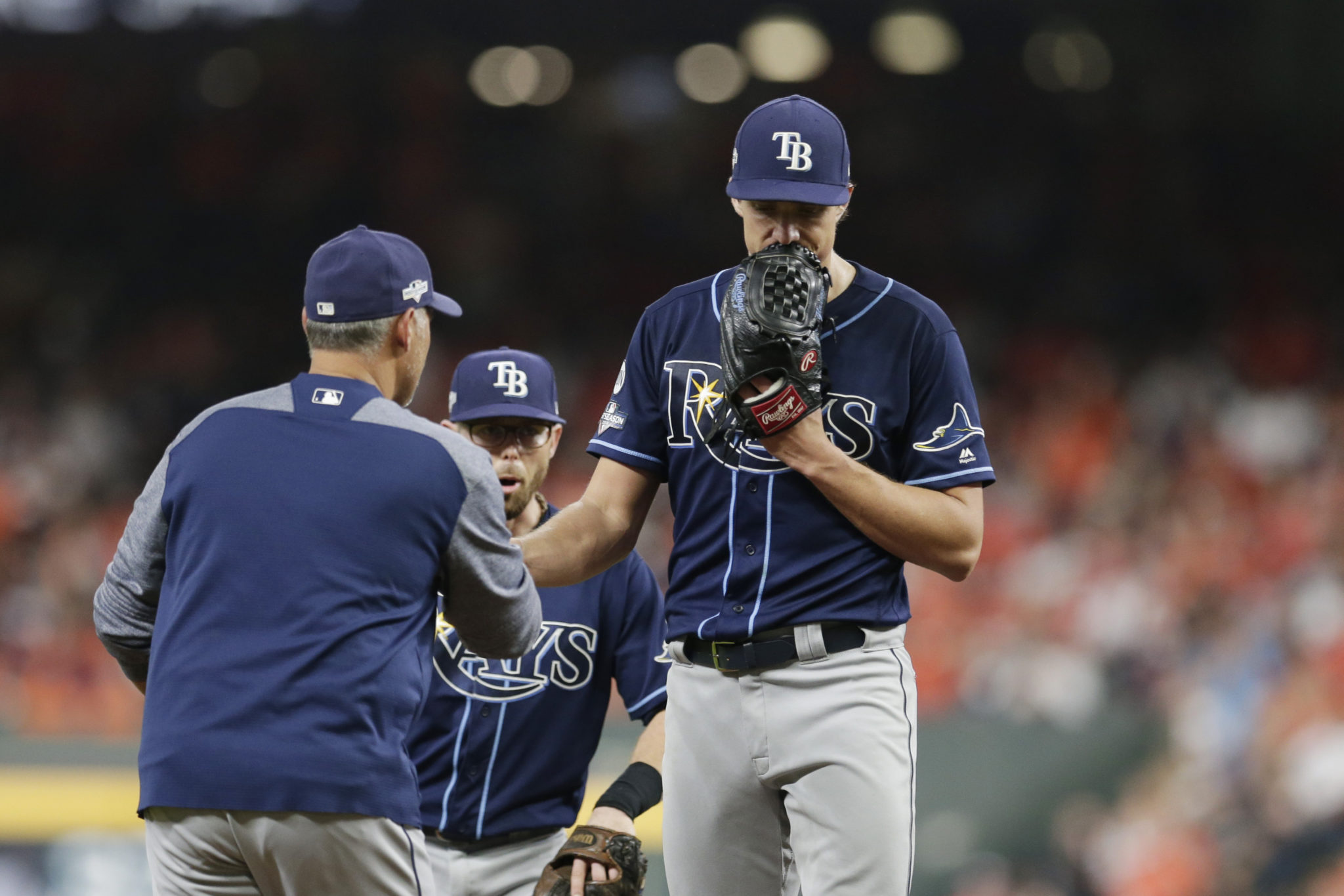 Unable to beat three aces in a row, the Tampa Bay Rays finally folded against Houston.

With baseball’s most inexpensive roster, the young Rays tried all they could to avoid elimination again Thursday night. They started an infielder who had barely played in the last month, went to their bullpen early to bring in their own Cy Young Award winner and kept changing pitchers the way they had throughout the playoffs.

In the end, they couldn’t win three straight AL Division Series games against a trio of Astros arms with a combined salary of $66 million — about the same as the entire Tampa Bay payroll.

Gerrit Cole struck out 10 more Rays in eight innings, following his 15-strikeout performance in Game 2, and Houston won 6-1 in the decisive Game 5 to advance to a third consecutive AL Championship Series.

After victories at home over Cy Young winners Zack Greinke and Justin Verlander to force this juicy series from Tropicana Field back to Minute Maid Park, the plucky Rays returned to Houston somewhat perturbed by a perceived lack of credit for what they had done.


Before winning Games 3 and 4 to extend the ALDS, they had already avoided an early exit by winning the wild-card game in Oakland.

“I don’t know about everyone else, but I got annoyed of hearing about Houston this, Houston that. … They weren’t talking about us at all,” said Blake Snell, last season’s AL Cy Young Award winner.

“Everybody is counting us out already. They’re making the schedule the Yankees and the Astros,” shortstop Willy Adames said before Game 5.

Well, make way for the AL East champion Yankees and the AL West-winning Astros. Game 1 of the ALCS is Saturday night in Houston.

Except for a home run by journeyman second baseman Eric Sogard, in his first start since Sept. 14 because of lingering right foot discomfort, the Rays couldn’t muster much against the major league strikeout leader who next month could become the third Cy Young Award winner on Houston’s 2019 staff.

Cole set the tone by striking out the first two batters of the game. Rays starter Tyler Glasnow, like Cole a former Pirates pitcher before Pittsburgh traded away both right-handers in 2018, allowed hits to his first four batters — and all scored.

After Ji-Man Choi’s single leading off the fourth for Tampa Bay’s only other hit, Cole got 15 outs over the next 15 batters — benefiting from a double play after a walk in the seventh.

Tampa Bay pitching coach Kyle Snyder made a mound visit only three batters, and seven pitches, into the game.

Based on how Jose Altuve and Alex Bregman communicated things to teammates after they had back-to-back RBI hits in the first, Glasnow may have tipped some of his pitches while the crowd roared and twirled all those orange rally towels above their heads.

The 26-year-old right-hander threw 31 of 40 pitches for strikes and struck out three, but was done after 2 2/3 innings. Snell, the Game 2 loser who had a save in Game 4, took over for 1 1/3 innings before manager Kevin Cash used seven more relievers to finish the game — six of them didn’t even throw a full inning.

Tampa Bay used at least five pitchers in every game, and an ALDS-record 31 overall in the five-game series.


Sogard, acquired in a July trade from Toronto, hadn’t started since Sept. 14. His only playoff appearance before the ALDS finale had been as a pinch-hitter in Game 1 on Friday, when he had an RBI single.

Cash valued Sogard as a “very high contact-oriented hitter” and put him in the middle of the lineup batting fifth. He started at second base after rookie Brandon Lowe had started there the first four games.

But the Rays were down 4-0 before Sogard went deep to right on the first pitch of the second inning.

They never got any closer.