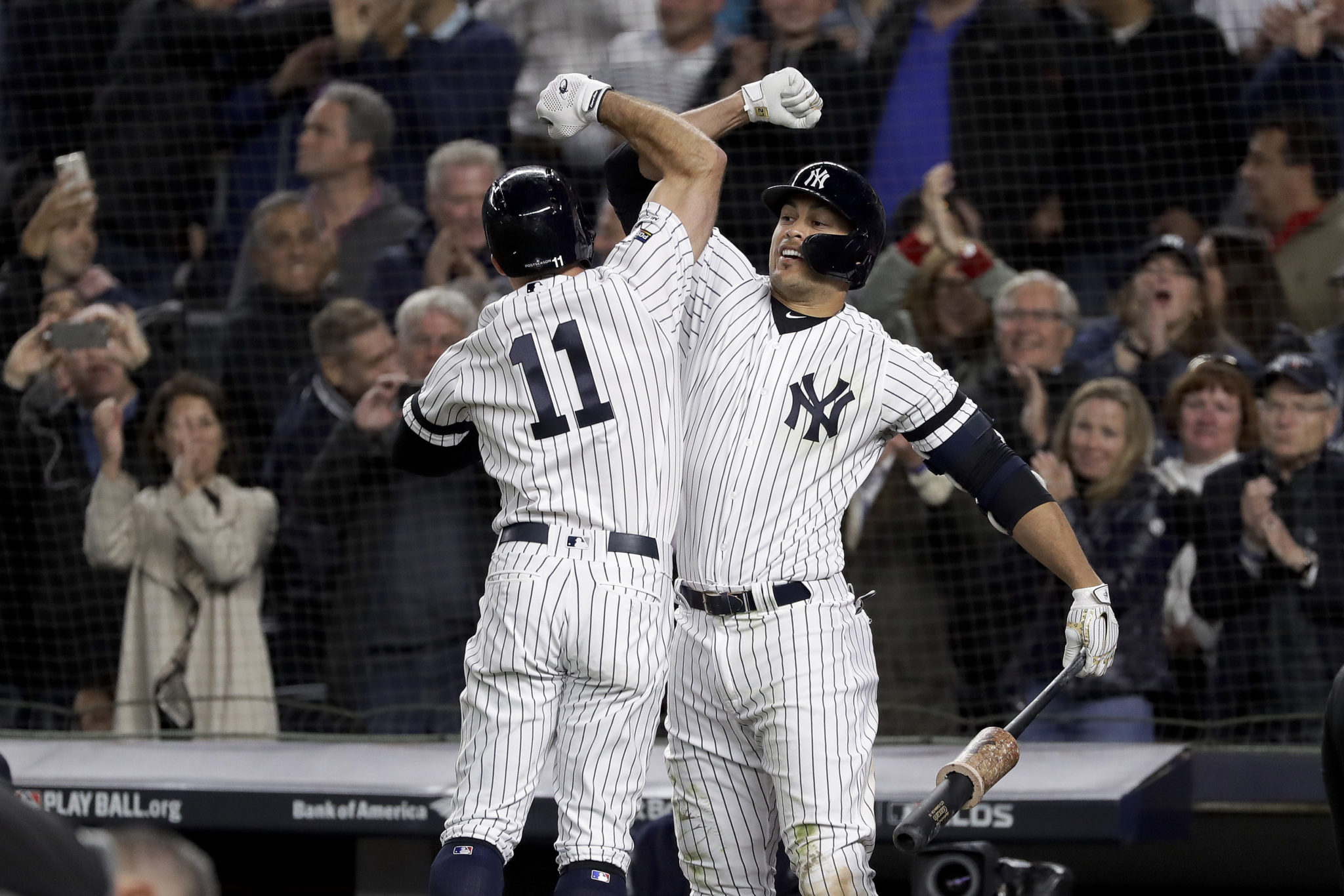 DJ LeMahieu homered and drove in four runs, Gleyber Torres broke a tie with a two-run double and the Yankees extended their October mastery of Minnesota with a 10-4 victory Friday night in the AL Division Series opener.

Aaron Judge made two diving catches in right field as the AL East champions handed Minnesota its major league-record 14th consecutive playoff defeat — 11 of them to the Yankees since 2004. The second grab thwarted a potential rally and left grateful reliever Zack Britton with both hands on his head to end the top of the seventh, when the Twins were still within striking distance.

“That was huge,” Judge said. “This is the postseason — you’ve got to make those plays.”

Brett Gardner also went deep for the Bronx Bombers in a playoff matchup between teams that finished neck-and-neck for the most home runs in baseball history. Minnesota’s Bomba Squad socked 307, one more than New York as both clubs blew away the previous mark of 267 set by the Yankees last year.


But in the 14th postseason meeting of 100-win teams, it was more of the same Yankees dominance against the Twins — even though many of Minnesota’s players and coaches weren’t around for most of it.

“We’re not out of it by any stretch of the imagination, but we need to show up tomorrow and hopefully turn those solo homers into maybe three-run homers and we’d be in this,” first baseman C.J. Cron said. “It’s going to be a tough series. We knew that coming in.”

Jorge Polanco, Nelson Cruz and Miguel Sanó homered for the Twins, who were hurt by eight walks.

“We had some good swings. We had our moments. Just by chance, there was no one on base when we popped a few balls over the fence,” manager Rocco Baldelli said after his first playoff game as bench boss.

Rookie reliever Zack Littell, a former Yankees farmhand who was traded to the Twins, took the loss after a brief and messy outing. With the score tied in the fifth, he walked Judge, threw a wild pitch and plunked Gardner.

Giancarlo Stanton drew the second of his three critical walks to load the bases, bringing up the 22-year-old Torres. He fought back from 0-2 to a full count against Tyler Duffey and pulled a sharp one-hopper that deflected off the glove of a diving Sanó behind third base, giving New York a 5-3 lead.


“Big time at-bat against a guy that was really tough on righties,” Yankees manager Aaron Boone said. “That hit I think really, really got us rolling.”

Sanó sliced a solo homer in the sixth off winner Tommy Kahnle, who retired cleanup batter Eddie Rosario with two on to end the fifth.

LeMahieu, who dropped an easy popup at first base early in the game, made it 10-4 in the seventh when the leadoff man laced a three-run double off Kyle Gibson for his third hit. Fans in the sellout crowd of 49,233 chanted “MVP! MVP!” for the three-time All-Star and 2016 NL batting champ, who left Colorado to sign a $24 million, two-year contract with the Yankees last offseason.

“It’s like my worst nightmare, dropping a popup like that,” LeMahieu said. “I think in the playoffs, you’ve just got to kind of turn the page real quick, and the next big play is coming up.”

New York was down 2-0 before scoring three runs in the third against starter José Berríos. Edwin Encarnación knocked in one with his second double of the night, and two more scored when the Twins were unable to turn a potential inning-ending double play on Torres with the bases loaded.

With the 6-foot-6, 245-pound Stanton bearing down on him with a hard, clean slide directly into the bag, rookie second baseman Luis Arráez relayed low and wide to first. Cron reached for the throw and could have caught it, but the ball got past him and he was charged with an error that allowed two runs to score.

Polanco hit a tying single with two outs in the fifth to chase Yankees starter James Paxton from his postseason debut.

It took all of two batters and nine pitches for someone to hit a home run, when Polanco took Paxton deep. Cruz cleared the short right field porch with his 17th postseason homer in the third to make it 2-0.

“A lot of guys were on this 2017 team when we went down three to Minnesota (in the wild-card game),” Judge said. “Past experience like that you can feed off.”

Mike Fitzpatrick is a reporter for The Associated Press.